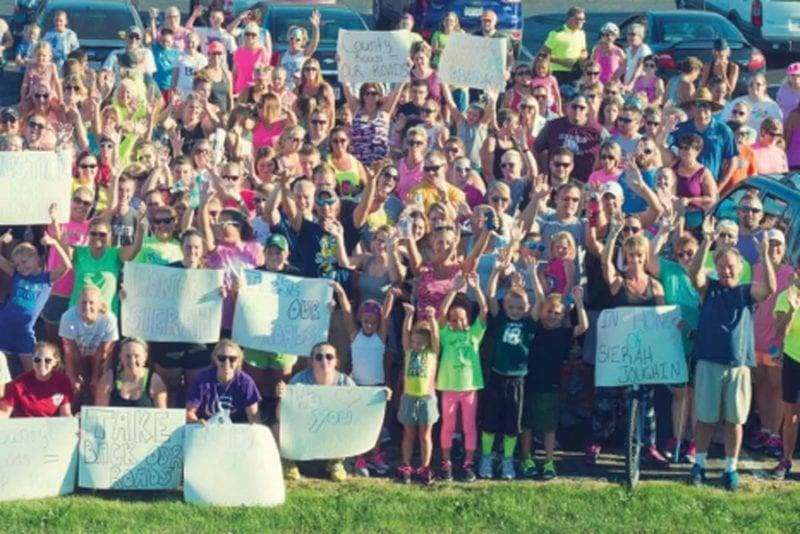 By: Tammy Allison
THE VILLAGE REPORTER

When the recent unimaginable, unthinkable tragic abduction and death of Sierah Joughin struck Fulton County in the vicinity of Evergreen High School, the rural community was shocked and devastated. As people struggled to deal with the situation in their own ways, Metamora resident Kathy Boger felt led to do something to put aside the fears and reservations and honor Sierah.

Boger, whose son graduated from Evergreen High School with Sierah, was on vacation the week of the horrific events. The night she returned from vacation, she felt a deep sense of fear hovering over her rural community. It stirred within her the need to do something to combat the fear and take back the streets. “It just hit me, I had to do something,” she expressed.

Her original plan had a twofold purpose: to organize a walk so everyone could be together to combat the fears and to honor the life and legacy of Sierah. She gathered some feedback from a group of local community members. It was decided to walk the same county road Sierah liked to travel. Boger sensed that people felt a strong need to be together and feel the closeness where Sierah had traveled so many times.

This event, “Take Back Our Roads” which she organized in a day and a half was met with overwhelming response from the community. Over 250 people flooded the parking lot of the Evergreen High School. Boger witnessed tears and hugging. “There were people there who hadn’t biked in a week. Others wanted to honor Sierah.” She estimated that a percentage of attendees had never met Sierah but wanted to attend to honor her memory.

The events of the week had left the community not only shocked, grieving, and devastated, but Boger sensed that people also in a way shut down. “Everyone was just scared,” she stated. The sense of safety in the rural, tight knit community had been rocked.

Boger was very happy with the response. “The walk set the tone, just being in the same area. Everyone there just felt safe and felt better. It was a very odd feeling.” Out of respect to Sierah and her family, the walk covered approximately 2-3 miles on County Road 6 from the school and did not venture beyond in the vicinity of the events.

“It was very important to people to walk on the road Sierah rode. It was symbolic,” Boger reflected. “Sierah was always an active person…she jogged, biked, and played sports.”

Boger has been overwhelmed with the outpouring of community support. “This was my idea, but Sierah brought the people. The sense of pride for our community has never been stronger for me than that moment.” Other future events planned in Sierah’s memory include a “Joggin’ for Joughin” 5K Sunday, October 2nd. For other ways to support and honor Sierah’s memory, visit the public Facebook page Justice for Sierah.

Tammy Allison may be reached at
publisher@thevillagereporter.com