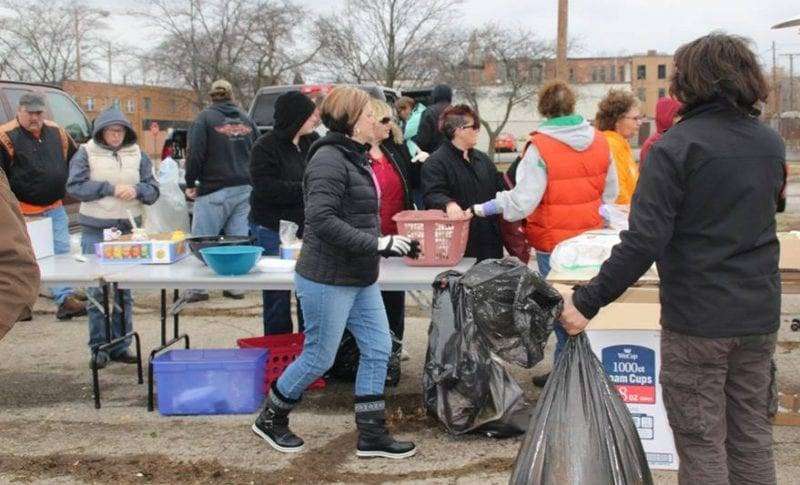 A Wauseon woman’s desire to help the homeless in Toledo has grown into a significant outreach effort.

Linda Wurns has been helping the homeless since she was 17. As a single mom, she lived on the east side of Toledo by herself and had to take the bus everywhere.

“It took hours to get home,” Wurns said of those long ago bus trips. “I met many homeless people.”

One of those was Elaine Higgins, known as The Bag Lady of Toledo. She once shared a lunch with her at a bus stop. Higgins had been a school teacher at one time, but became depressed after a house fire claimed her family. When Higgins died, she left the city a large sum of money.

Wurns befriended the homeless people who would watch out for her when she ran into trouble.

“I didn’t forget that because I think I could have got that into a lot of disaster,” Wurns said.

She began helping the homeless by herself before she moved to Wauseon. That didn’t keep her from filling a van and handing things out to the homeless in Toledo.

When social media came out she decided to see if anyone else would like to help. She made a simple post about what she did and how a few friends were going out to Toledo and would anyone like to join them.

“I did not know that a short 12 hours later of that posting that 212 people would want to go with me,” Wurns said. “I was having a meltdown because I didn’t know how to do that.”

Coordinating with so many people was a new challenge. Wurns had been helping the street people for so long it had become second nature.

“They wanted to do it but didn’t even know how to go about beginning to do that,” Wurns said. “So that’s how Take it to the Streets got started.”

So she began taking people down there to feed and clothe the homeless and that has gone on for four years. This year she had taken three groups and this was a year she wasn’t going to do any until one supporter contacted her.

“When your child is calling you and telling you ‘I have saved up all my stuff, when are we going to Toledo?’ I am not telling my child no.”

The first time they took a lot of items out and the second time the Swanton American Legion wanted to help on a big scale, Wurns said.

Together the two groups filled a box truck and handed out three-quarters of the contents to the homeless and the rest to a local church.

One of the people who helps Wurns is Erin Cottrell. She got involved four to five years ago.

“I was helping families in need via Facebook and Linda offered to help me with the items needed,” Cottrell said.

This was during that time Wurns was loading her van with food and clothing and driving the bus route downtown alone handing out items.

“Linda always said, ‘I am taking it to the streets,’” Cottrell said. “People began offering to help and hence the Facebook site.”

So as the effort has grown with more volunteers and events, Wurns and Cottrell continue to receive private messages from people asking for help for many situations. The work is not burden as Cottrell explains, “It is what we both do and we never could imagine not helping others.”

The organization is structured loosely and people do not have particular roles, Cottrell said. The task of helping others in need, keeps the group focused, she said.

Cottrell knows what it is like to live on the streets, having done so a teenager after growing up with a drug addict prostitute for a mother.

“I was passed around from home to home, children’s homes and many foster homes,” Cottrell said. “Many people helped me in my life and I feel it is only right to pay it forward.”

After so many people came out and said they were hungry, the American Legion decided they would go down and feed the people on the street. So Feb. 12 the groups took food out to the homeless and the end of the food line the people were given $5 gift cards to a fast food chain.

A large number of those served were veterans, Wurns said. She said anyone who says there are no veterans on the streets are wrong.

One was a female vet who is retired and confined to a wheelchair, Wurns said.

“They fell through that little loop,” Wurns said of the homeless veterans. “They didn’t want to fight the paperwork.”

One highlight was Wurns’ 10-year-old nephew who raised $400 on his own to by the food cards.

The homeless are frugal and the $5 cards can go a long way, Wurns said.

Having the American Legion there was a blessing and the organization could see for themselves first hand the plight of the veterans on the street.

“The most surprising thing that I have seen or learned is that this country truly is not taking care of the people,” Cottrell said. “Many many are veterans or physical/mentally handicapped. It is beyond sad.”

The Toledo effort has spawned a new outreach effort in Defiance where the homeless there live under a viaduct. Kaley Smith will be organizing a run in the fall in Napoleon and Wurns group will help her.

So after coming home and putting everything away, Wurns woke up the next morning and learned her pole barn had been broken into and many items including a generator had been stolen. The crime left her feeling violated, but not demoralized.

“We can never have too much help,” Cottrell said. “We do year-round collections of $5 McDonald gift cards.”

The cards will feed a homeless person for five days, she said. The group will either pick up the cards or they can be mailed to the Swanton American Legion.

Be the first to comment on "Wauseon Woman, Swanton American Legion Team Up To Help Toledo’s Homeless"