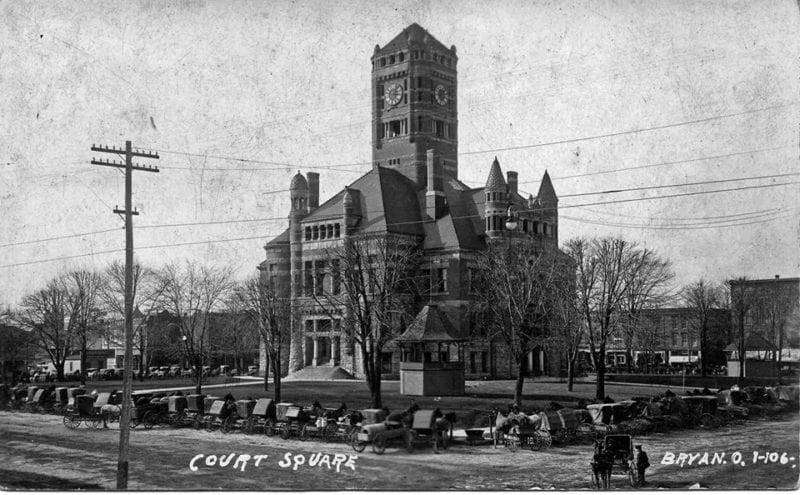 (March 30, 1935, 83 years ago): The bandstand in the southeast corner of the Williams County courthouse park in Bryan was razed.

The new bandstand, built by Mort Stauffer, was completed by mid-August and first used by the Bryan City Band that month. According to local historian Richard L. Cooley, “Court park now had two bandstands on opposite corners. Why? During band performances, businesses near the corners which did not contain a bandstand lost business. As a remedy, it was decided to build a bandstand in an opposite corner of court park so the band could play in that stand every other Saturday. Thus, the businesses nearest that bandstand could profit from the crowds at that location.” In 1935, an octagonal concrete bandstand was constructed in the southwest corner of the courthouse yard and the 1902 bandstand was razed.

The 1898 bandstand in the northeast corner of the courtyard was razed in 1954. Both wooden frame bandstands are visible in this circa 1905 photograph, taken looking northwest toward the courthouse. This vintage image is from the Kevin Maynard collection–Courtesy of the Williams County, Ohio, Local History Exchange.

Be the first to comment on "(1935) – Williams County Courthouse Bandstand Razed (Bryan, Ohio)"