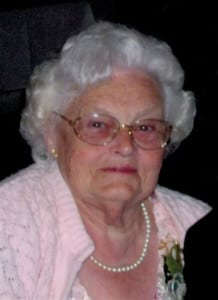 Alice F. Elton, age 88, of Delta, passed away early Sunday morning, November 17, 2013, at Swanton Health Care. She was born in Maumee on December 1, 1924, to the late Omer Favorite and Regina (Wales) Favorite. Alice was a secretary for Attorneys Merlyn D. Beard and Terry J. Kaper for 49 years, retiring March 29, 1990. Alice enjoyed the outdoors, gardening and especially spending time with her grandchildren. In addition to her parents, she was preceded in death by her husband of then 66 years, Herbert Elton, and brothers, Howard and Jerry Paul Favorite and sisters, Joan Tedrow and Ruth Richter. She is survived by her children, Edward (Gail) Elton of Delta, Susan (Doug) Bateson of Delta and Thomas (Gail) Elton of Swanton; brother, Larry (Connie) Favorite of Lake Hamilton, FL; grandchildren, Michael (Michelle) Elton, Jody (Said) Rukieh, John (Kimi) Elton, Kristy (Adam) Gardner, Tige (Shannon) Bateson, Craig (Nicole) Elton and Scott (Sarah) Elton and great grandchildren, Mazin, Anna, Blake, Lyla, Nathan, Reed, Liam, Payton, Paige, Hunter, T.J. and one on the way. In honoring Alice’s wishes, there will be no public visitation or service. Private interment will be at Greenlawn Cemetery in Delta with Pastor Alan Weese officiating. Those wishing an expression of sympathy are asked to consider contributions to the American Legion Auxiliary Post 373, 5939 State Route 109, Delta, OH 43515. Arrangements were entrusted to Barnes Funeral Chapel, 5825 St Hwy 109 in Delta. “Those we love don’t go away. They walk beside us every day. Unseen, unheard but always near, still loved, missed and very dear. God knew that you were in pain; He knew that you would never get well on earth again. He saw the road was getting rough and hills were hard to climb, so He closed your weary eyelids and whispered, “Peace be Thine”. Our hearts still ache in sadness, and secret tears still flow, what it meant to lose you, no one will ever know. Our family chain is broken, and nothing seems the same, but as God calls us one by one, the chain will link again.” Online condolences may be sent to the family through our website at www.barnesfuneralchapel.com