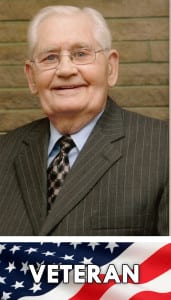 Archie D. Fielitz, age 91, of Archbold, passed away Saturday, November 16, 2013 at Fairlawn Haven Nursing Home in Archbold. Archie was self-employed as a cabinet maker and had started what is now Fielitz Cabinets, in 1954.

Archie was born in Williams County on December 3, 1921, the son of John and Verna (Graber) Fielitz. On February 1, 1944 he married Ruby P. May, and she preceded him in death in 2012. He was a member of the Archbold Evangelical Church where he had served as a trustee and on various building committees. He also served on the Board of Directors for Fairlawn Haven and had been a member of Archbold Village Council. Archie was also an Army Veteran of WWII.

Visitation will be held from 1:00 P.M. until 7:00 P.M. on Thursday, November 22, 2013 in the Chapel at Fairlawn Haven. Funeral services will be private at the Archbold Evangelical Church and burial will be in the Archbold Cemetery. In lieu of flowers, the family requests that memorial contributions be given to Miracle Camp or the Archbold Evangelical Church Capital Fund. Online condolences may be offered to the family at www.grisierfh.com. Grisier Funeral Home in Archbold has been entrusted with arrangements.