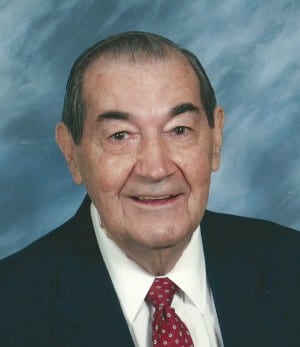 Alois E. “Louis” Van Poppel, 86 years, of Bryan, passed away Friday, January 29, 2016 at Parkview Regional Medical Center, Fort Wayne, Indiana. Louis was born July 16, 1929 in South Bend, Indiana, the son of the late August and Helena Marie “Lena” (VanDeBussche) Van Poppel. Louis graduated from Bryan High School in 1948 and then attended Southern Mississippi University on a Football Scholarship. He was an Auctioneer and Realtor. Louis was a member of St. Patrick Catholic Church.

A Memorial Mass for Louie will be held at 10:30 a.m. Friday, February 5, 2016 at St. Patrick Catholic Church with Father Jim Halleron officiating. He will be interred in Fountain Grove Cemetery, Bryan.

Those planning an expression of sympathy are asked to consider memorial donations be given to St. Patrick Catholic Church.