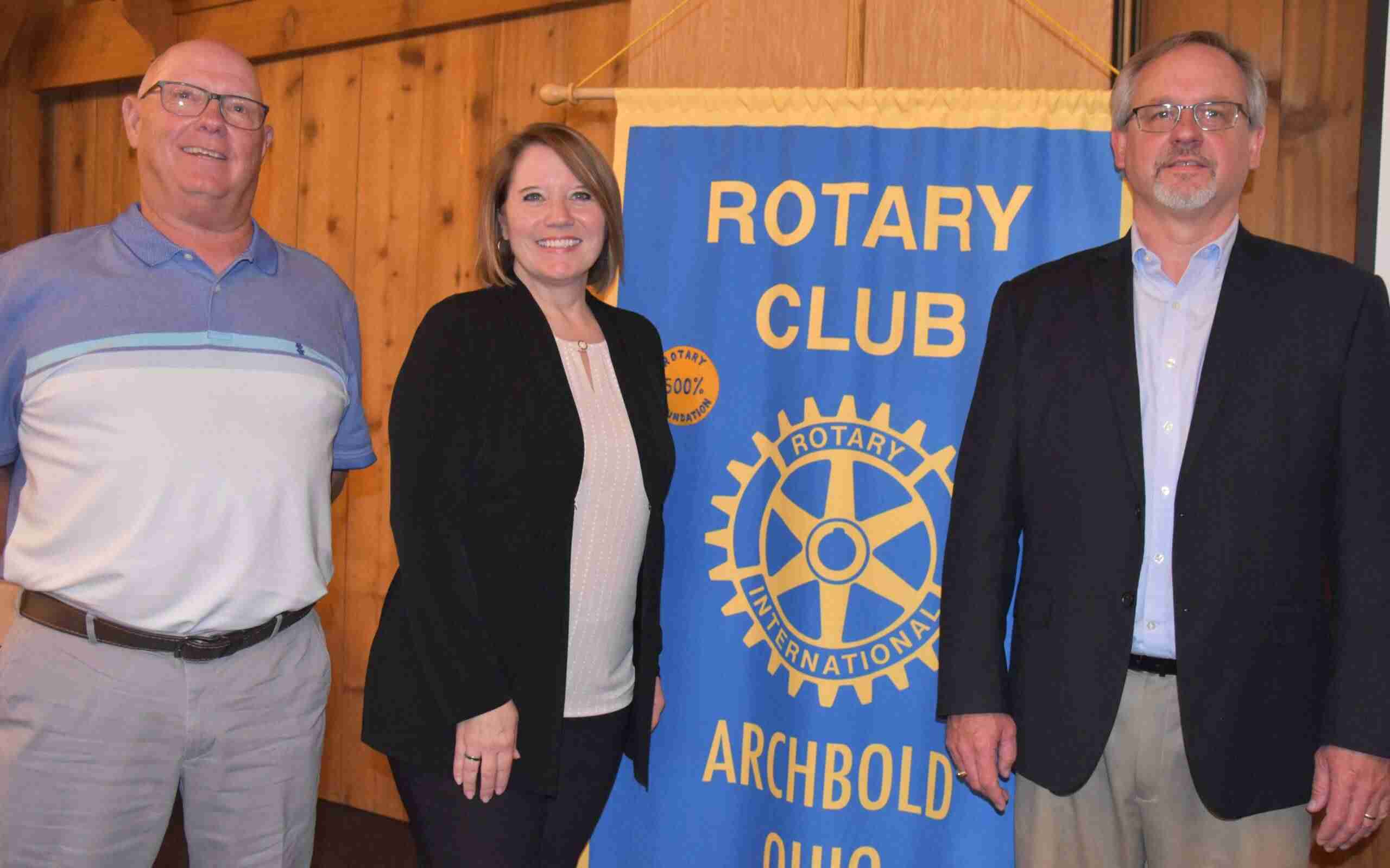 Artist David Rickerd will begin painting the mural depicting Archbold’s history on Tuesday, June 1 and complete the project on the south side of the former Rupp Furniture Store downtown within four to six weeks.

Members of the committee have spent the last 12 months working with the artist to make sure a variety of details from the village’s past are depicted in the mural.

From left, Mayor Brad Grime, council member and Rotarian Karla Ball and former mayor and Rotarian Jim Wyse updated Rotarians on the process and provided a peek at what the final mural will look like at the May 26th Rotary meeting.

Mayor Grime explained the project actually started about five years ago when the village purchased the former Rexall Drug Store and had it razed to provide more room for semi-trucks to turn the corner of State Route 2 in downtown Archbold.

It was decided that the wall of Rupp Furniture could be turned into a mural, but the artist who was originally planning to do the work retired. Last June, the village engaged Rickerd from southwestern Ohio to create a “printer’s tray design” of 45 or so historical things from Archbold’s past.

Wyse explained that the committee provided the arftist with about 50 ideas that they felt should somehow be represented in the mural and provided photos that the artist could use to create the work.

Starting with the first settler, George Ditto, to businesses and industries, churches, organizations and people as well as stories that have been part of Archbold’s past, Rickerd has created a mural that he will begin painting Tuesday, June 1 and hopefully finish before the July 4th holiday, but it all depends on the weather as he’ll be working during daylight hours on what will be his largest outdoor mural.

Wyse explained that the mural will likely draw people from the area to Archbold — both to watch while it is being painted and to view it once it’s completed.

Committee members noted that a lot of “hidden” things will be in the mural and regardless of how carefully people look at it, they will likely notice something they hadn’t seen before when they look at it a second, third or fourth time.

To help explain how each item in the mural represents a important part of Archbold’s history, pamphlets will be designed and available that tell the back story of each image and those with smart phones can scan a code at the mural to learn more as well.

The total cost of the mural is $68,000 with more than $19,000 of that amount left-over from the village’s sesquicentennial celebration and another $10,000 in grants from the Ohio Art Council and the Black Swamp Art Council with private donations making up the balance.

Rickerd has recently completed two other smaller murals on buildings in Napoleon and Grand Rapids.