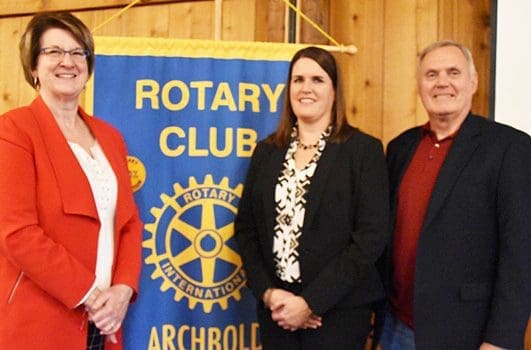 DEVELOPMENT PROGRAM … Wauseon elementary educators Lisa Williams (left) and April Beck told Rotarians about an innovative program that they have developed to help kindergarteners in the Wauseon school system who have tested in the lowest ability levels from falling even farther behind as they begin school.  The program is based on research that says that early life (pre-birth to age 3) is a critical development time for children.  If they fall behind developmentally during this time period, then they will never be able to catch up with their peers after age 4.  They explained that the solution to getting these children on track is intensive instruction as soon as possible that also involves the children’s parents or care-givers.  They explained how they raised $50,000 over the summer to pay for long-term subs to cover their regular teaching responsibilities to allow them focus on implementing It All Matters for 12 kindergarten students and their families during the current school year.  Bob Aschliman arranged the program.

Two elementary teachers from the Wauseon school system told Archbold Rotarians about a program that they have developed called “It All Matters” that is designed to help the most developmentally challenged children learn the basic skills that they will need to keep up with their peers as they move through school.

What Lisa Williams and April Beck shared sounded simple enough, but implementing it is far from simple.

It requires an entirely new approach to working with the most “at risk” children and their families as they begin school.

It’s an approach that traditional classrooms with one teacher and 20 or more students can’t provide.

It requires one on one attention to each student and then working with and teaching the child’s parent or parents what they need to do and how to do it or face the likelihood that their child will fall farther behind and never catch up with classmates.

Failing that, she cited research that suggests these children will never be able to catch up.

Both women, who are employed by the Wauseon school system, feel so strongly about this that they raised $50,000 in donations and grants over the summer so the district could hire substitutes for the current school year for them so they could focus entirely on the kindergarten students who tested lowest in the Wauseon schools and their families.

For one hour each Monday through Thursday, the family support educators work one on one with the students and on Friday they work one hour with a parent of each student — focusing on what they need to do at home so their child can begin to learn the skills that form the basis of future learning.

Their focus is on basic education and developmental skills, including language and fine motor skills.

Even before children learn how to read, speak and do things that are taught in kindergarten, they need to see and hear those things being done.

Both women emphasized that from birth to age 3 parents and adults who care about the children need to hold them, read to them, talk to them, sing to them and play with them on a daily basis.

There is no substitute for the personal contact, the emotional connections that are formed and modeled for the child.

Television, videos and so forth are not an acceptable substitute, they said.

Several months into the program, they reported that they can begin to see some progress with most of the kindergarteners that they are working with, but it’s slow.

They are following a research-based curriculum — both with the children and the families.

They hope to continue the program for the 2023-24 school year, but need to continue to get donations for at least another year until they have more data that shows how it makes a difference before asking the school district to hire additional staff so the program can be implemented on an on-going basis.