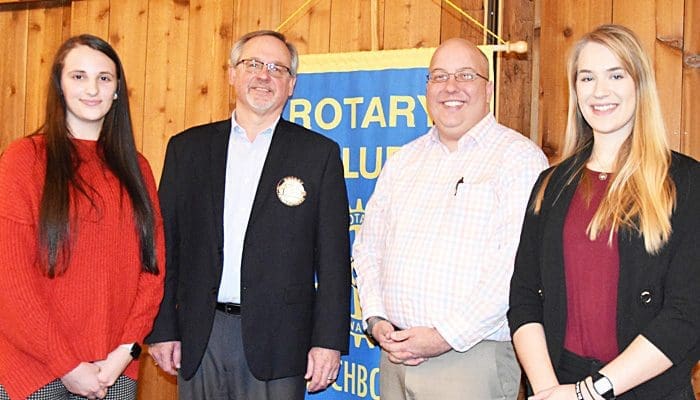 The Fulton County and Archbold economic development offices are teaming up on the “Welcome Back Home” initiative to build a database of roughly 5,000 Fulton County graduates to help county businesses identify and recruit local talent who are now working outside the county or even the state to come back home and work for Fulton County employers.

Matt Gilroy, executive director of the Fulton County Economic Development office, and Jim Wyse, director of Archbold’s Economic Development office, explained to Archbold Rotarians how the initiative’s database was built and how area businesses can use it to recruit all types of employees — particularly for those positions that may be difficult to fill.

Each year, an additional class is added as graduates have completed college or have established themselves in a career.

The Fulton County office has used social media such as Facebook and Linked-In to identify nearly 5,000 graduates of the estimated 12,500 who live outside of Fulton County.

As local businesses tell them about positions that need to be filled, the offices can go through the database to look for possible matches to share with employers.

Former Archbold Mayor Jim Wyse explained that in the short time that he’s been in his current position with the village that he has worked with others to develop an organized plan to reach out to Archbold and other Fulton County grads to market the range of jobs and quality of life that Archbold and Fulton County can offer those who might like to return home to work.

One of the recommendations that he was given early on was to develop a video to send to graduates.

He explained that an email is easy to forget — especially if someone isn’t looking for a job right then.

However, a short, professionally done video that features graduates who have either stayed in Fulton County to work or who have returned after working somewhere else makes a bigger impact and is a lot easier to remember.

In fact, part of his presentation for Rotary was showing the video that has been created with the support of the Archbold Community Improvement Corporation board.

The video featured 15 persons who either worked for a large employer (Sauder Woodworking), small employer (Andres, O’Neil and Lowe), a community employer (the Archbold fire department) or Archbold Area Schools.

The persons explain what they like about living and working in the Archbold area, and for those who had moved back after living somewhere else — why they made the decision to return.

Both Gilroy and Wyse explained that the database and video are just a starting point.

For example, both noted that Rotary and other community organizations often offer college scholarships to graduating seniors.

Perhaps a spin on that would be for communities to offer returning graduates a package that helped them pay off a portion of their college loan for agreeing to come back and work where they grew up.