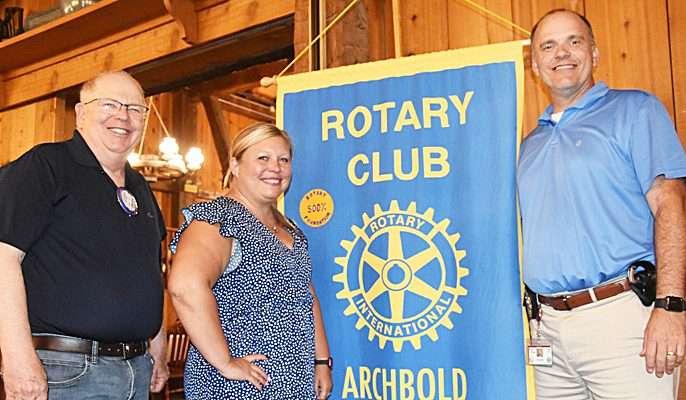 Shane Chamberlin, the Chief Probation Officer for Fulton County’s Common Pleas Court, told Rotarians about his job, noting that a lot of his time is spent monitoring the drug testing of the clients who are assigned probation as a part of their sentencing.

It’s not necessarily the part of the job that he enjoys the most; however, it does take quite a bit of his time. Instead, he prefers to describe his job as that of “a broker of services.”

In other words, he works with clients who are assigned to him during their probation — learning the types of services that they will need to successfully complete probation and stay out of trouble.

He then helps his clients connect with agencies and resources that fit their needs. He stressed that he is not a counselor or a financial adviser, but if that’s what is needed, then he tries to suggest places where they can go to get that help.

Another role of probation officers is to help the court — specifically the judge — understand how likely it is that an offender will successfully change their ways.

The officer researches the offender to develop a pre-sentencing investigation report that the judge uses as a guide for sentencing.

Chamberlin has worked nearly 24 years as a Fulton County probation officer — his first and only job since graduating from Defiance College.

His first judge was James Barber and his current judge is Jeff Robinson. He will soon be working with his third judge: Scott Haselman.

One of the things that he said is used much more today than when he started is random drug testing. In the early days, he said, probation officers would determine which clients that they felt would mostly likely need drug testing. Today, everyone undergoes drug testing as a part of probation and it’s random.

Usually, it’s a urine sample that can detect about 14 different substances for up to five or seven days from use. Alcohol use has a much shorter testing period for detection and isn’t always spotted.

He also noted that while many probation visits require the person to come to the probation officer. They will do in-home visits as well, but generally try to avoid workplace visits.

Both Chamberlin and Burkholder praised local employers who are willing to hire convicted felons because getting and holding a job is often an important part of their probation.

Burkholder has been Fulton County’s Drug Court Coordinator for nearly five years. The goal of drug court is to identify persons who have violated a substance use law who are likely to successfully complete an intensive treatment program instead of serve jail time.

As the coordinator, she brings together the various agencies and resources that will work with the offender on a path to recovery. The team meets regularly and reports to each other and the judge about the person’s progress.

Periodically, the team and the judge meet to review each participant’s progress and prior to their meeting with the judge and participant.

In response to a question, Chamberlin said only about 10 percent of the persons he works with in probation return to the court for a similar offense.