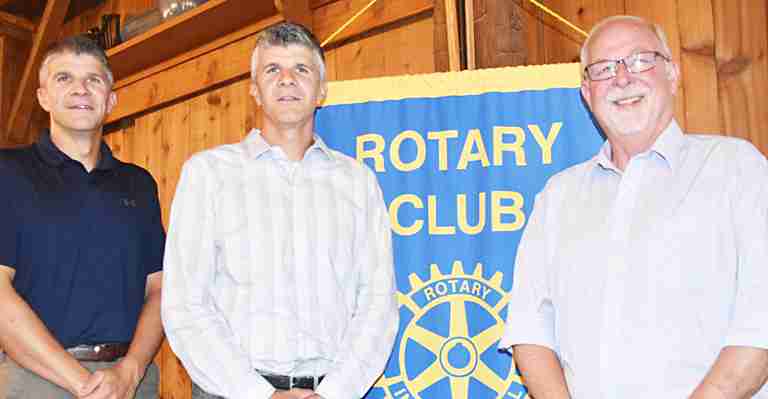 WHAT IT TAKES TO BE AN OFFICIAL … Friday Night Lights has held a special meaning for Derek Krueger (center) and his Rotarian brother Dexter (left) as they have worn the striped shirt of high school football officials together, including play-off games.  Derek explained what it takes to become an official and qualify to officiate play-off and state championship games.  The program was arranged by Luther Gautsche.

Ever wonder why football officials wear striped shirts?  And, were they always black and white stripes? Derek Krueger, who has officiated Ohio football games since he graduated from Archbold High School some 24 years ago, shared the answers to those questions as well as explained how he became an official to Archbold Rotarians.

He explained what it takes to establish and maintain his reputation as a high school football officials, so that doesn’t only mean that his Friday nights every fall since about 2001 have been spent on the football field, but that reputation has also earned him the opportunity to officiate play-off and state championship games.

Initially, he had to complete an in-person class to learn and apply the rules of football, learn the mechanics of being a football official (where to stand for each of the six officiating positions on the field and how to signal penalties) and then use that knowledge to determine the correct call in various cases.

After completing the class, which is now taken on-line, budding officials have to pass a test. Those who pass the test become Class 2 officials who can officiate junior varsity and lower football games for two years.

After that, they can become a Class 1 official for varsity football games as well. To qualify to officiate high school play-off games, only the highest ranked officials can be assigned.

Typically, Class 1 officials work as a crew for the entire season and are assigned games as a crew in their region. Derek explained that he decided to step away from officiating Friday games since he now has a son who is playing high school football and wants to be able to watch his games.

Part of the reason is that a number of older officials just dropped out due to COVID concerns. Others were tired of the harassment that they received.

Consequently, he said that he expects there will be more varsity football games played on Thursday nights and Saturdays this fall since there just aren’t enough officiating crews to cover all of the games on Friday night.

He explained that you have to really enjoy being an official to spend the time that’s required to do a good job – to know the rules forward and backward, watch game tapes to critique how you and your crew officiated the last game, and spend the 7 to 10 hours every Friday in the fall getting to and from a game

With varsity games paying about $75 per official, it certainly isn’t for the money, he said. So, back to the original questions.

In the early days of football, officials wore white uniforms — not much different from some of the teams.  Consequently, quarterbacks mistakenly threw passes to officials that they thought were their receivers. As a result, striped shirts became standard for officials.

However, initially, the color of the stripe was dependent on which spot on the field the official was responsible for watching.  So, a crew of five officials would have five different colored stripes.

It wasn’t until the 1970s when black and white stripes became standard for all football officials (NFL, college and high school).