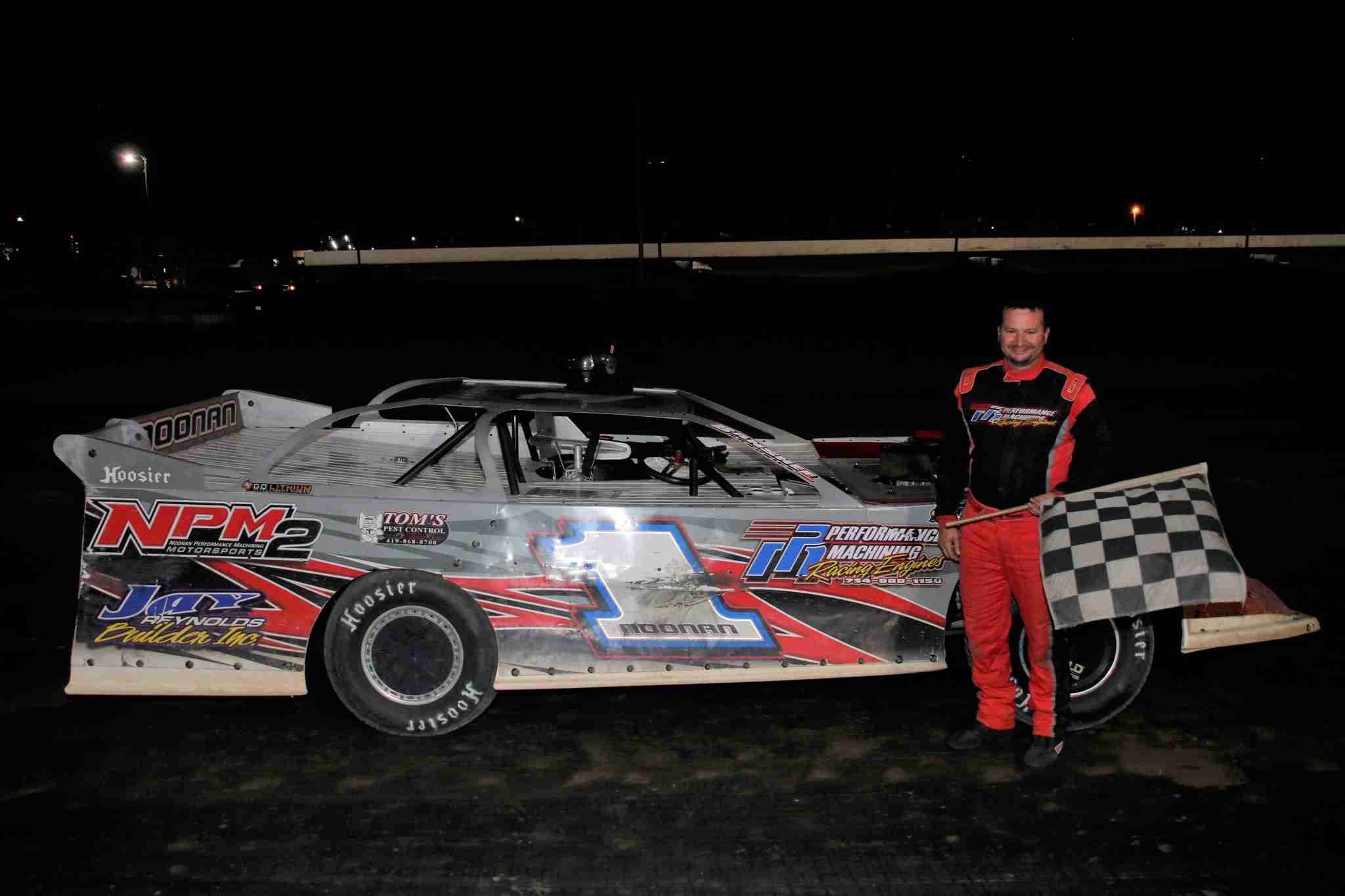 WAUSEON, OH – The 2022 points season wrapped up on Saturday night at Oakshade Raceway with season champions being unofficially determined by some very tight margins, including one battle ending in a tie.

Shiels, the defending track champion, started on the pole and led all but one lap in the 25-lap Late Model feature event. Shiels caught the tail end of the field during a long green flag run and had a hard time putting a few of those cars a lap down.

That allowed Rusty Schlenk and Colin Shipley to close in. Schlenk and Shiels split by one lapped car three-wide down the backstretch with Schlenk looking high and Shiels going low.

Schlenk had the advantage at the line to lead lap 20 by a nose. The Britton, Michigan, driver fought back and reclaimed the lead the following lap and held on to win his third Oakshade feature win of the season.

The win capped off another Oakshade/Attica Late Model Challenge Series championship for Shiels, but it wasn’t enough for the Oakshade track championship.

Carter Murday entered Season Championship Night with a slim point lead over Josh Robertson in the Oakshade Sportsman class. Robertson, out of Defiance, Ohio, started on the pole of the 20-lap feature event and led from flag to flag with Murday trailing in second.

Murday’s second-place finish was just enough to earn his first track championship by just a two-point margin over Robertson. Carter Schlenk, Jesse Jones and Rusty Smith were the rest of the top five feature race finishers.

William “Bubba” Cundick trailed Kolin Schilt by 10 points at the beginning of the night in Dominator Super Stocks points and ended up starting on the pole of the 15-lap A Main feature event.

The Wauseon, Ohio, driver jumped out to a big lead at the start and led the entire distance for his second A Main win of the season. Adam Lantz tried to close in on Cundick but had to settle for a second-place finish.

Adam Noonan ended up third with Schilt finishing fourth, which was enough to earn his first track championship by just four points over Cundick. Justin Gamber rounded out the top five finishers.

In the Compacts, Ryan Okuley had one of the biggest leads entering Season Championship Night with a 36-point advantage over defending champ Eric Carr from Wauseon, Ohio.

Carr started on the pole of the Compact feature event and was leading Okuley. The two drivers were working through lapped traffic and halfway through the race, Okuley attempted to pass a lapped car on the outside down the front stretch.

Carr went on to pick up his fifth A Main win of the season with Jason Deshler, Jason Bailey, Jeff Goodman and Dylan Iffland the rest of the top five finishers.

Okuley was credited with a 13th place finish which unofficially resulted in Carr and Okuley in a tie at the top of the point standings. Carr would have the edge in the tie-breaker which was the number of wins.

Dean Taylor looked to have the car to beat in the Dominator Super Stock B Main. Taylor led the first part of the race, but would have mechanical issues after a lap six restart that would knock him out of the event.

Oregon, Ohio’s Haley Dippman would inherit the lead and held off Charles Stuckey to pick up the win. John Lonabarger started deep in the field and drove to a third-place finish ahead of Jason Drummond and David Ellis.

Brandon Proffitt out of Adrian, Michigan, held off a late charge from James Stamper to win the final race of the night, the Compact B Main. Aaron Barrick finished third followed by Mike Siegel and Todd Drewes Jr.

Even though the point championships have been unofficially decided, racing still continues every Saturday night through the end of September at Oakshade Raceway.

This Saturday will be full racing program of DIRTcar UMP Late Models, Sportsman, Dominator Super Stocks and Compacts. Gates open at 4pm with hot laps and qualifying at 6pm and racing at 7:15pm.