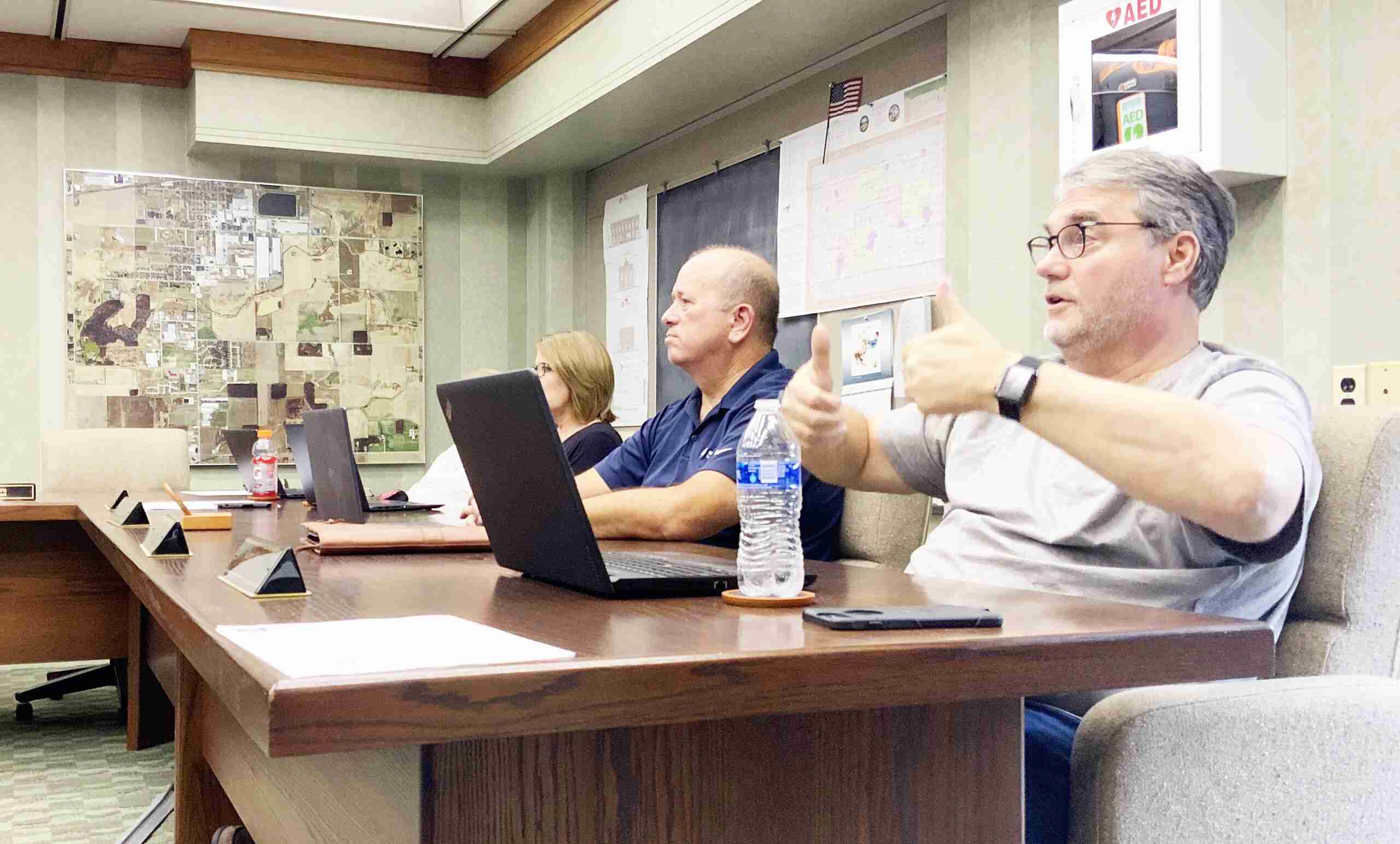 DISCUSSION … Council members update Kevin Morton on the current situation with the possible change of right turn on red at Stryker St. and SR 66, which is still to be determined pending results of the traffic flow when school starts back up. (PHOTO BY LINDSAY PHILLIPS, STAFF)

Archbold Village Council began their meeting on August 1 at 5:30 p.m. in the Council Chambers. The meeting was called to order by Mayor Brad Grime followed by a roll call of all remembers. All members were present, including Chad Kern who was there through a phone call.

Minutes from the previous meeting on July 18 were approved along with bills and payroll with a unanimous vote in the amount of $524,781.46.

Hearing no comments from public participation, the board moved to suspend and approve Resolution 2022-46, Accepting the Change Order #5 for the Water Treatment Plant GAC Project Improvements and declaring an emergency.

Resolution 2022-47 was also approved, Authorizing the village administrator and finance director to advertise for bids for the Sanitary Sewer Lining of the Northwest Section of Archbold Contract 2-2022 and declaring an emergency.

A third and final reading of Ordinance 2022-43 was read Amending Chapter 91.21(B) of the Codified Ordinances of the Village of Archbold, Ohio regarding the discharge, ignition, or explosion of fireworks within the village.

Another third and final reading was read for Resolution 2022-23. The resolution reads, approving two temporary closures of SR66/N. Defiance Street for community events. A vote was held and only two out of six council members chose to vote yes.

During the meeting reports, Mayor Grime introduced Scott Dominique as the newly promoted Assistant Superintendent. Mayor Grime stated, “Congratulations on getting that class two, we appreciate all the work you guys do out there.”

Dettling shared, “We planned the roof to be re-done in April, they finally came today and started, it’ll take them a couple weeks to get that wrapped up and then a few more weeks after to finalize some stuff and then HVAC will start.”

Council member, Brad Short asked about how the water tower was coming along to which Mrs. Dettling replied, “They’re doing some final grading and a little bit of concrete work around it.”

The startup date for the water tower is still to be determined.

Also, during comments from council, Kevin Eicher welcomed back member Kevin Morton and shared, “I just want to say I’m glad to see Kevin back after his surgery. It looks like he’s going well.”

With no other business, the regular council meeting was adjourned at 5:50 p.m., with the council work session beginning at 6:00 p.m.