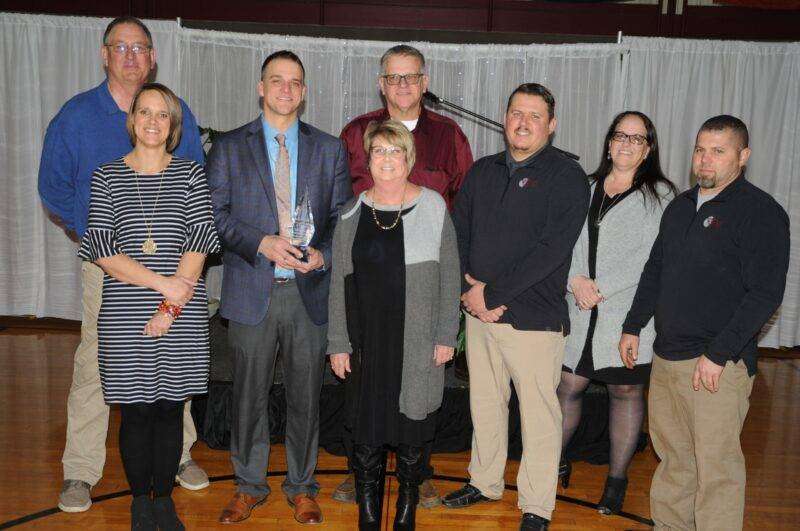 At their 73rd annual banquet on the evening of January 23, the Bryan Area Chamber of Commerce recognized two businesses, one that traces its roots back to 1884, and the other a rapidly growing entity that is making its presence known on the world stage.

Held in the gymnasium of the Williams County Family YMCA in Bryan, the banquet spotlighted these two businesses, Artisan Floral and Gift Boutique, along with Advanced Rehabilitation Technology/S&S Directional Boring.

Introduced by Rod Saunders of the Bryan Theater, Artisan Floral and Gift Boutique of North Union Street in Bryan was named the 2019 Small Business of the Year. The business traces its lineage back to 1884…the days when Chester Arthur was President of the United States. Most recently, the business enjoyed a long run as the Wonsetler Flower Shop on North Walnut Street.

Darlene Phillips purchased the business almost 35 years ago, and being renamed later the Artisan Floral and Gift Boutique, the business was relocated to the historic Hub/Sinclair building at the northeast corner of Union and High Streets, one of the busiest intersections in town. That facility marked its 70th year of Bryan business on January 13 of this year.

When you present Bryan City Council a proposal for a building project totaling $2,232,945 for the erection of a 320 by 150 foot facility in the Bryan Industrial and Commercial Complex at 525 Winzeler Drive, it is an understatement to say that you are going to attract attention.

While Schlachter Investments LLC did indeed do just that, their family of businesses, S & S Directional Boring Ltd., Advanced Rehabilitation Technology Ltd. (ART), and OBIC LLC have been at the top of the speed dial list for those who want to save their subterranean infrastructure, without having to go to the huge expense of digging it all up and replacing it.

“This business was founded in 2007 as an offshoot of the then eight year old S&S Directional Boring Company, by the Schlacter family,” said incoming Bryan Area Chamber of Commerce President, Bob Golding.

In describing the services of Advanced Rehabilitation Technologies, Golding said, “What they do is they provide rehabilitation services to pipes and vats and containers is the best way I can explain it. I’ve seen what they do, and essentially it’s putting a lining with polyurea or polyurethane coatings into a maybe leaking or maybe decaying pipe, a sewer pipe, a water pipe or something, which is really interesting technology in the sense it’s relatively new, but it is their baby in this industry.”

“And the sealing technology provides a cost effective way to keep using your existing infrastructure, while avoiding environmental damage from leaks, because depending on what’s in this pipe, it could be sewage, it could be industrial chemicals, it can be anything….and this is a way to keep it from leaking into the environment, and with minimal disruption because this is done inside the pipe or the vessel itself. They provide their services currently in Ohio, Michigan, Indiana, Pennsylvania, Maryland, New York, New Jersey, Delaware, West Virginia and Virginia from the location here in Bryan…as well as a satellite office in LaVale, Maryland.”

Receiving the award on behalf of the company was Dustin Schlacter, Corporate Partner and son of Founder Tod Schlacter. “As Bob eloquently explained, our business is a little bit different than most,” Dustin said, “…and I like to say it’s not very sexy to talk about sewers. We’re in the business to fix things. We fix stuff that our grandfathers installed in the Great Depression and before.”
“Everything we do is grouped into this trenchless technology field.”

“The core of our business is rehabilitation of underground infrastructure. And that doesn’t really matter to most until your toilet doesn’t flush and water doesn’t come into your house. Until recently, we’ve been a well kept secret. Since 1999 Tod, my dad, and myself have been in business growing S&S Directional Boring to a leader in the tri-state area for directional drilling. In 2007, we diversified with Advanced Rehabilitation, better known as ART.”

“Recently,” Schlacter continued, “…we developed a company called OBIC Products.” OBIC was another branch of the infrastructure coatings side of the organization, but by the end of the year, it will be expanding beyond state and national boundaries, “…to help fix the world’s underground water and sewer problems. Because of global outreach, it will be in five or more countries before the end of 2020.”

“From these humble beginnings, we’ve always had a big vision of what is possible. As business people, we need to continue to look for new opportunities in the world around us.”
“I need to give thanks,” Schlacter said. “Thanks to God for the gifts and talents that he’s given us, without some of these corrections and guidance along the way, we would not be here still today. He’s opened doors for us that we could never imagine, and provided the ability for us to do what we do.”

“He’s given me a vision for the Kingdom where the real work needs to be done…the work of growing mentors and leaders for next generation. Thanks to the community that supports us. Being voted as the Large Business of the Year doesn’t seem fitting for guys like us. We took a chance to build Bryan because we are committed to this community.”

“Tod and I both born and raised here and we believe in this community. We believe in the good values and the hard work that comes from Northwest Ohio. Our goal is to continue to grow and give back to the community. I think that as business leaders, that our job is to support each other in this room for generations to come.”

“I do have a challenge for each person in this room this week, is to go out and tell your family or those who supported you…thanks. There’s somebody that believed in all of you, well before you knew the impossible was possible. So let them know that you appreciate it.”

“Thanks to our team. Our team has stood by us through the ups and downs. For those that are here, and those that are not able to make it…this is all possible because of you. Without all the really smart people here, we couldn’t make those ideas happen. The ideas that he has would never see the light of the day. You all are the reason for today, and I appreciate the hard work and your dedication.” 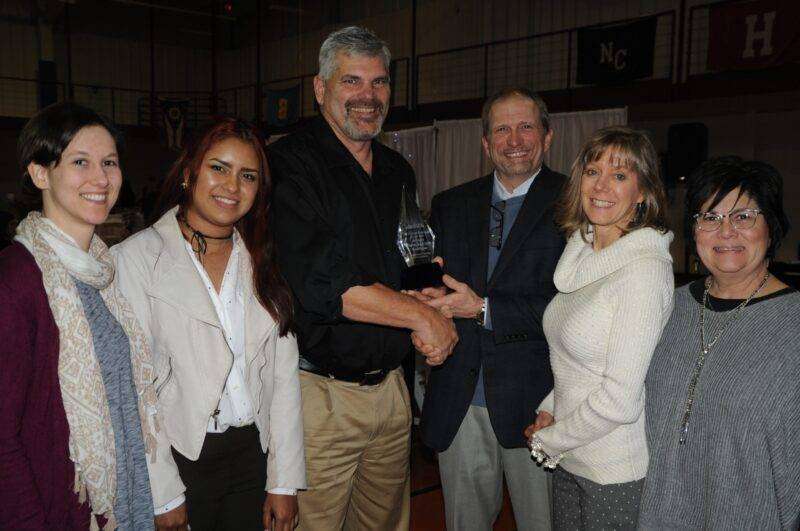 SMALL BUSINESS OF THE YEAR … Artisan Floral and Gift Boutique, who traces its business lineage 136 years, was named the Small Business of the Year by the Bryan Area Chamber of Commerce on January 23. Receiving the award were Claire Graber, Yadsury Phipps, the presenter Rod Saunders, Denny Phillips, Darlene Phillips and Gayla Chaffee. (PHOTO BY TIMOTHY KAYS, STAFF)

“So friends, Schlacter concluded, “…we’re all in this together. Do not lose sight of how great this community is, and the opportunities around each of us. Get involved, and let’s charge forward into the new decade, and set up those yet to come for greater success than we had.”

After receiving the gavel from outgoing President, Rick Thormeier, President Golding challenged the audience on several points and several areas.

“As you know,” Golding said, “…the Chamber took a strong, unpopular position on the proposed county charter government. I give a lot of credit to Rick, because Rick and I caught the heat for that one all over social media. We had horns and tails…and we were right. It was bad for business. It wasn’t going to work; it was bad for the community. A lot of people were misled by outside agitators. It sounds like national politics, almost. But knowing that, we’re going to be more political we need to be, if it’s in the interest of our community.”

“Honestly it’s what started right now with the current DOR (Designated Outdoor Refreshment Area) process,” Golding continued. Defiance and Napoleon have had DOR issues; we have to have one, or we are going to be the least desirable town to recruit young professionals. For those of you that are not clear at the DOR concept, I’ll explain it very quickly.”

“Under Ohio law in the last five years, cities can allow relaxed open container laws in the ‘Entertainment District’, so citizens can attend outdoor events and walk between establishments with an open container of alcohol in a designated area. Napoleon and Defiance have done this with great success.”

“Frankly, we’ve fallen behind them on this issue. So the Chamber, with universal strong support from the hospitality industry, we got the finances planned. We consulted with them, and we adapted it to be a slightly smaller area than Defiance, but close. And close in a sense that it would have room to grow and add a number of new businesses of whatever model that needed to be in it.”

“As far as I’m concerned, the faster this issue is presented to Council, has some public input and enacted, the better. This is exactly the sort of area where the Chamber will hold elected officials to a high level of expectation to collaborate quickly and efficiently, and respond to the needs of their citizens and businesses.”

Be the first to comment on "ART/S&S, Artisan Floral & Gift Boutique Named Bryan Chamber Businesses Of The Year"