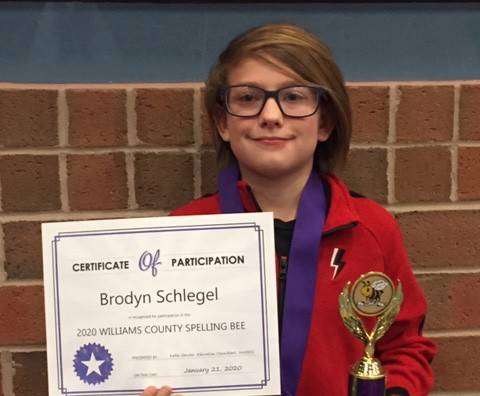 WILLIAMS COUNTY SPELLING BEE RUNNER UP … Broydn Schlegel, from Hilltop Elementary, is an eleven year old sixth grader. (Which also means he has two more years to compete!) He was supported at the spelling bee by his parents Sam and Melissa Ovalle, his two siblings, his great-grandparents, his teacher, Ruth Parrott, his principal, Laurie Worline and the junior high principal, Steve Riley. Concerning this smart young man, Worline stated, “I am extremely proud of Brodyn’s runner-up placement in the bee! My proudest moment that night was when he got a chair for a student from another school when the front row was short a chair. This shows a lot about his character! To have great character and be an awesome speller makes for a homerun!” (PHOTO PROVIDED)