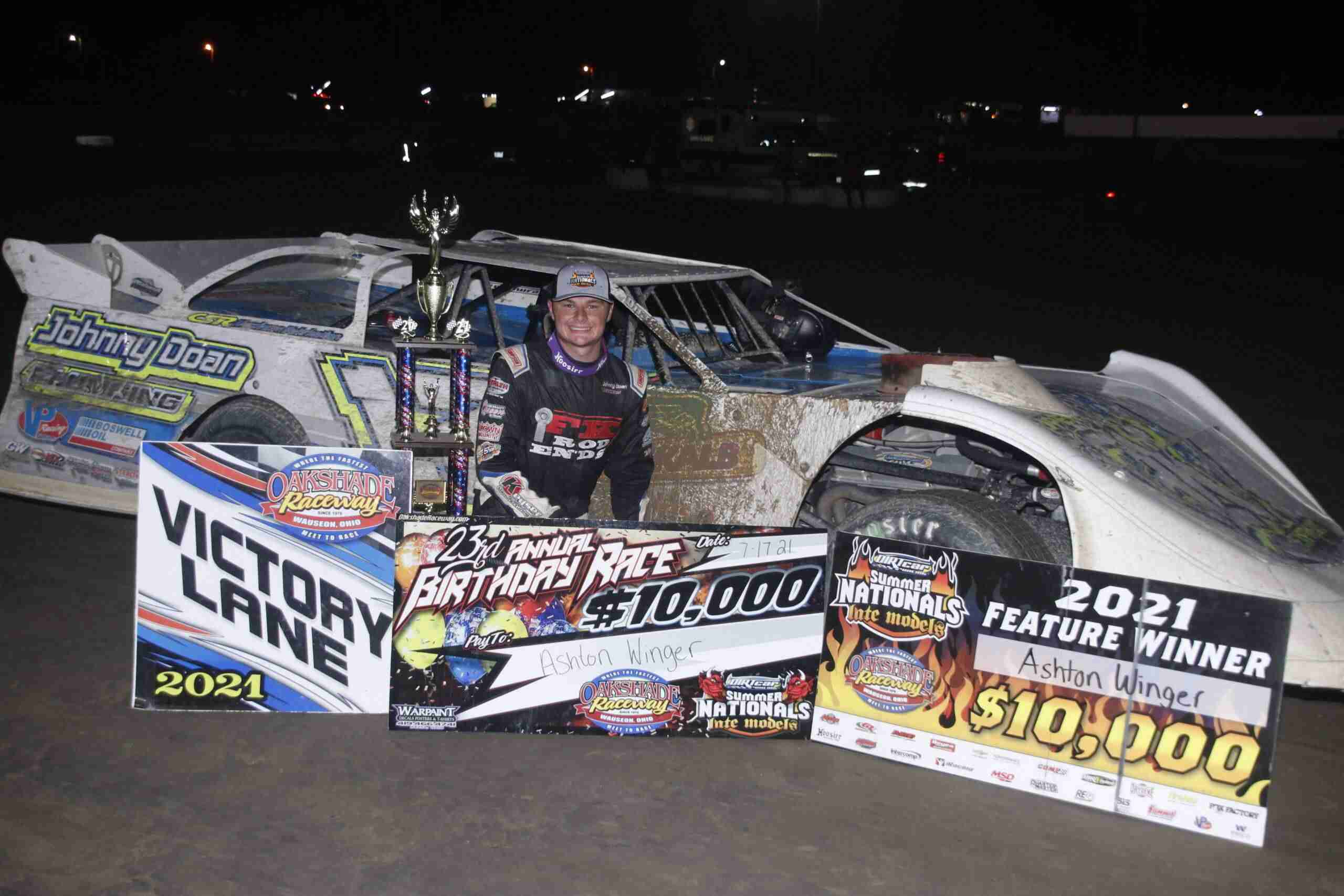 WAUSEON, OH – Persistent rain throughout the week and all day and night before the 23rd Annual Birthday Race left the grounds of Oakshade Raceway a bit soggy, but track crews were determined in working in the racing surface to get the show in.

Fans and race crews packed the house with 53 DIRTcar Summer Nationals Late Models competitors all vying for the $10,000 winner’s check. It was Senoia, Georgia’s Ashton Winger who pocketed the money after earning his second consecutive “Hell Tour” victory.

Dona Marcoullier started on the outside of the front row next to Tanner English and was able to secure the early lead of the 50-lap Birthday Race/DIRTcar Summer Nationals Late Model feature event. A big pile up involving almost half the field brought out the yellow flag just after completing the first lap.

Jeep Van Wormer passed Marcoullier for the lead on a lap nine restart after the second caution of the race. Ashton Winger and Bobby Pierce began to close in on Van Wormer as the leaders approached slower traffic. Winger got by Van Wormer on lap 22 and then started to drive away from the rest of the field.

The defending Birthday Race champion Chris Keller was running in the top five and spun on lap 37 ending his chances of a repeat. One lap later, Marcoullier was running fourth when he spun to bring out another caution flag. Winger was able to pull away from Pierce the final 12 laps for the win.

Sixteen-year-old Hunt Gossum out of Mayfield, Kentucky, started on the outside of the front row of the Summer Racing Equipment Modified Nationals feature and beat polesitter Chad Bauer back to the line to lead lap one.

Gossum opened up a big lead, but a caution with 10 laps to go wiped out his advantage. Gossum pulled away from Curt Spalding after the restart and went on to pick up his second Oakshade Raceway Modified feature win. Dylan Woodling held off Brian Ruhlman to finish third. Chad Bauer fell back to finish fifth.

Oakshade Raceway Bomber point leader Gabe Mueller got out to a big lead early in the Bomber A Main. Only one caution flag flew about halfway through the race which eliminated Mueller’s lead. Stryker Ohio’s Kolin Schilt took advantage and looked to the outside of Mueller after the restart.

He was able to take the lead away and drove to his sixth feature win of the season. Mueller settled for second followed by Jeff Foks Jr., Chane Stuckey and Donnie Ringman.

Donovan Paskan got the early lead in the Bomber B Main. Dan Dippman closed in on Paskan late and looked to the outside for the lead at the white flag, but a spin would bring out the caution and set up a one-lap shootout to the finish.

Paskan, out of Fayette, Ohio, would go on to pick up the victory. Scott Barnhart was able to get by Dippman to finish second. Jeff Wells and Aaron Barrick were the rest of the top five finishers.

The Bomber C Main wrapped up an exciting night of racing with Adrian, Michigan’s Cody Stetten leading the entire distance to pick up his first feature win of the season. Jeff Strock was running second and spun halfway through the race sending him to the tail for the restart.

Dave McMannamy finished second with Strock recovering with a third-place finish. Brian Stutzman and Jeremiah Gilbert were the rest of the top five finishers.

Oakshade Raceway will host the Oakshade/Attica Late Model Challenge series on Saturday July 24. The Sportsman and Compacts will be back in action along with the Bombers. Gates open at 4pm with hot laps at 6pm and racing at 7pm.