Past President of CHWC-Montpelier Hospital Auxiliary were honored and thanked for their years of service during the auxiliary annual luncheon Monday, June 10th at the Thaman Building, Williams County Fairgrounds, Montpelier. Pictured from left to right with the 60th anniversary cake are Betty Eberly, Ruth Smethurst, Deanna Gipe (current president), Pauline Brillhart, Jo Winzeler, and Mary June Trott. Armeda Sawmiller, program committee chairman, presented the 60th anniversary program highlighting the hospital and auxiliary’s history, activities and fund-raising efforts during the past years. Auxiliary scrapbooks and photos were displayed along with the auxiliary’s Vision Awards.

Invocation was led by President Deanna Gipe with the auxiliary prayer. Following the meal, she conducted a short business meeting followed by the anniversary program. Roll call was “Where did you attend your last graduation party and for whom?”.
Special recognition was given to Mary June Trott, retiring auxiliary gift shop manager, who served for many years in that capacity and contributed many volunteer hours. She was presented with a special certificate and a potted peace plant, honoring her service to the auxiliary. Vivian Brown, who has served as assistant gift shop manager, succeeds Mary June as manager.
Deanna introduced Armeda Sawmiller, program committee chairman, who presented a condensed history of the local hospital and auxiliary. From the efforts of the eight northern townships of Williams County, in June of 1952 the Williams County General Hospital opened in Montpelier with 45 patient beds. In that year, 21 ladies from various backgrounds and training combined their efforts and formed the Montpelier Hospital Auxiliary.

Serving as first officers were Babe Howald, president; Mildred Dilworth, vice president; Mary Zeisloft, treasurer; and Alice Tressler, secretary. By 1960 the hospital had admitted a total of 16,000 patients and 2400 babies were born at the facility.
Since that time, the local auxiliary has been active donating funds for many projects at the hospital, distributing visitor cards, volunteering in the auxiliary gift shop and communicating hospital awareness to the public. All past presidents and board members for the auxiliary were then recognized for their service to the community. 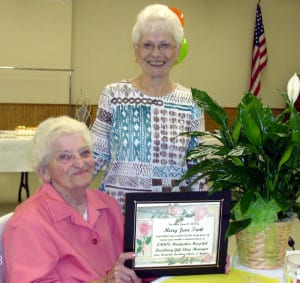 The Montpelier Hospital Auxiliary is the first auxiliary in the state to receive the prestigious Vision Award two times—the first for a fund-raiser during the annual Bean Days celebration and the other for the annual luminary program. When the awards were presented, the local auxiliary was the smallest organized auxiliary in Ohio.

The program concluded with recognition of all the auxiliary members. Armeda used each letter in the word “VOLUNTEER” to signify an attribute for volunteers. Following the program, members were served cake and ice cream and participated in a “fun tax” activity.

The auxiliary does not meet during the summer months but will conduct membership month in September and the next regular meeting will be the second Monday in October. Patient favors during the summer will be taken care of by Janet Bennett-June, Ruth Cooley and Ruth Smethurst-July, and Pauline Brillhart-August. Auxiliary board members will continue to meet on the first Monday of each month.