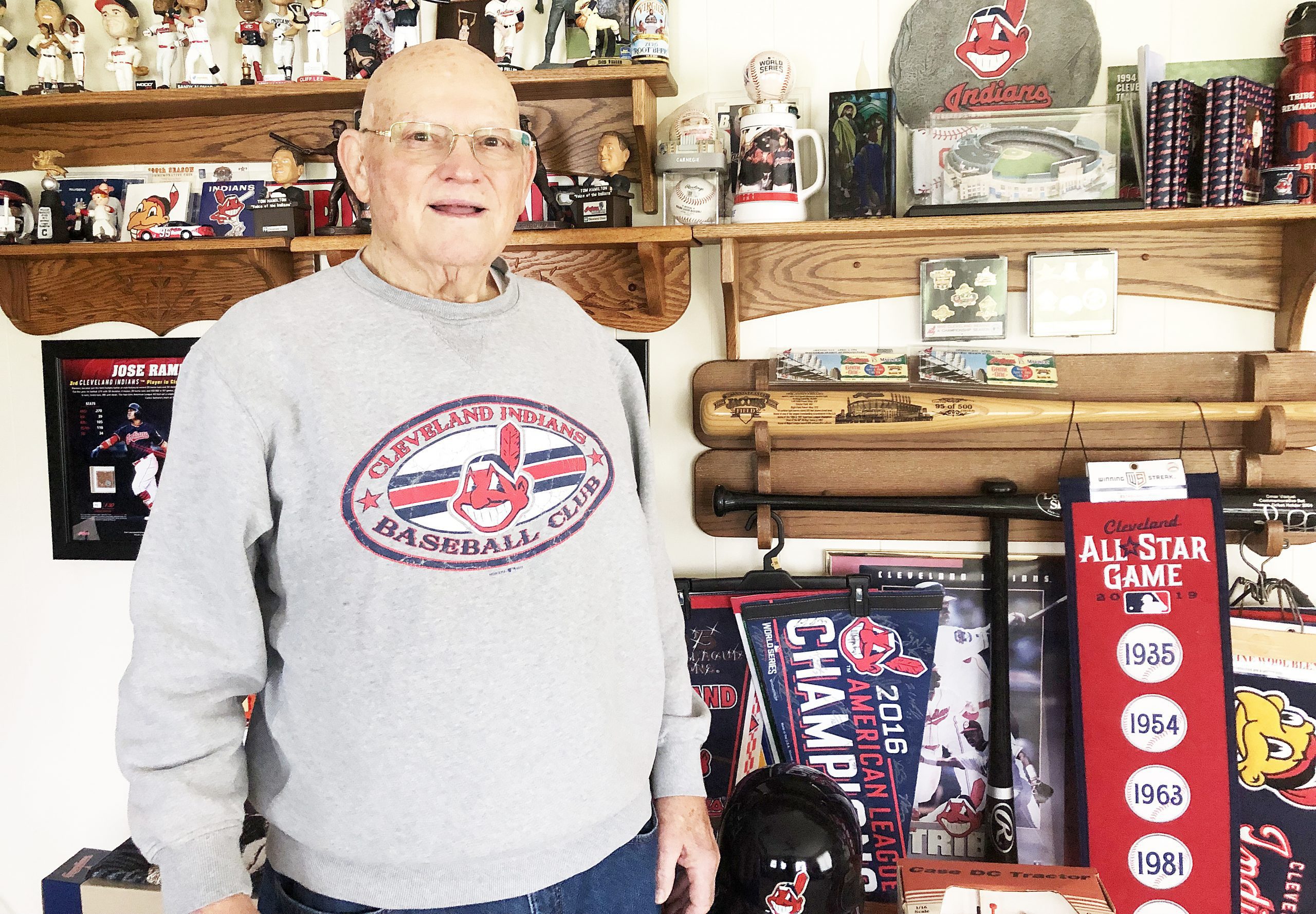 The Cleveland Indians, recently renamed the Guardians, have been a passion of Virgil Fry’s life since he saw his first game at the tender age of eight.

“My Uncle Basil took a car load of us and I have loved them ever since,” Mr. Fry shared, “Of course, they will always be the Indians to me. I refuse to call them by that new name.”

Fry said that no one has given him a hassle about his feelings on the new name. “The V.P. asked me what it would take to get me all outfitted with it and I said I would if he buys my entire collection of Indians things.

“That was the end of the conversation,” he said adding that he was definitely not in favor of the name change.

“I grew up as an Indian fan and I will always be an Indian fan.” He brought out his most recent hat that says 2022 Division Champs with a big red C in the center, pointing out that he was able to add it to his collection because they did not put the new name on it.

Fry has a delightful display of collectibles which he has gathered since he began collecting the Bobbleheads in 1995.

Pens, signed baseballs, caps, jackets, shirts, framed pictures of some of his favorite players, a one-of-a-kind Tiffany style hanging lamp, patches, stickers and a wide variety of other items are neatly organized in a den he calls his man cave.

He lifted the banner of the 2019 All Star Game which lists all the years the Cleveland Indians were in the All-Star Game from 1935 to 2019.

“This was memorable,” he said. “I was thrilled to have been chosen to be one of the hundreds of fans who got to take the big American Flag out on the field.”

“Then I tripped and fell, crushing my shoulder! Had to be taken off the field in one of those little carts.”

“They took me to the hospital and I spent the whole All-Star game day in the emergency room.”

Pretty much everything in his collection room has a story. The joy and contentment which he exudes in that room is delightful to see.

Such order and creativity all together makes it an enjoyable collection to view. Some of his favorite players of whom he spoke were Travis Hafner, Albert Bell as one of his favorite hitters, and Jim Thome.

Fry said that he has never gotten into meeting the players or getting autographs. He just loves watching the games and collecting the items that remind him of all the fun times he has had over the years.

Fry and his wife of 33 years, Marilyn who passed away in 2013, spent many happy days watching the Indians spring training in Winterhaven, Florida from 1993 through 2008.

The team moved their spring training back to Arizona in 2008, ending those years of Florida fun for the Frys, but they kept on going to the home games in Cleveland.

They enjoyed the tradition of staying in the same hotel in Cleveland for thirty years, as they bought the weekend package for home games.

Since his wife passed, Fry has started going for a whole week at a time whenever there is a home game.

He goes for the home series and watches all the practices and attends the games. He has a lot of friends in Cleveland whom he has met during his years of becoming one of the number one fans of the team.

For the past eight years he has attended every single home game and all the ground floor ushers know him by name.

As an adult, he had to adjust over the years to normal life, so he didn’t always get to attend every game.

He farmed for many years after he got married, so with cows that needed milking every day, it definitely kept him home.

He also worked on a few different positions in Ohio Art until he retired after 40 years there, in 2006.

In 1987, he became a season ticket holder and is the only one who goes to every game.

The eighty-three-year-old Fry is also a Cleveland Cavaliers and Cleveland Browns fan, but it is very clear from his talk and his collection that his all-time favorite sport to watch is baseball and his lifelong team is definitely the Cleveland Indians!

Something really special happened in November 2022 when the Cleveland Plain Dealer published an article about Mr. Fry.

He got a personal, hand written letter from Ohio Governor Mike DeWine congratulating him for his many years as a season ticket holder, and chatting with him about their love of baseball.

The letter began, “Dear Virgil, I hope you are enjoying the World Series.” The governor shared how his dad took him to the 1954 World Series in Cleveland when he was seven years old.

After a few post-card sized pages, the letter ended, “Let’s hope for a great season for Cleveland next year.”

“This is an exciting team. I love the way they play…singles…doubles…stolen bases…Next year should be fun! My best, Mike.”

Fry was pleased that the governor took time to write to him.