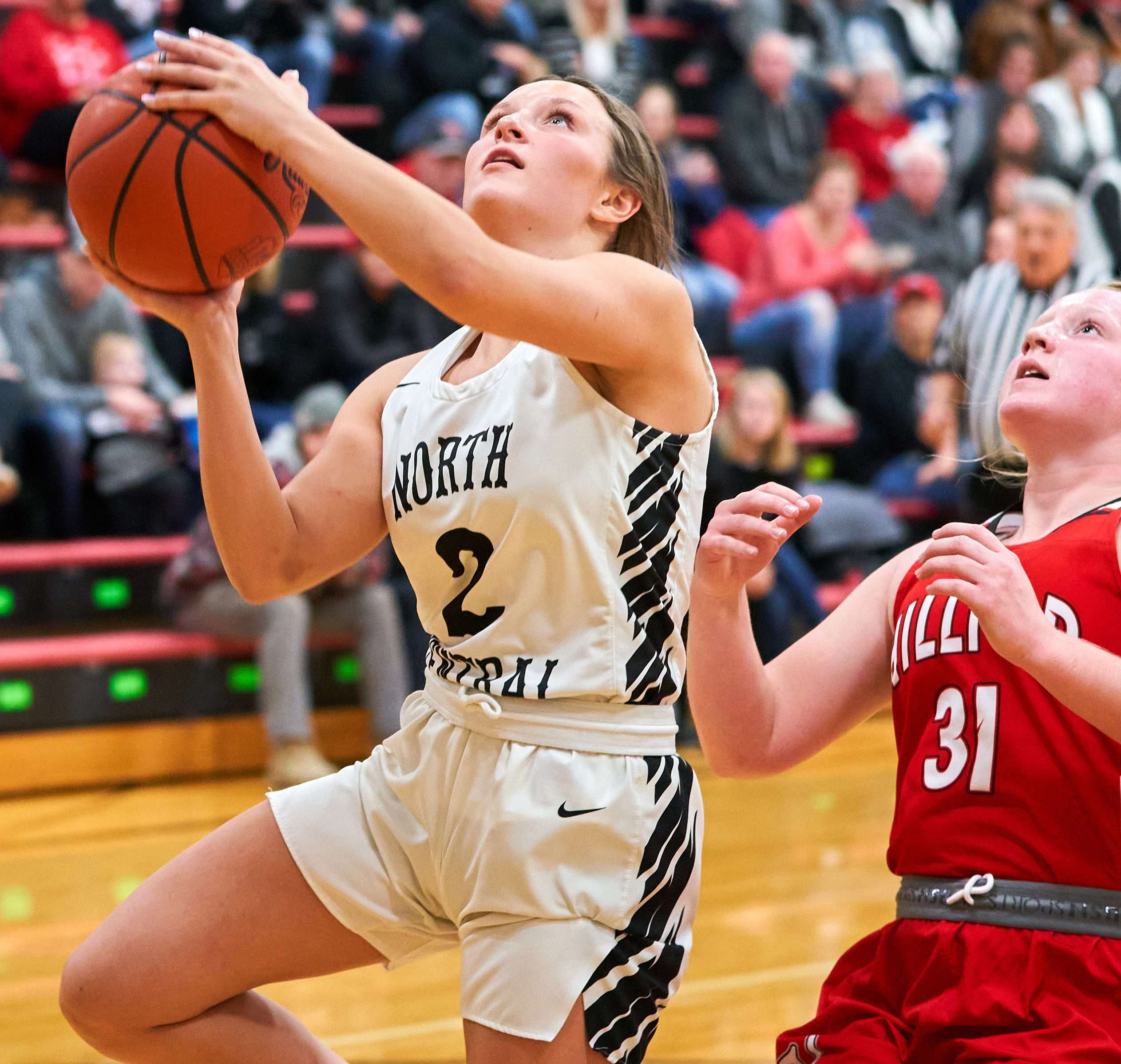 CAREER MILESTONE … Madison Brown finishes a fast break after a steal with a layup to put her over 1,000 points in her North Central career. (PHOTO BY RICH HARDING, STAFF)

PIONEER – Entering Tuesday night’s game the thing on everybody’s mind was North Central senior Madison Brown being just four points away from 1,000 in her career.

The Eagles started slow, but after Brown reached the milestone late in the first quarter, North Central found their rhythm offensively and shutdown Hilltop on their way to a 35-23 nonconference win.

Early on it was the visitors from Hilltop who were in their groove on offense with Mia Hancock hitting two triples and Jayma Bailey knocking down a pair of jumpers to give the Cadets a 10-3 advantage.

Following a North Central timeout, a steal and layup by Brown put her over the 1,000-point mark with her making a three-pointer earlier in the quarter to close to within one.

Down 11-6 going the second quarter, the Eagles quickly erased the deficit with a 6-0 run fueled by buckets from Isabelle Burnett, Darbi Stewart, and Lauren Balser to take their first lead at 12-11.

Libbie Baker stopped the run for Hilltop with a free throw, the Cadets only point of the second quarter, to tie the game at 12-12.

North Central would then go on another 6-0 spurt led by a Brown field goal and a 4/6 stretch at the foul line by Brown to put the Eagles ahead 18-12 at halftime.

A driving layup by Brown and a bucket from Stewart pushed the lead to 22-12 as Hilltop’s cold shooting continued into the third quarter.

After missing their first five shots of the second half, Hancock broke the ice with her third triple of the night at the 3:26 mark of the quarter as the Cadets only trailed 22-15 despite their offensive woes.

The Eagles responded though with a 7-1 run to end the quarter as Stewart added another field goal, Balser would get a steal and layup, and Burnett buried a three-pointer as time expired to give the Eagles a 29-16 lead.

Facing a 30-16 deficit early in the fourth quarter, the Cadets would get back-to-back baskets from Libbie Baker to trim the lead to 30-20, but North Central answered with Kendal Bonney scoring twice to put the game away.

Brown led all scorers with 14 points while Hancock had a team-high nine points for Hilltop.