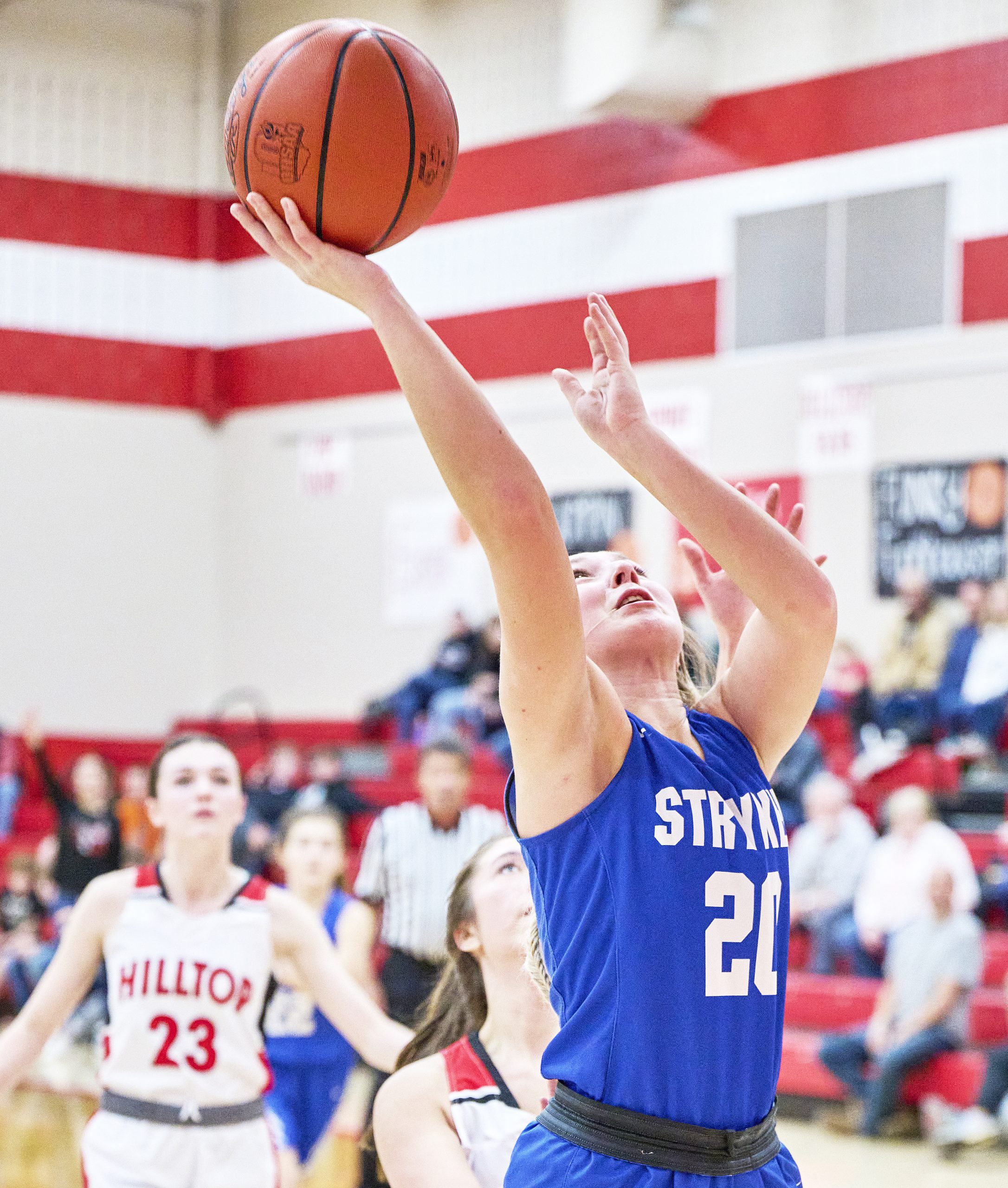 PANTHER RALLY … Alexia Wickerham looks to score inside for Stryker. Stryker rallied from a 26-13 halftime deficit to pull out a 40-37 win. (PHOTO BY RICH HARDING, STAFF)

WEST UNITY – It was a tale of two halves for Stryker as they found their shooting touch from three-point range in the second half to rally from down 26-13 at halftime to earn a 40-37 win.

After a back-and-forth opening quarter that saw Hilltop take an 11-10 lead, Libbie Baker had two straight offensive rebound buckets to open the second and push the lead to 15-11.

Alexia Wickerham answered with what turned out to be Stryker’s only field goal of the quarter to make 15-13 before a big run by Hilltop to end the half.

The 11-0 run by the Cadets started with two scores from Shaelyn Brown and another bucket by Baker to extend the lead to 21-15.

Hilltop (2-3) capped off the half with a triple from Molly Dickinson and then two more points from Baker to give her eight in the quarter and make it a 26-13 lead at halftime.

Stryker went just 1/14 from the field in the quarter while Hilltop was 7/12.

Addy Oberlin started the Panthers comeback with a jumper followed by two free throws from Sage Woolace, a bucket from Emma Fulk, and then a trey from Oberlin to close the deficit to 26-22.

A Wickerham free throw made it a one possession game before Fulk tied the game with a three ball and then gave Stryker their first lead of the night at 28-26 with a field goal.

Baker finally broke the ice for Hilltop with a three-pointer with less than a minute remaining in the third for Hilltop’s only points of the quarter and gave them the lead back at 29-28 after three quarters.

The final stanza started with a basket by Jayma Bailey for Hilltop, but Wickerham nailed a trey to tie the game 31-31.

After Baker answered with another bucket as Hilltop retook the lead, Kaitlyn Myers dialed up another long ball for Stryker to give the Panthers a 37-35 advantage.

It was then Mia Hancock’s turn for the Cadets with a layup to tie the game at 37 with 1:23 left in regulation.

That set the stage for Woolace on Stryker’s ensuing possession who rebounded her who own miss in the lane and then nailed a trey from the right corner to give Stryker a 40-37 at the 36.4 mark.

Following a Hilltop turnover and a missed front end of a one-and one by Stryker, Hilltop would get one more chance with 5.6 left.

Inbounding from in front of their own bench, Hancock would get a look at a triple to tie the game for Hilltop, but it came up short as Woolace rebounded and ran out the clock.

Baker ended the game leading all scorers with 17 and Woolace had 15 for Stryker.