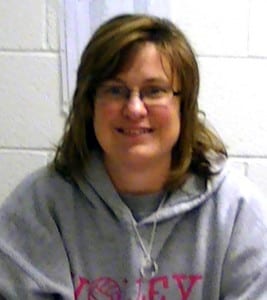 Third grade Stryker teacher Beth Morr says that she is “humbled by the outreach and support of the community, her family, and friends” that has come after her diagnosis with Stage 3 breast cancer and what doctors currently believe to be Multiple Sclerosis. She speaks in tears of the cards sent to her and of her sisters who travel long distances to help her. She is especially tearful when speaking of incredible support from her husband, Tim, and that of friends who have banned together to stand behind her and to organize a benefit to aid with medical bills and expenses.

The Beth Morr Benefit will include a freewill donation hog roast dinner, silent auction, and beef raffle and will be held on February 1 from 4:30 pm to 6:30 pm in the Stryker Schools Multi-Purpose Room. This time falls just prior to the Stryker Boys Basketball game versus Fayette.

That the benefit is scheduled this way has special significance to Morr. Her husband having graduated from Fayette and Morr having taught in Fayette schools for six years, she feels a special bond to the people there and notes that the only reason she left Fayette was that it was important to her to spend as much time as possible with her family and to be in the same school system as her daughter, Kennedy. Now in her fourth year with Stryker Schools, her own alma-mater, Morr says that she feels like both communities are her family.

Still, Morr did originally object to her friends organizing the benefit partly because she felt that there were “so many others out there that needed the help more”. Her friends, however, ignored Morr’s objections so that she could focus on her health and her family instead of on mounting medical expenses.

These medical expenses and Morr’s awareness of health problems began in November 2012 when she suffered what doctors originally thought was a stroke that left her need of daily occupational and physical therapy as well as a multitude of tests. These tests stopped once a tumor was detected in Morr’s left breast but will begin again after the cancer is fully treated. These tests will aid in confirming the doctors’ diagnosis of Multiple Sclerosis. Once the diagnosis is confirmed a whole new set of treatments will begin.

Having already undergone surgery and soon beginning treatment for the cancer, Morr believes that her prognosis is good. “Being positive and my faith are what is going to help me beat this. I am going to beat this for my family and for these kids,” she says, speaking of her students. It is this belief that drives Morr forward, which helped her through the daily therapy sessions so that she could walk again, and which has her working as much as possible so that she can be with the students who mean so much to her.
If there is one aspect that seems especially challenging for Morr, it is that she is a very private woman and that the organizing of the benefit has made her and the challenges she is facing very public. It is another reason that Morr originally objected to the benefit. Still, she has chosen to put the publicity she is receiving to use and tells women of all ages to make sure that they perform self-checks and have ultrasounds done as well as mammograms. It is her hope that by allowing her story to go public that other women, especially younger women not targeted by awareness campaigns, will become more aware and proactive.

Anyone seeking more information about the Beth Morr Benefit can e-mail bmorrbenefit@yahoo.com. All are welcome and it is the hope of Morr’s friends that many will come out and show their continued support.