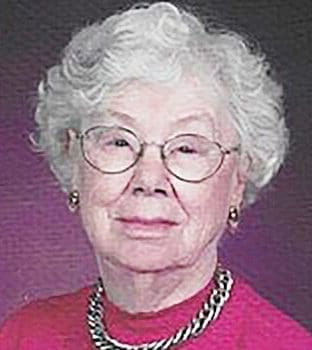 She was a 1935 graduate of Waldron High School. After graduation from Cleary College Business School in Ypsilanti, Michigan, she was employed by the Strelinger Company in Detroit.

As a homemaker, she worked with her husband to operate their Fulton County dairy farm. In 1949, she pioneered the idea of farm vacations in northwest Ohio, as advertised in the “Farm Vacations and Holidays” magazine.

Beginning in 1962, she became part-time secretary for the Zone School as well as full-time treasurer for the school board.

From 1966 until her retirement in 1982, she was the treasurer for the Four County Joint Vocational School and Career Center.

She was a member of the West Franklin United Methodist Church for over 70 years, where she served as treasurer of the WSCS for several years.

Most recently, Blake attended the West Unity United Methodist Church. Her favorite volunteer position was assisting the Rangers at Canaveral National Seashore Park during her 28 winters in Florida.

In her free time, she enjoyed reading, traveling, and playing bridge, but most importantly, she enjoyed spending time with her family.

Preceding her in death, in addition to her parents and her husband of 44 years, were three brothers, Stuart, Byron and Bill Boyd; four sisters, Mildred Cotter, Nora Dolan, Martha Fidler, and Pat Peebles; and two sons-in-law, Richard Hartnett and Bill McCarthy; one great-great-grandson, William McCarthy.

To send a flower arrangement to the family of Blake J. Shilling, please click here to visit our Sympathy Store.