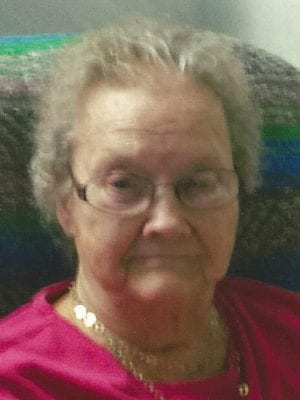 Bobbie worked at Spangler Candy Company as a packer for 37 years. She was a longtime member of First Baptist Church in Bryan. Bobbie has a passion for reading, and she also enjoyed caring for the roses that she and Carl raised, as well as gardening. She treasured the time she spent with family, especially the family dinners.

Visitation for Bobbie G. Adamson will be held Tuesday, October 11, 2016 from 5:00 – 8:00 p.m. in the Oberlin-Turnbull Funeral Home – Lynn Street Chapel, 206 North Lynn Street, Bryan. Funeral services for Bobbie will be held Wednesday, October 12, 2016 at 11:00 a.m. in the funeral home with her son, Pastor Carl Adamson and Pastor John MacFarlane officiating. Interment will follow in Shiffler Cemetery, rural Bryan. Visitation will also be held one hour prior to the service on Wednesday at the funeral home.

Those planning an expression of sympathy are asked to consider memorial contributions be made to First Baptist Church, 925 East Fountain Grove Drive, Bryan, Ohio 43506