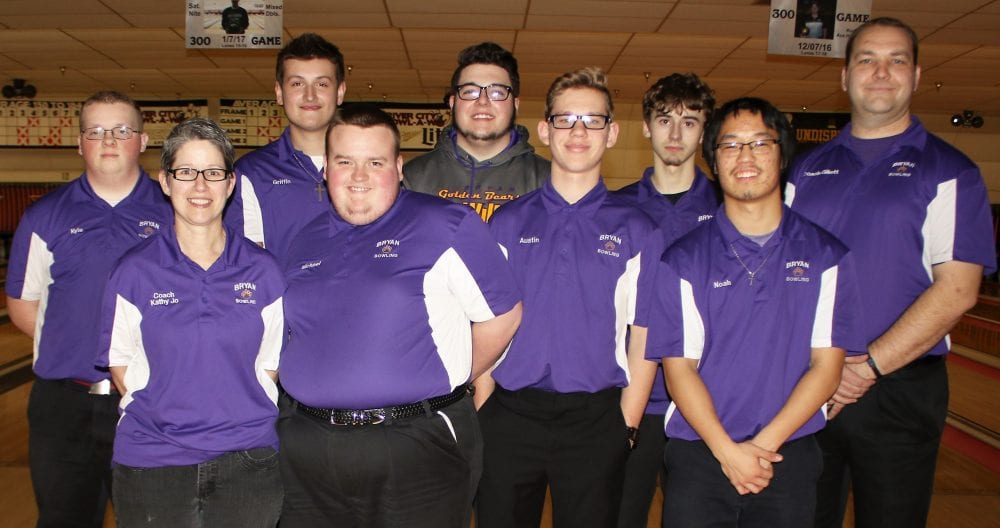 The Bryan High School bowling teams, girls and boys, do not hold their home matches at River City Bowl-A-Way in Napoleon but they certainly make themselves at home when they compete there. Fresh off their sweep of the NWOAL Championships at that venue the week before, the Golden Bears doubled down in dominating fashion and captured the girls’ and boys’ Sectional titles to advance to the District tournament in Rossford.

On Friday, Danika Hickey led the Bryan girls with a three-game 590 series, a score that placed her second overall individually, as the Bears won by 77 pins over Liberty Center, 127 pins over Wauseon and 321 pins over Napoleon. Backing up Danika’s outstanding effort was Jordan Easley with a 481, Emma Meade with a 464, Jade Easley with a 461 and a combined 426 from Kora Ellis and Madison Foth.

With a third place finish the Wauseon Indians also advanced to the next level. Mackayla Kearney rolled a 546 series to place fourth as an individual and Jenna Simon had a 469.

Evergreen finished seventh, Delta was ninth and Swanton came in eleventh place in the twelve-team tournament.

In the boy’s tournament on Saturday, the Bryan bowlers got off to hot start rolling a 1013 in the first game to open up a 330-pin advantage over eventual second place finisher Eastwood. The Eagles rallied in the Baker round but could not overcome the large deficit and lost by 58 pins. “It was one of the best starts we’ve had all season,” said Bryan assistant coach Dustin Gillet. “When they start that well it gives us a lot of momentum.”

Griffin Dean bowled a 244 in the first game on his way to a 635 series for an overall individual second place finish. Falling in behind Dean was Cory Hemenway with a 576, Noah Bany had a 571, Kyle Shafer rolled a 564 and Tycen Ogden came in with a 490. Napoleon and Van Wert finished third and fourth, respectively and will also compete in the District tournament.

The Wauseon Indians finished ninth and did not qualify as a team to move on but Nick Kearney rolled a 613 series and placed third to advance as an individual. Other team finishes included Evergreen in eighth, Swanton in eleventh and Delta in thirteenth.