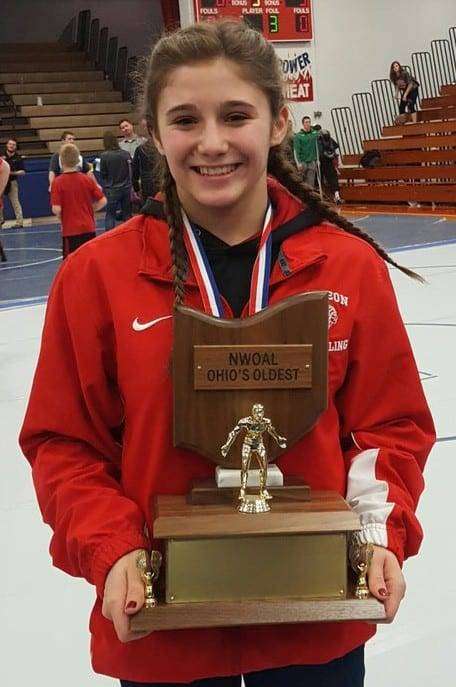 The Wauseon Indians ran away from the field to carry home their 12th league championship trophy during wrestling action at Patrick Henry High School.

Besides their nine champions, Wauseon had two seconds and three thirds. Winning individual titles for the Indians included: Gavin Ritter #106 with a 13-5 major decision over Jared Fahrer of Evergreen. Winning a first league championship and becoming the first female to ever win a NWOAL championship in the 54-year history of the event was McKayla Campbell #113 as she defeated Swanton’s Zach Schaller with a 19-4 technical fall. Hunter Yackee 132# won a tough match with a 2-1 decision over Gavin Grime of Archbold. Mauricio Barajas 138# also was a winner by one point with a 4-3 decision over Noah Mattin of Archbold. Sandro Ramirez 145# followed with a convincing 17-1 technical fall over Tommy Wolfenbarger of Montpelier. At 152# Xavier Torres was a 5-3 winner over Austin Wilson of Archbold. Andrew Bailey 160# gave the Indians their seventh match win with a 10-0 major decision over JD Osborn of Delta. At 195# Tony Banister became the twelfth wrestler in league history to wrestle his way to his fourth straight title. Banister was a 2-0 winner over Caleb Carpenter of Liberty Center. The final Wauseon winner came at 285# where Alex Sosa was a 3-2 winner over Tommy Lytle of Swanton.

Other area champions included Cole Mattin 120#, 126# Drew Mattin and Dylan Rogers of Delta and Zach Leahey of Swanton at 170#.