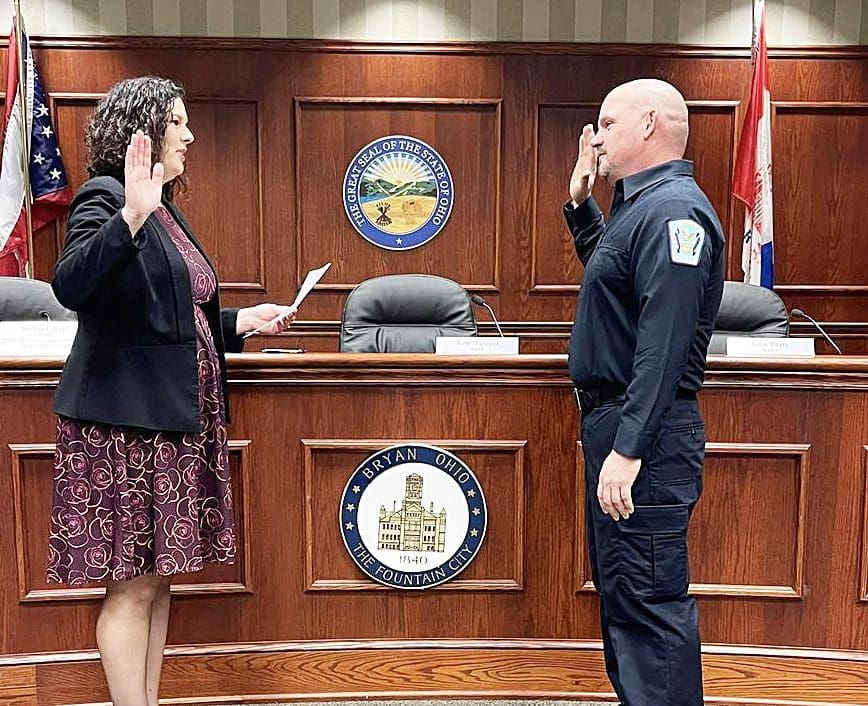 Randall, a 2000 Bryan High School graduate, earned his bachelor’s degree in Criminal Justice and then went on to attend the police academy at Owens Community College.

Following law enforcement training and certification, Randall began his career with Bryan City Police in 2005 and shortly thereafter took on a position with the Williams County Sheriff’s Office where he served as a road deputy and later K-9 handler for nearly 16 years.

Randall’s K-9 partner, Django, was up for retirement from the sheriff’s office at the end of 2022 and now is enjoying civilian life as the Randall family pet.

Now back in a Bryan City Police Department uniform, the first couple of weeks have been a “big change” for the former road deputy/K-9 handler turned School Resource Officer.

Randall has been busy learning the ins and outs of the job along with the layout of the school buildings.

“Our main role is school security and to make sure that nothing from the outside happens here.”

“We can either prevent the issues when they’re small or just deter them by being here. Beyond that, it’s mostly helping out where we can,” explains the SRO.

According to Randall, it’s been a nice change. “Today, I’m over in the elementary school, and the little ones are always happy to see us. They always want high fives and hugs.”

“The major news networks tend to focus on the negative, not the positive. It’s nice to try to plant that seed in the younger kids, for the high schoolers too. It’s kind of nice to have the first impact to be a positive one.”