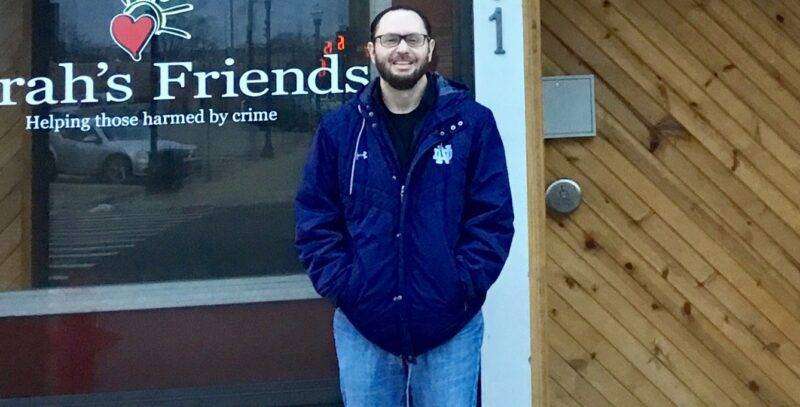 WBNO/WQCT GIVE BACK TO COMMUNITY … Program Manager Andy Brigle was happy to be a part of helping Sarah’s Friends in Bryan this year with the Annual Blizzard Auction. It was a great success and the money will go to help “those harmed by crime.” (PHOTO BY REBECCA MILLER, STAFF)

For the past forty two years, Radio Station WBNO/WQCT has given back to the community each winter by dedicating at least one whole Saturday for an eight hour auction to benefit a specific non-profit organization.

Program Manager, Andy Brigle, who has been with the station for twenty seven years, explained that they look for a group that has a need and uses volunteers for most of work that they do. A few of the ministries, non-profits and community groups who have been sponsored include Shalom Counseling and Mediation, the United Way of Williams County, Project Respect, Conquer Childhood Cancer Now, Williams County Community Theater Association, Cancer Assistance or American Cancer Society, and the Williams County YMCA.

Williams County Fair Board and Fair Foundation was the first one the station sponsored with an auction, as the grandstand had burnt down that year. After that, they just kept doing it each winter.

The group is chosen through a process of filling out an application and being singled out by the station as the one who will receive the funds that are raised by that year’s Annual Blizzard Auction.
This year, Sarah’s Friends is the recipient, and Executive Director Katie Cramer, said that the auction was a huge success with the total amount raised on January 25, 2020 just shy of $11,000.

She is thrilled for Sarah’s Friends to be the recipient and said that it will be great to have a reserve from which to draw, as the major sources of their income are grants, which have been getting cut recently and will continue to get smaller over the years. On the WBNO/WQCT Auction FB page, Katie sent out a Thank you, saying, “Wow!!! We cannot thank everyone enough for helping make today such a success!!”

“Thank you to all of the bidders for showing up in full force today in support of our mission, and to everyone who helped orchestrate the event. What an amazing fundraising opportunity and we are so thankful to have been selected as this years’ recipient. Thank you again for kicking off 2020 on a great start!!”

Ms. Cramer explained that Sarah’s Friends’ name was changed from Sarah’s House back in the late 90’s when it was realized that the community thought they were only a house where women and children who were victims of abuse, could stay.

“It is so much more!” Katie said, “We support, encourage and walk beside all people who are victims of crime, to help them walk from being a victim to a survivor. Some of the the main things for which the money raised by the Blizzard Auction will be used are for the actual program side…things such as rapid rehousing, transitional housing, and emergency financial assistance that is applied for by those in need.”

“Thank you to the community for almost three decades of continual support. We have been so blessed by the community and we couldn’t ask for a better one in which to have Sarah’s Friends. Next year will be 30 years!”

Planning for their involvement in the auction started in November. The nine Sarah’s Friends’ Board members solicited the items to be auctioned. The items were then divided into twelve different blocks, or categories, with twelve items in each block.

Then there was a larger one called a super block that ran all day with ten items in that. Things such as Cleveland Indian tickets, a family membership to the YMCA which went for $700, and a coach designer bag were featured along with many baskets put together by local businesses and business people.

Brigle explained that the bidding for each item is started at one third of the retail cost and all of the bidding is done on air. For a few weeks before the auction, those who want to bid are able to go online and get a Bidding Number or can get it by calling the station.

It took 30 to 45 minutes to complete each Block and anything left would get moved to the next block or to the Super Block. “It was a great success and a lot of fun,” Brigle said. “The YMCA family membership was the highest value item and it went for the closest to it’s worth,” Cramer said. “There were a lot of sports tickets, home improvement items, spa items and gift certificates.”

Brigle added that there were only a few items left and Sarah’s Friends will determine whether they will auction them privately online, or use them to minister to those in need who come to Sarah’s Friends.

WBNO/WQCT is already looking for a 2021 recipient so anyone involved with a non-profit, a ministry or a community groups who is made up of all or mostly volunteers, and have a need for the funding, should contact them.

They need to have a connection to Williams County by don’t necessarily have to be located here. For more information or an application call the station at 419-636-3175 or email them at WBNO@WBNO-WQCT.COM.