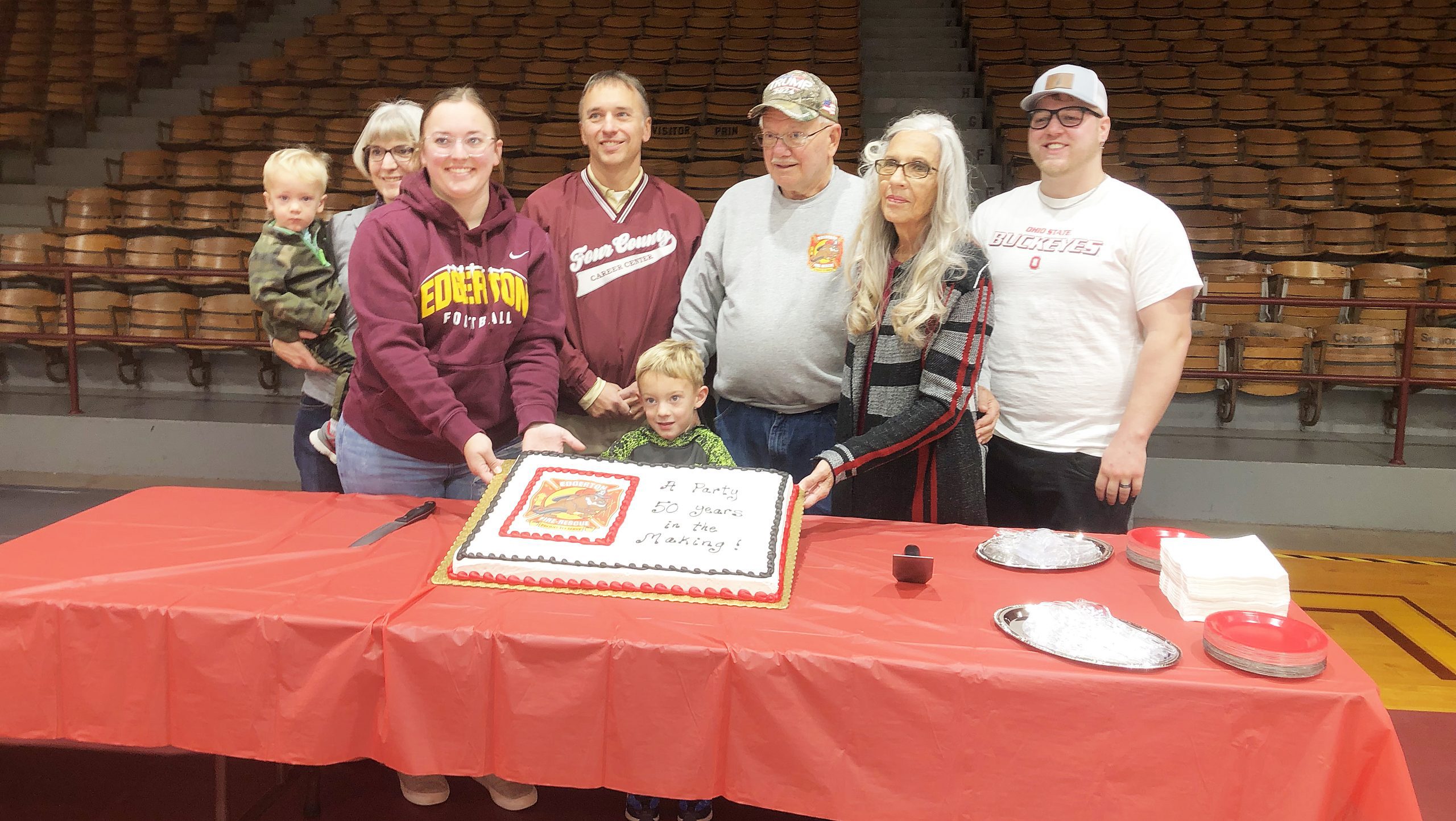 FAMILY … A proud family is pictured with Edgerton Fire Chief, Scott Blue, and his celebration cake, as he was honored for his fifty faithful years on the department. (PHOTO BY LINDSAY PHILLIPS, STAFF)

Just a few characteristics that define a great firefighter are someone who has compassion, honor, accountability, commitment, and respect.

All these characteristics and then some, can be seen in the Village of Edgerton’s Fire Chief Scott Blue.

Not only has Chief Blue devoted a lifetime of service for the Department, but he is also a certified Fire Safety Inspector and Fire Instructor.

On December 1, 2022, Chief Scott Blue had officially served on the Edgerton Fire Department for fifty years.

Chief Blue began his career in 1972 and worked his way up to fire chief in 1995. Since then, he has faithfully honored his duties with thorough work and dedicated behavior.

Chief Blue was honored with a surprise party on Friday, December 2 in the Village Office Gym.

Family, friends, fellow firefighters, and many others stood while Chief Blue entered the room as he was led by Fitzcharles. Blue’s family was so proud and his grandson ran to greet him.

Under Chief Blue’s leadership he has led the fire department to an Insurance Services Office Class 4 ranked department that protects the Village of Edgerton, St. Josephs Township, North ½ of Milford Township and West third of Center Township, totaling at ninety square miles.

Edgerton Mayor Robert Day began the open house with a small speech. Day stated, “First responders are just wired different, people who have the ability to go toward things where everyone has a natural instinct to run away.”

Mayor Day shared, “We just want to take this opportunity to say thank you Scott, to thank his family, being a firefighter with a family involved, people don’t realize all that it encompasses.”

“We wanted to celebrate you for your public years of service and more to come.”

A table full of Chief Blue’s favorite food was made for him, as well as a huge cake with “A party 50 years in the making” written in black frosting.

Some of those in attendance also brought gifts and cards for Chief Blue that laid next to his large cake and congratulations balloons.

A television was set out with photos playing on a slide show of memories. Chief Blue’s firefighter gear was also laid out on honor of him next to his helmet.

Fellow firefighter, Mike Goebel was in attendance and when asked about his opinion on Chief Blue, he stated, “This department would not be what it is today with out him.”

Butler, Indiana Fire ChiefJeff Shultz added to Goebel’s comment and shared, “My dad kinda started with him from Butler, so we’ve been back and forth.”

“The really interesting about Butler and Edgerton with Blue and everyone else, is how well we work together, and I think he’s part of that, making everything work together.”