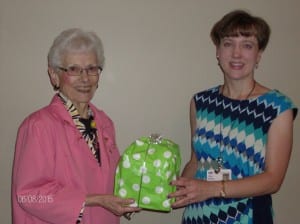 Deanna Gipe, auxiliary past president and program committee member, introduced Tara who spoke to the members following a Swiss steak meal with homemade pie for dessert. There were approximately 27 members attending to hear about eating healthy meals.

Tara used a powerpoint presentation showing the five basic food groups symbolized using a round dinner plate divided into nearly four equal sections including fruits, vegetables, grains and proteins, with a cup on the side for dairy. She said “This is a no-brainer way to follow a healthy diet”.

Vegetables, especially fresh, contain many vitamins and a diet with more fruits and vegetables will help those with heart disease and diabetes. Carbohydrates control is very important for diabetics. Controlling diet with smaller portions and eating at regular times during the day should also be considered. A total of 2-1/2 to 3 cups of vegetables each day is a good “rule of thumb”.

The dietician also suggested ways to measure portions using 1 cup equals a closed fist and ½ cup equals a cupped palm of the hand and 3 oz. equals about the size of a standard deck of cards. Tara also gave examples of making substitutions, such as trading 100% fruit juice for a serving of fruit. Dessert can be enjoyed at times, keeping in mind smaller portions.

In addition to meat, poultry and seafood, proteins are also found in eggs, beans, fish, nuts and seeds. Daily portions for dairy should include 3 cups of milk, yogurt, natural cheese, and dairy desserts (low fat and low sugar). Dairy foods are important for vitamin D and calcium to prevent osteoporosis. A light snack between meals is allowed.

Whole grains are healthy choices and eating oatmeal is great for breakfast. Don’t be afraid to try other whole grains such as bulgur and barley. Processed foods are many times high in sodium, which should be avoided since most natural foods contain enough sodium. Sea salt is lower in sodium and contains more minerals than regular table salt, but does not contain iodine.

Regarding beverages, Tara recommended drinking at least 8 oz. of water with each meal and also between meals. Use of vegetable oils, especially canola, olive or peanut oil was also discussed. (Coconut oil has more saturated fat than butter.) When eating out, remember that one should not overindulge—simply keep healthy portions in mind and ask for a “people bag”.

At the hospital, patients are served meals selected from one of six different diets specified by their respective doctors. Tara concluded her talk by passing out brochures showing healthy suggestions for breakfast, lunch and dinner menus for everyday use and food tips to follow.

Following the program, Auxiliary President Joyce Schelling conducted the regular meeting. Roll call was answered by sharing “What is the most unusual wedding you have attended?”. Thought for the day was “Never doubt that a small group of thoughtful, committed citizens can change the world” by Margaret Mead.

Barb Dietsch conducted a special candlelight memorial service leading a silent prayer in memory of auxiliary members who passed away during the past year—Norma Ensign, Wilma Kurtz and Carol Custer.

Reports were given by Secretary Connie Dunseth, Treasurer Barb Dietsch, and various committee chairmen. Volunteers who work at the Montpelier Hospital gift shop were recognized and thanked and a special appreciation certificate was presented by President Joyce to Hospital Gift Shop Manager Vivian Brown for her many years of dedication and service to the auxiliary.
From the proceeds of the Hospital Gift Shop during the past year, Manager Vivian presented a check to the auxiliary in the amount of $2000.00. Auxiliary members expressed their appreciation with a round of applause.
Thank-yous were extended to Vice President Armeda Sawmiller, Past President Deanna Gipe and Secretary Connie Dunseth for assisting with luncheon setup and decorations. Auxiliary members voted to approve purchase of various “wish list” items submitted by Montpelier Hospital department heads and to commission a hummingbird painting as a memorial for Carol Custer.
Program committee members including Deb Barry, Gloria Poorman, Armeda Sawmiller and Joyce Schelling will meet Wednesdays, July 8 & 29 at 1:00 p.m. at the home of Armeda. Patient favors during the summer will be taken care of by Janet Bennett-June, Vivian Brown-July, Connie Dunseth-August, and Ruth Cooley-September.
Executive board members will continue to meet during the summer months on the first Monday at 10:30 a.m. in the hospital conference room. General meetings of the auxiliary will be suspended until October, with September designated as membership month.
Prior to adjournment, auxiliary members participated in a “fun tax” activity. President Joyce thanks all auxiliary members for their service and dedication to the organization during the past year and hopes for continued support during the coming year.