Class Of 2022 Inducted Into Wauseon Athletic Hall Of Fame 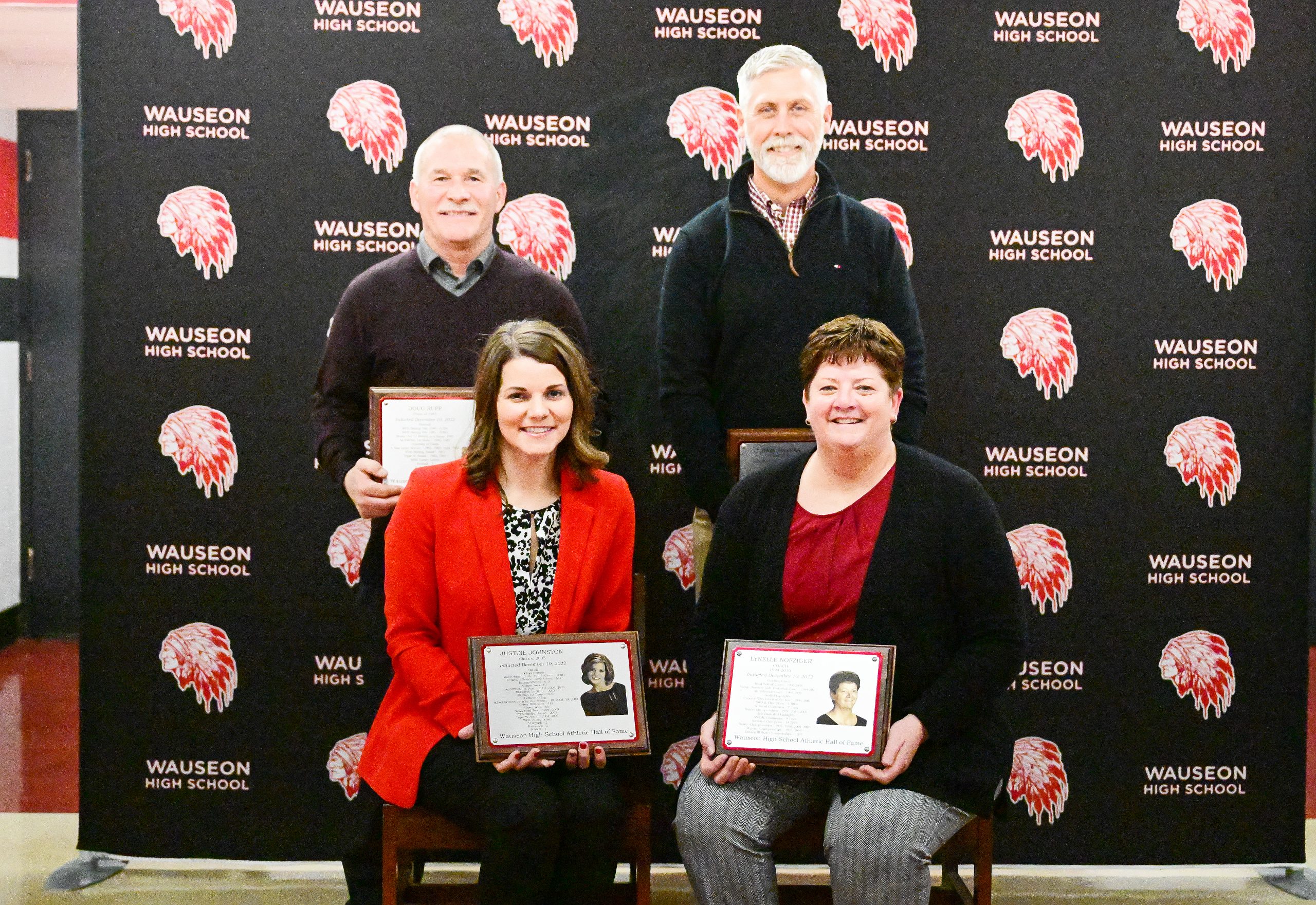 WAUSEON – On Saturday, December 10, 2022 the latest class was inducted into the Athletic Hall of Fame at Wauseon High School.

The ceremony itself took place in between the junior varsity and varsity basketball games that night as each inductee was introduced and was presented a plaque by Wauseon Superintendent Troy Armstrong.

The first inductee introduced to the crowd was Doug Rupp, a 1981 graduate of Wauseon High School.

Doug was a three-sport athlete at WHS and earned 8 varsity letters, 3 in football, 2 in basketball and 3 in baseball. In baseball, he won the batting title as a junior (.356) and as a senior (.483).

The senior average was the highest in WHS history for 32 years. He was 1st team All-League as a junior and senior.

Doug was the 1981 Sterling Award winner and was also a two-time Triple W Award recipient.

Bill Green, WHS baseball coach, said Doug’s performance in the sectional finals against Fairview in 1981 was the most dominant high school pitching performance he had ever witnessed.

Doug struck out 17 batters and only gave up two weak singles. In the summer of 1981, he led the Wauseon Legion team to 6th place finish in the state tournament. He was 7-0 on the mound that season.

Doug was recruited by the University of Toledo as an outfielder, but after his performance at the legion tournament, he was offered a preferred walk-on position as a pitcher.

After an effective freshman season, Doug earned a scholarship. He was an integral part of the UT bullpen from 1982-1985.

He was known as the crafty little lefty because of his great breaking ball and change-up.

One of his highlights occurred during his junior season against #5 ranked Michigan. He was brought in during the 6th inning to get out of a jam.

He got Barry Larkin (future Cincinnati Reds Hall of Famer) to ground out and end the rally as UT won the doubleheader.

Doug is the only WHS baseball player to letter all four years at a Division I school, without red-shirting.

He is in his 37th year as a teacher and coach at Morenci Middle School in Morenci, Michigan.

Doug and his wife Lisa, live in Wauseon and will be celebrating their 30th anniversary on May 22, 2023. They have two sons Trey and Brady.

Dave Sauber is a 1988 graduate of Wauseon High School. During Dave’s athletic career at Wauseon, he earned eight varsity letters, including 4 in track, 2 in basketball, and 2 in football.

He was a two- time Triple W Award recipient, along with being the 1988 Sterling Award winner.

Dave went on to play 3 years of college football at Bowling Green State University before a knee injury ended his career.

In football, Dave was recognized for delivering big plays. He scored over 10 touchdowns from more than 50 yards.

Dave scored 23 career touchdowns from multiple positions, including as a receiver, running back, defensive back (interceptions), as well as punt and kickoff returns.

One of his fondest memories was a 70-yard punt return for a touchdown in a 9-2 victory over Napoleon, since his father was a Napoleon alumnus.

In basketball, Dave was a two-year letter winner and captain during his senior year.

He was also recognized for his accomplishments as a player in the District VII All-Star game.

Coach Ken Burgei said, “Dave was an outstanding athlete who was not only one of our top scorers, but an all-around team player with exceptional defensive, rebounding and leadership skills.”

Dave and his wife, Andrea, have two children, Lexi, and Noah. His entire family are all Wauseon alumni.

Dave has been a buyer for Sauder Woodworking for over 25 years and resides in Wauseon.

Justine Johnston is a 2005 graduate of Wauseon High School. While at WHS, Justine earned a total of 8 varsity letters, 2 in both volleyball and basketball and 4 in softball.

She was a Sterling Award winner and received the Triple W Award twice. Justine attended Defiance College and earned a degree in Sports and Recreational Leadership.

Justine was definitely known for her dominance on the pitcher’s mound. In her softball career at WHS,

she broke six individual school records and all of them are still standing. She owns the lowest ERA for a season and a career at 0.448 and 0.781, respectively.

In the 610 innings Justine pitched for WHS, she won 63 games, which are both school records.

She was 1st Team NWOAL three times along with being named to 1st Team All-District and All-Ohio in 2003.

She broke the record twice for season wins with 18 and 19 in her junior and senior years.

While winning three conference championships, she helped her team make it to the Division III NCAA Final Four in 2008 and 2009.

Justine is a territory manager for a national distribution company and was recently recognized as the top salesperson of the year.

Justine added, “I would first like to thank God who made this all possible. I also would like to thank my family for their continuous support throughout my sports career.”

“There is not a game I can’t remember a crowd there cheering me on. But I will forever be most grateful to the man who was always there to catch every pitch and encourage me to live each moment as if it were a 3-2 count. This one’s for you, Dad!”

Lynelle Nofziger is a 1988 Pettisville High School graduate. In high school, she participated in volleyball, basketball, and softball for four years.

After graduation, Lynelle earned a full-ride basketball scholarship and attended Marshall University for a year and a half before transferring to Kent State University where she earned a Bachelor of Science in Mathematics Education and General Science in 1992.

As a college student, Lynelle played basketball all four years. In 2002, while teaching and coaching at Wauseon, Lynelle went on to get her Masters of Education in Classroom Technology from BGSU.

Lynelle came to Wauseon Middle School in 1993 when she accepted a position as a middle school math teacher.

She coached junior high volleyball for several years, was the girls basketball varsity assistant for 22 years, and coached softball for 16 years serving as the head coach for 13 of those years.

Lynelle also played an integral role as the girls basketball varsity assistant for many years.

She was a part of the longest win streak (52-0) along with 9 NWOAL titles, 14 Sectional titles, 4 District Titles, 2 Regional Titles, and 1 State Championship in 1997.

One of Lynelle’s players said, “I played at the college level, and she is by far one of the best coaches I came across.”

Lynelle lives in Wauseon with her husband Matt. They have two boys, Hunter and Kohen.

Lynelle still teaches at WMS and continues to impact the lives of her students on a daily basis.