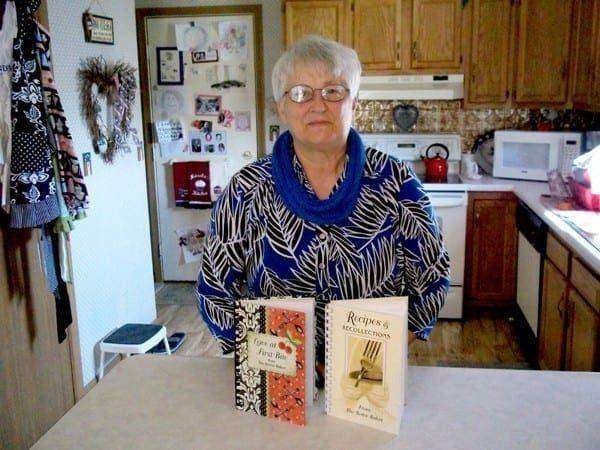 By: Kay Raypholtz / THE VILLAGE REPORTER

Marsha Baker of Pioneer, Ohio, has long had a love for baking. For years, she has been telling people, “I became The Better Baker after hearing folks say they thought I was a good cook…I told them ‘but I’m a Better Baker’ because I love living up to my name!” Growing up, she was the only girl in the family, followed by three younger brothers.  Her mother loved so sew, and Marsha was allowed in the kitchen as her mother worked on her sewing. That’s where she first developed her love of cooking and baking.

Following her graduation from North Central High School, she married Ron (known as Bean) Baker, also a North Central graduate. The couple has now been married 45 years, a union that produced three children: daughter Deb Taylor of Crestline, Ohio, who is mother to Marsha’s three youngest grandchildren; son Dan Baker of Fayette, father to their oldest two grandchildren, and son Dave of Pioneer, Ohio, father of the 3 in between.  She has eight grandchildren, five of whom have red hair like their grandfather Bean.

During her husband’s 20 years of service in the Marines, they lived in South Carolina, California, Texas, and Washington. One of her most favorite locations was Anchorage, Alaska, where they lived for eight years. The couple returned to Pioneer, Ohio, in 1989. Living on a frugal budget honed her ability to create cost effective recipes that were also very tasty. She said that although she is not great at creating new recipes, she enjoys changing existing recipes to make them more unique, easy and to her taste.

Marsha has had three of her recipes published in The American Profile, a nation-wide publication that is included in many papers, and is added in with the Bryan Times on Tuesdays. Friends asked her if she would ever consider writing her own cookbook. The idea took flight, and after 14 months of working on compiling her recipes into printable form, she was published by Morris Press. Her first book, “Recipes and Recollections” has 300 recipes, mostly favorites from friends and families. Her second book, “Love at First Bite” includes 202 recipes, 100 of which have only 6 ingredients or less. Another 50 are lighter choices. Her second cookbook includes four of her own photographs. She also includes a section of “Homemade Mixes and Substitutes”. In her first book, her table of weights and measurements and quick substitutes was in the back of the book. In her second book, they are they are included inside the front cover for added convenience.  Following the success of “Recipes and Recollections,” which sold just under 600 copies, Marsha realized there was a demand for even more of her luscious recipes. She wrote her latest book, “Love at First Bite.” Copies arrived just last week.

Marsha feels humbled by her success. She never thought she would write a cookbook, let alone two of them. She considers herself to be very blessed, and was raised a woman of faith. Her father, Bob King, formerly of West Unity, was a member of the Galilean Gospel Quartet, and after Marsha left home, he became a pastor. In 1985, her mother and father moved from Michigan to New Mexico to serve as missionaries. Marsha’s faith continues to be very important to her, and she and husband Bean are very active in their home church Hillsdale Baptist where she teaches a Wednesday night class of 2nd – 3rd graders, teaches junior church once a month, serves as secretary for her husband’s Sunday School group, and  actively leads the ministry of Operation Christmas Child in her church, during which members in the church and in churches across the country fill shoe boxes full of such items as games, toys, school supplies, hair ribbons, tooth brushes and other hygiene items, and any other things that children may enjoy or need. These boxes are shipped overseas through the organization Samaritan’s Purse to needy children. Locally, Archbold Container provides boxes for the project to their church. Last year, Marsha and her granddaughters were able to fill 12 boxes, and as a church, nearly 300 boxes were filled. Husband Bean serves in the choir, teaches the senior citizens Sunday School class, and leads a local Bible study.

Marsha’s admiration of her husband is obvious. She is proud of his service to our country, and her cozy home in which statues of the American eagle and Americana are prominently displayed pays homage to that pride. She said that Bean is “the most patriotic person I know.” He is often asked to speak for Memorial Day services within the county.

It’s not surprising that Marsha is often called upon the provide dishes for events. She said that the dish she most often cooks is her Cheesy Chicken Chowder, a thicker chicken and vegetable chowder that she often provides when people are grieving or recovering. Her favorite recipe is her mother’s Cowboy Cookie recipe that she includes in her first cookbook. She describes it as an oatmeal, chocolate chip cookie which reminds her of her mother, and is a comfort food. Remembrances and memories are important to Marsha, and inside the first pages of her first book, she included a picture of her parents, and her brothers and children shared their favorite memories of her parents. Though these memories are permanently in print for a lifetime, those thoughts make Marsha misty-eyed, and it’s apparent that much love and happiness has been shared.

Marsha is a warm and friendly woman, and was eager to offer up a treat at her table. She made Diet Coke Mug Cake with some soda pop, chocolate cake mix, and a cookie at the bottom. The result was a warm, chocolate-y concoction of goodness that satisfied the taste buds and elicited high approval.

This new author has been sharing her recipes on her blog “The Better Baker” at http://thebetterbaker.blogspot.com/ for about 4 years now. She also has a Facebook page “The Better Baker Blog and Cookbooks” and she just turned over 7,000 likes this week. She also submits an article to the Leader Enterprise twice a month. Her recipes reflect her desire to take something and make it different. She has a drive to create and this is her favorite way to unwind. In what little spare time she has, she also likes to make crafts with a focus on those that are fast and easy. She wore a colorful scarf made from a t-shirt, but which looked high-end.

There is no doubt that Marsha’s recipes include lots of love. This may be one reason why they are so delicious! That love extends into her everyday life, and after spending just a little bit of time with her, you feel as though you’ve made a new friend. A song whose lyrics are included at the front of her new book seems to sum up Marsha’s philosophy: “To God Be the Glory.”

The public is invited to come meet Marsha Baker for themselves at her upcoming events for her new book, “Love at First Bite.” Signings will take place at the following locations, with copies of her book available for purchase at the price of $15 plus Ohio tax:

Monday, September 9 at the Hillsdale Library in Hillsdale, Michigan, on West Bacon Street from 5 – 7 p.m.

September 19 at the Leader Enterprise office from 5 – 7 p.m.