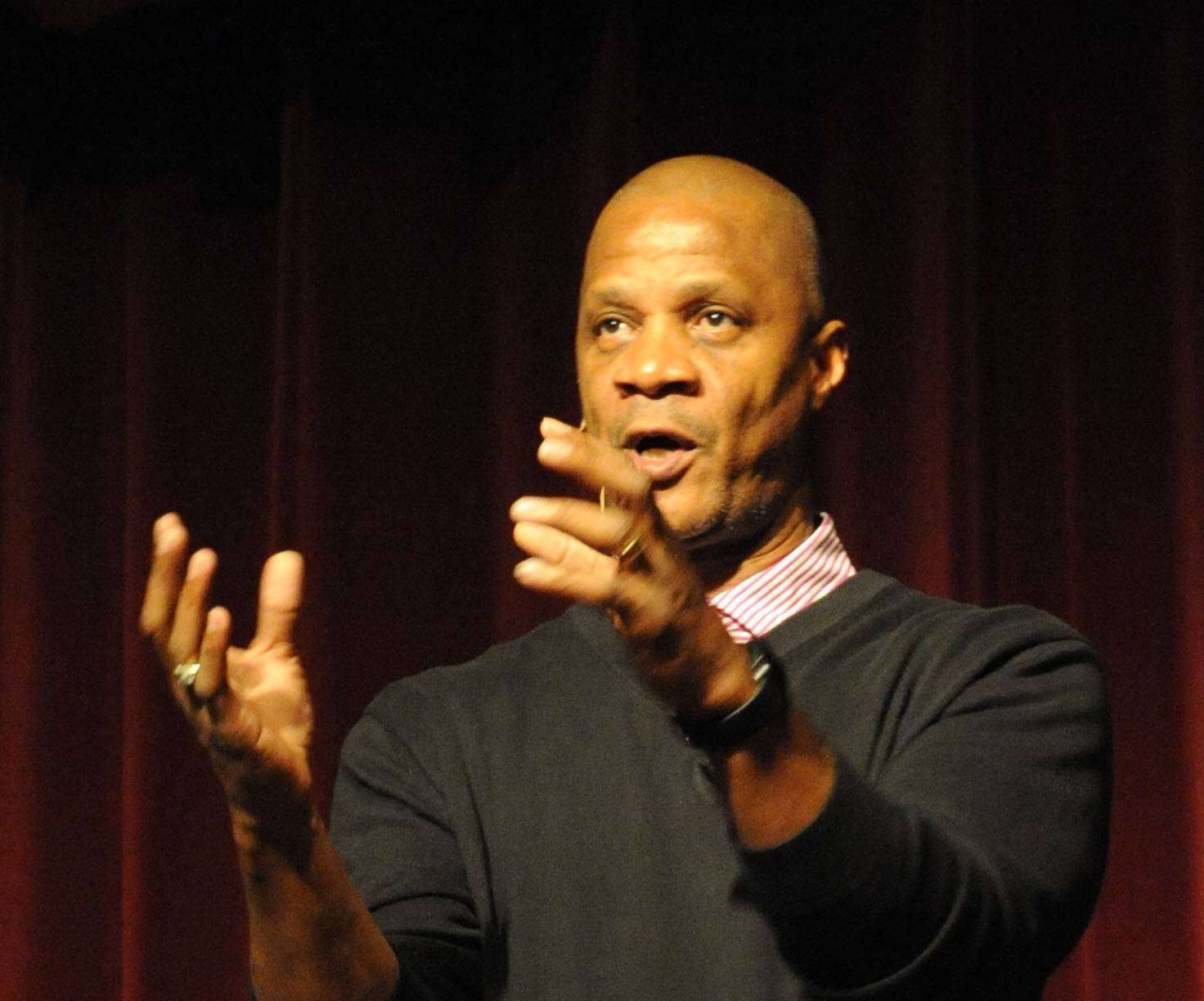 On Wednesday, October 10, Strawberry shared his life story with a packed house at Sauder’s Founders Hall. Strawberry’s appearance was made possible by the Pettisville Man Cave organization.

Although Strawberry experienced an incredible amount of success during his 17 year major league career, he still struggled with alcoholism and drug abuse.

During that time he also had two failed marriages that ended in divorce. He also spent time in prison, and battled colon and kidney cancer, and several failed rehabilitation efforts.

It all came to tragic hilt when his second bout with cancer led to a relapse to his chemical dependency, and left him bankrupt and facing another jail sentence for tax evasion.

Although to most it seemed Strawberry had it all. In reality all he was doing was trying to get well. Darryl grew up in the midst of difficulty. When he was 13, his abusive and alcoholic father left his mother, Darryl and his four siblings.

At 14, Darryl’s father returned to the home with a shotgun and threatened to kill the entire family. Fortunately Darryl and his brothers stopped his father from carrying out his intentions.

Strawberry was estranged from his father for his entire baseball career and never had contact with him during that time. Strawberry held on to a lot of bitterness because of the pain his father had inflicted on his mother and Darryl’s family.

However, according to Strawberry about 5 years ago God called him to make amends with his father. “I was headed to a marriage conference in California when God spoke to me and told me to go the hospital and see my father.”

He said God directed him to repent for keeping his father out of his life. He also directed Strawberry not to mention what his father had done to his mother and Darryl’s family. He told Darryl to forgive his father and to ask his father to forgive him, as God had forgiven Darryl.

Reluctantly Darryl said he listened to God’s instruction and made the visit to his father. Strawberry shared that also in that visit God directed Darryl to lead his father to the Lord. Darryl did so, and his father accepted Jesus Christ.

According to Darryl his father died 5 months later. Immediately after the visit, Darryl stated he felt that God had set him free from all the anxiety and bitterness he had regarding the relationship with his father.

He went on to state that God had sent him to his father to make Darryl well. Strawberry emphasized that even though it appeared that he had it all during his baseball career, that he was empty.

“I had it all, but I had nothing! I wasn’t a man until I met Jesus. All the things in baseball mean nothing, I don’t even like baseball! None of that matters now.

What matters is that I am saved and restored through the blood of Jesus Christ.” Darryl went on to share that his mother was a part of his transformation. “My mother didn’t care about my baseball success. She was praying for me to find God.

She kept praying for me and my siblings. She knew what was best!” Strawberry gave all the glory to God for his transformation. He shared the turning point in this resurrection.

“My journey started 15 years ago with Tracy (his current wife and a recovered addict herself). I was 3 million dollars in debt, didn’t have a driver’s license, she was pulling me out of drug houses, I was shooting dope, smoking crack, I just wanted to die.” He told Tracy, “Why don’t you and God just leave me here to die?”

Her reply was, “You’re not that lucky!” Darryl went on to add a powerful statement, “If you have never seen a miracle you are looking at one tonight!” Although he has had no formal divinity training, Strawberry is now a pastor.

He attributes this to his calling by God and his studying of the Bible and God’s word. Strawberry stated at first he wrestled with God over his calling and said he didn’t want to preach. He said God spoke to him and said he WOULD preach!

“I do what I do today because God saved me. I’m a sinner, I just don’t practice it any more. God rescued me. He was the only one that could.” Darryl challenged all those in attendance to go out and preach the gospel to others. “We need to commit to doing this daily and we have to do this to save our children. God is challenging us to follow the Bible and his principles.”

Strawberry stated his mission today is to save souls. “Winning others to the Lord. At the end of the day that’s what it’s all about.” He said what is going to make us well is to love and help others.

“Our youth are facing so many obstacles and are broken as well. So many have been abused. It is our duty to them and to God to help make them well.” Strawberry also shared his thoughts on addicts and addiction.

He stated he has been working in Ohio to get the churches to work on addressing addiction issues. Strawberry stated that there are 15 deaths a day in Ohio related to addiction and overdose.

He stressed to those in attendance not to point the finger at those battling addiction, but instead love them, just as Christ loves us no matter what. Strawberry challenged the men in the audience to be accountable for their families.

“Men must step up to be what God wants them to be.” He stated that the children will repeat what they see. “You’ve got to be serious about your relationship with God. If you don’t the enemy is going to take your kids, he’s going to take everything you have.”

“He’s going to deceive you! Get your heart where it needs to be!” Humility is a trait that Strawberry believes is very important in our walk with God.

“If you can humble yourself God will exalt you. Get rid of you ego. Ego stands for Easing God Out.” Strawberry closed the night by calling down those who needed to “Come back home”.

At that time Strawberry came down from the stage to meet several audience members who came forward. Strawberry went on to pray for them and led them through accepting Jesus Christ, before finally leading the entire audience through a closing prayer.

Both Strawberry and his wife Tracy are pastors. Their purpose and passion is to serve Jesus Christ by sharing the gospel with others. They both travel the country to spread God’s message and love.

For more information on Strawberry, and he and his wife Tracy’s mission. Please visit their website at https://findingyourway.com/