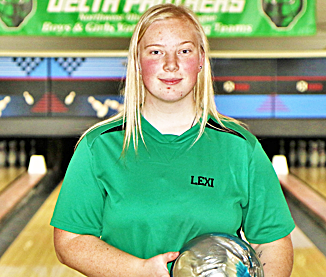 Delta senior Lexi Brown started her season off with a bang on December 2 in their league opener by firing a 300 in game two at Swanton Sports Center.

It was a career first for Brown, who’s previous high was a 224 during her sophomore year.

“I was able to keep my cool and listen to my coach through the whole thing. As I was getting close to 300 I kept my strategy the same and that’s what helped me to reach the 12 consecutive strikes”, said Brown.

Brown stated she is relatively new to the sport. “Before high school I rarely bowled, so you can understand how I felt going into bowling my freshman year basically knowing nothing.”

“I have now been bowling for four years, including this year. I have worked up a lot of skill since my first year and it has definitely made an impact.”

Rolling a game of 300 was something Brown wasn’t expecting. “I was in shock. I was so excited about what had just happened”, said Brown, describing the moments immediately after the final strike.”

“I ran up and hugged my coach and teared up as I was hugging my parents with pure joy. I had an entire crowd behind me that was there for me.”

“It was a moment of disbelief, it didn’t feel real when it happened, since it doesn’t happen often”, Brown concluded.