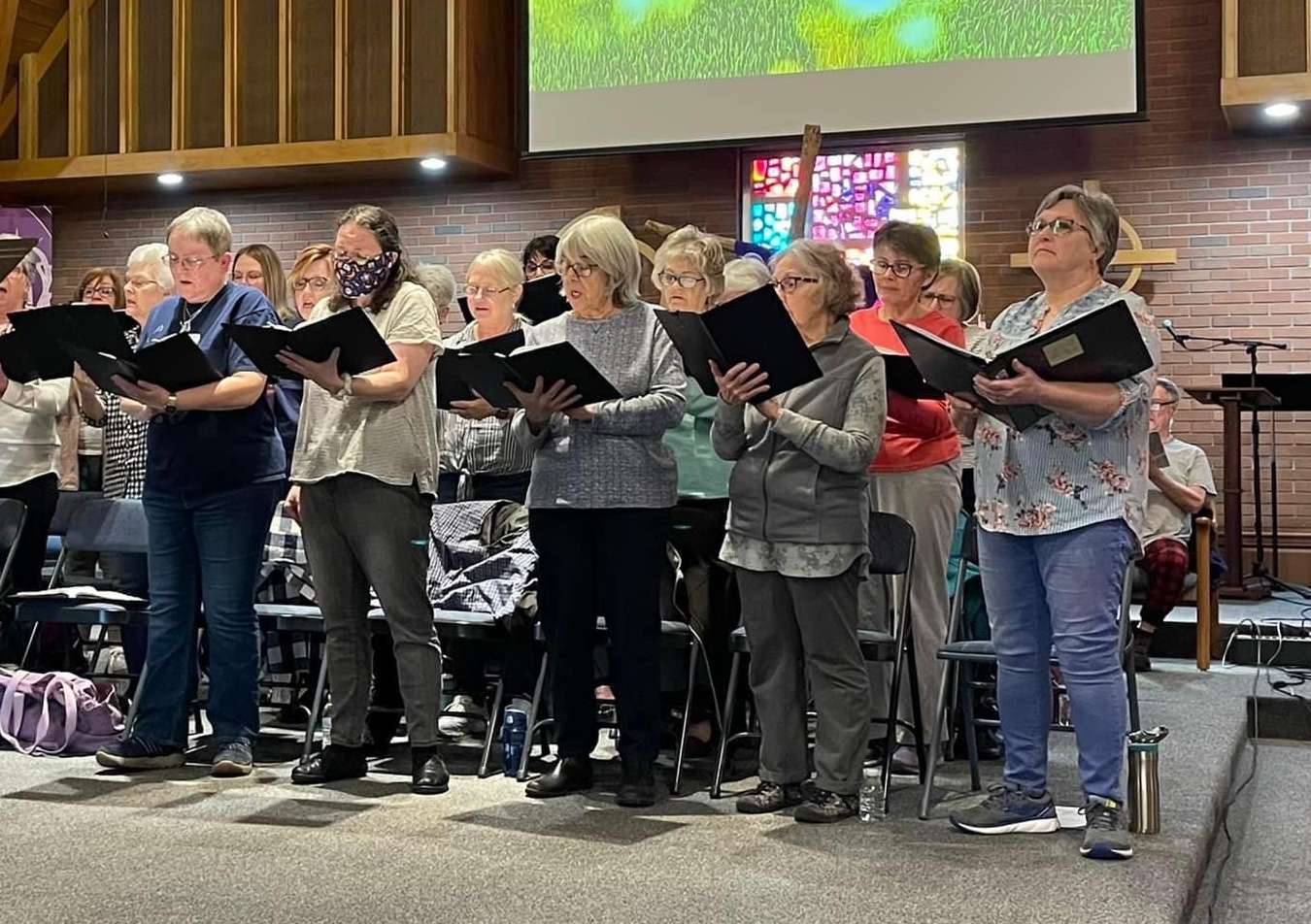 PRACTICE … Delta/Wauseon’s Choir is shown practicing for their performances that occurred on March 27th and April 3rd for a celebration of Christ’s Resurrection.

With a true desire to honor and praise God, married couple Nancy and Phill Badenhop decided it was up to them to start the Delta/ Wauseon Choir in 2016.

Nancy was working at Christ United Methodist Church as their office manager when Howard Warncke approached her and made a statement about local choirs shutting down due to lack of attendance.

Following Nancy and Howard’s conversation, Nancy went home with one thought on her mind, “Choirs can’t stop! God wants us to Praise him!”

Nancy and Phil, who both have degrees in music and music education, gathered about twelve people and asked local churches First Church of God and First Christian Church of Wauseon to join Christ United Methodist at their midnight service to see the small choir they put together.

After a great turnout, the choir began rotating Easter and Christmas performances between the three churches.

Wauseon’s choir continued to grow and started an official Facebook page for the choir. After the page was created and the news was heard, Delta folks began to join in.

Fast forward to six years later, the choir has over thirty members. This year, Wauseon/ Delta Choir added two churches into their rotation, Haven Heights Baptist in Wauseon and First Assembly of God in Delta. Nancy shared, “What a blessing this has been to our community and to us.” Donations go toward new music, DVD’s for performances, along with other choir costs.

Persevering after the shut down from Covid, the choir is completely funded on donations from generous people in the community.

Nancy stated, “We were so thrilled that we started back up again in 2021 singing Christmas Forever Amen.”

Mrs. Badenhop also shared, “We use the church’s is sound men, which we couldn’t do without them. They are our anchor!”

On March 27, in celebration of Easter, the community choir presented Wauseon’s Haven Heights Church with a call and response performance of “He is Worthy,” featuring soloists Rachael Jones and Buffy Kelb.

Nancy added, “It was a great turnout of over 100 people, and it was very powerful with the acoustics in that church.”

A second performance for the choir was held at Delta United Methodist on April 3, with the same song and solo acts.

Wauseon/Delta Community Choir is always accepting members, for those interested please contact Nancy Badenhop at pnhoppers@gmail.com, or by phone at (419) 966 9879.