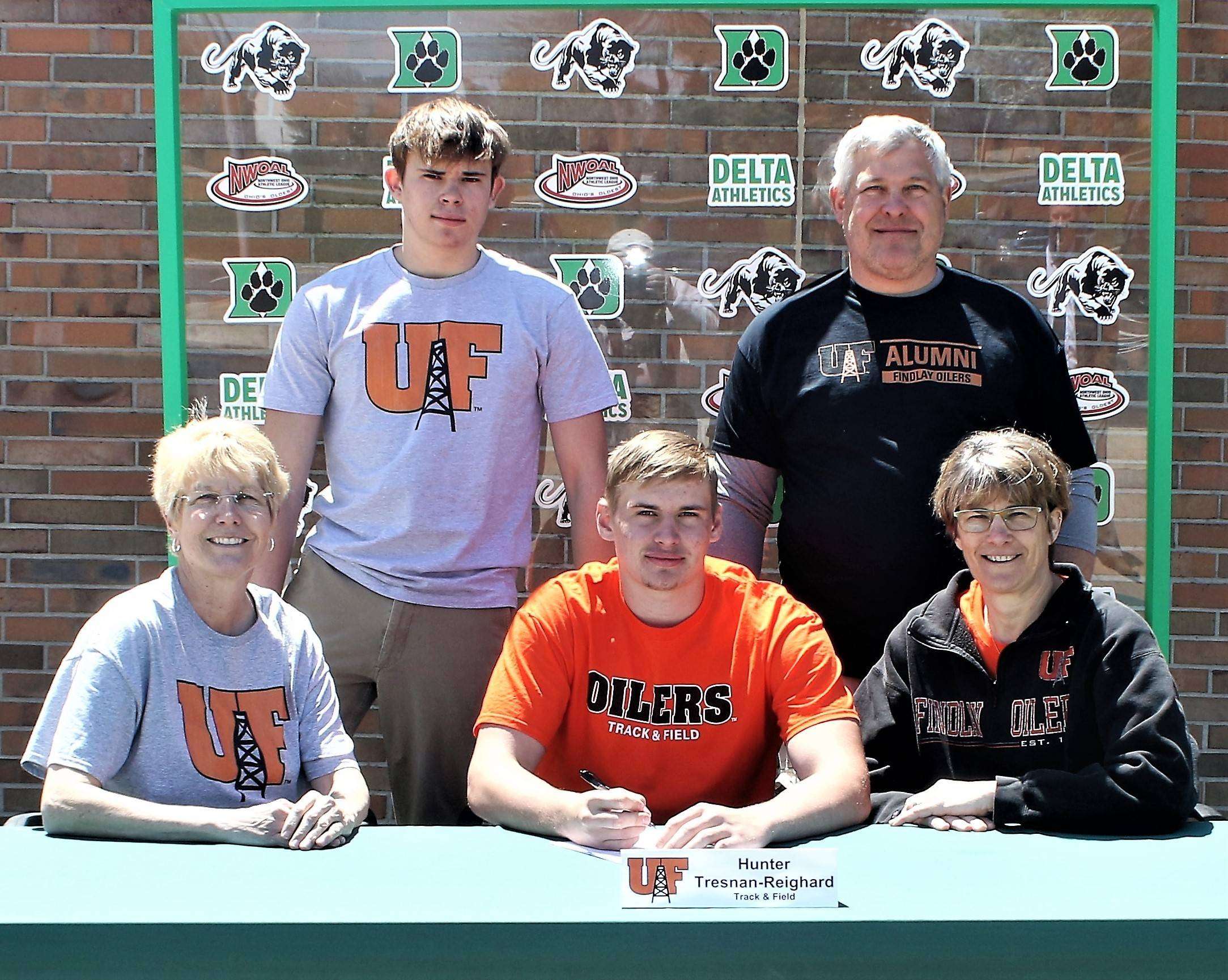 FUTURE OILER … Hunter Tresnan-Reighard signs with the University of Findlay with mother Cheryl Reighard to his right and mother and coach Mary Reighard to his left.  Brother Josh and Uncle/Coach Greg Reighard in the back.

The 2019 NWOAL shot put champion and discus runner-up, Hunter Tresnan-Reighard, has signed a Letter of Intent to continue his education and athletic career at the University of Findlay. Hunter, a multi-sport athlete, also earned All-NWOAL Honors in football and basketball, but decided to stay with track and field where he was twice named All-Ohio in discus and was a state qualifier in the shot put.

He chose Findlay because he said it felt like it was a home away from home.  “It is a smaller college which I wanted, and the atmosphere was inviting and friendly.  Everyone on campus that I met was friendly and open to conversation,” Hunter said further explaining his decision.

Doubly proud of Hunter’s moving on to compete at the next level is his high school coach and his mother, Mary Reighard. Coaching your own child, especially in high school, can make for some interesting dynamics at practice and at home but it all worked out very well.

“We survived and I am very proud of his accomplishments throughout his career, stated Coach Reighard.  “He is a student of the sport.  I will miss him dearly because of his knowledge of the throws. To see him mature and grow not only as a thrower but a teammate was special.”

While competing for the Oilers in the Great Midwest Athletic Conference (G-MAC), Hunter will be majoring in Animal Sciences, a very challenging area of study.  His academic resume, however, says he will be more than ready.  Hunter is a member of the National Honor Society, an NWOAL Scholar Athlete and was named Academic All-Ohio in Track for 2018 and 2019.

The cancellation of all high school spring sports in Ohio has been extremely disappointing for the student-athletes and also from a coach/parent perspective. “Not being able to finish this year has been very tough on him, as I know it has for many other athletes,” lamented Hunter’s mother, Mary.

Unfinished goals are tough when you have the chance to try and reach them.  Not having that chance will be something he and many others will never be able to get back.  I am just glad God has given him the opportunity to not only continue his academic but athletic career at the next level.”

The difference in the level of athletic talent and competition between high school and college is huge, but Hunter has a plan to meet that challenge. “Work hard day in and day out put your time into the weight room in season and especially in the off season. It is the number one thing to do to put yourself ahead of others in strength and speed,” he said.

“In technical events work diligently and frequently to hone your craft.”  Having a coach living in the same house during the off season will certainly help him stick to the plan.