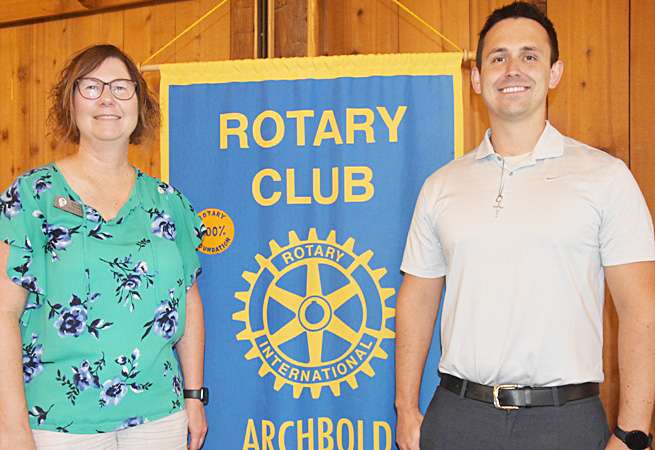 After completing a number of years as a teacher and 13 years as superintendent of the Bryan City Schools, Bryan Rotarian Diana Savage began a new journey in Rotary on July 1 — serving as the district governor of 62 clubs.

District 6600 stretches from the Indiana and Michigan state lines on the west and north to just east of the Cleveland suburbs and south to Mansfield, Lima and St. Marys. Within the next couple of months, she will have completed her official visits to all of the clubs.

While not doing official Rotary business this year, she supervises student teachers for Bowling Green State University and works as the business development director and educational consultant for Beilhartz Architects in Defiance.

On September 7, she visited the Archbold Rotary Club to share the updated vision statement that Rotary International has developed.  Together, we see a world where people unite and take action to create lasting change across the globe, in our communities and in ourselves.

She commended Archbold Rotarians for their rich history of community service — from awarding nearly $9,000 worth of college scholarships every year, supporting the splash pad project in Ruihley Park, helping fund the downtown mural, sponsoring two community meals, and this year’s American flag display program on Memorial Day, Fourth of July and Veterans Day as well as past support for building the Charles Lugbill Rotary Shelter in Woodland Park.

The district governor explained that Rotary District 6600 and Rotary International are ready to support and encourage international projects as well.

She explained that District 6600 has been working on a project to help Saint Vincent, an island state in the southern Caribbean, rebuild infrastructure following a devastating volcanic eruption in 2019 that was followed by hurricane extensive damage to the island.

The district is currently seeking support from the 62 Rotary clubs to provide $100,000 (which includes a grant of $38,000 from an anonymous Rotarian in the district) to install a pump that will provide water for people who live and farm on one of the island’s mountains.

After that project is completed, the district hopes to help with a several education-related projects on the island.