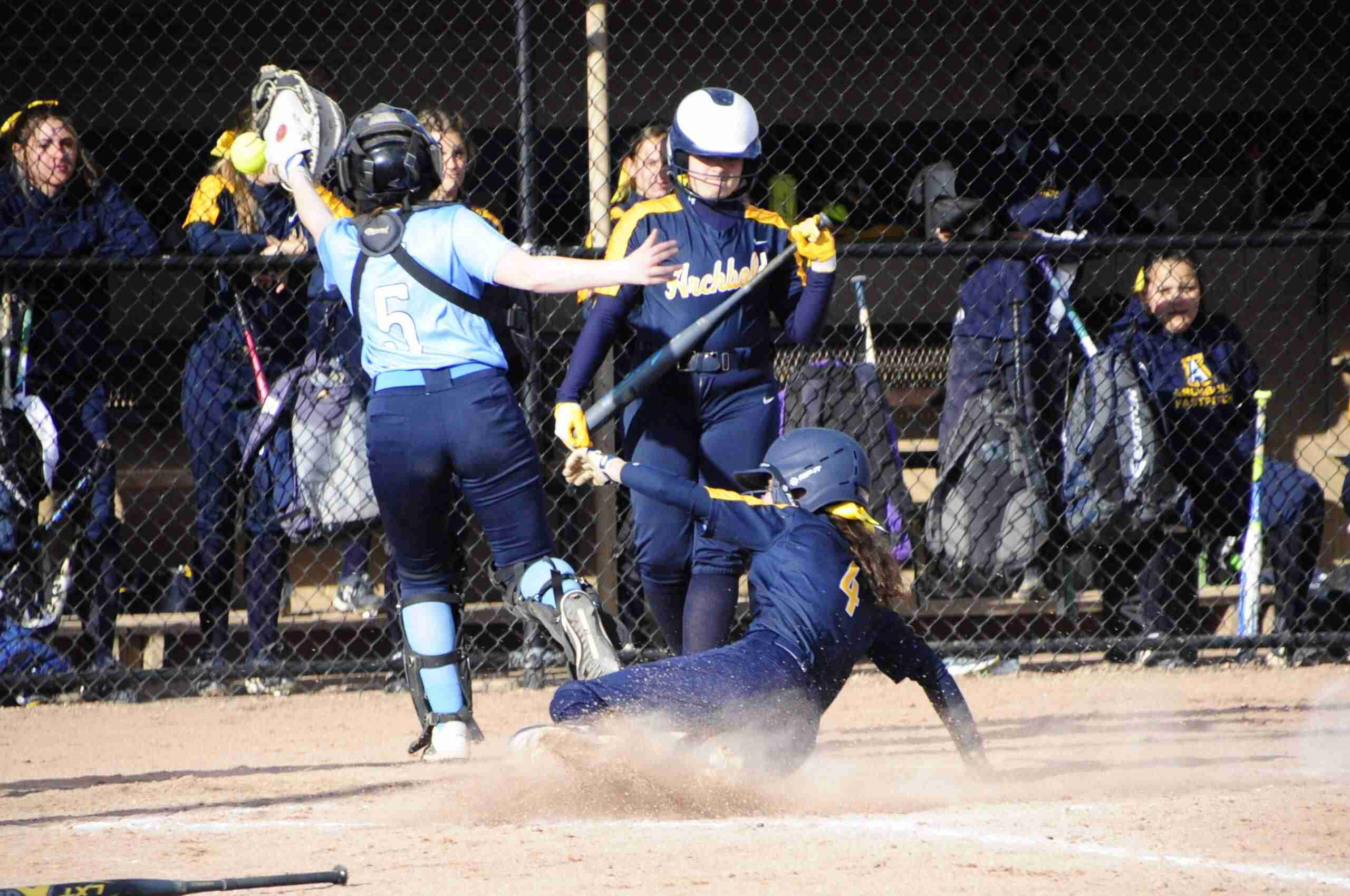 COMEBACK WIN … Archbold pitcher Maddie Thiel scores as the throw to home is off target. Archbold erased an early 4-0 deficit to knock off Montpelier 13-5. (PHOTO BY ANGI SCOTT, STAFF)

ARCHBOLD-It was a perfect start for 12th seeded Montpelier as they jumped on top 4-0 with a first inning grand slam.

From that point on it was all Archbold as they held the Locos to just one run over the final six innings to pull away for a 13-5 win in a Division III sectional semifinal.

Montpelier would get two walks and a single off Archbold starting pitcher Natalie Nofziger to load the bases with one out for Jessi Bumb who sent a 1-1 pitch over the left field fence for a grand slam and a 4-0 Loco lead.

The Bluestreaks would make a pitching change as Maddie Thiel entered the game and she put the first two batters she faced on base with a hit by pitch and then a walk.

Thiel recovered to strikeout the next two Montpelier hitters to keep the score at 4-0.

Archbold would go to work in their half of the frame as Kylie Sauder and Alyssa McCoy singled to get Archbold on the board with Sauder scoring on the McCoy hit.

Carsyn Hagans drew a walk and Addie Ziegler lined an RBI single to right to cut the Montpelier lead in half at 4-2.

With Hagans now at third, Breanna Boysel singled to left to drive in Hagans and make it a 4-3 game.

Archbold would take the lead for good as Lucia Rodriguez reached on an error which allowed Ziegler and Boysel to score to give the Bluestreaks a 5-4 lead.

Archbold added two more runs in the inning as Harley Phillips had an RBI double and Sauder, batting for the second time in the inning, drove in Phillips with an infield single to increase the lead to 7-4.

Archbold tallied two more runs in the second with a single by Hagans, Thiel would reach third base on an error allowing Hagans to score, and then Thiel would score on a wild pitch to make it 9-4.

The score held at 9-4 until the home half of the sixth as Hagans opened the inning with a single and Ziegler doubled to right, scoring Hagans.

Nofziger was next for Archbold with an RBI single, Boysel added an RBI double, and Phillips had an RBI groundout to shortstop to give Archbold a 13-4 lead after six innings.

Thiel shutdown the Montpelier bats as she allowed just one run on one hit while striking out 12.

Ashley Caudill had two singles and a run batted in for Montpelier (6-14) as she and Bumb accounted for the Locos RBIs and hits on the night.

Archbold (10-10), the No. 7 seed in the Maumee District, will travel to No. 2 Eastwood on Friday for the sectional finals.

Be the first to comment on "Division III Softball Sectional Semifinal: Archbold Overcomes Fast Start By Montpelier To Beat Locos 13-5"