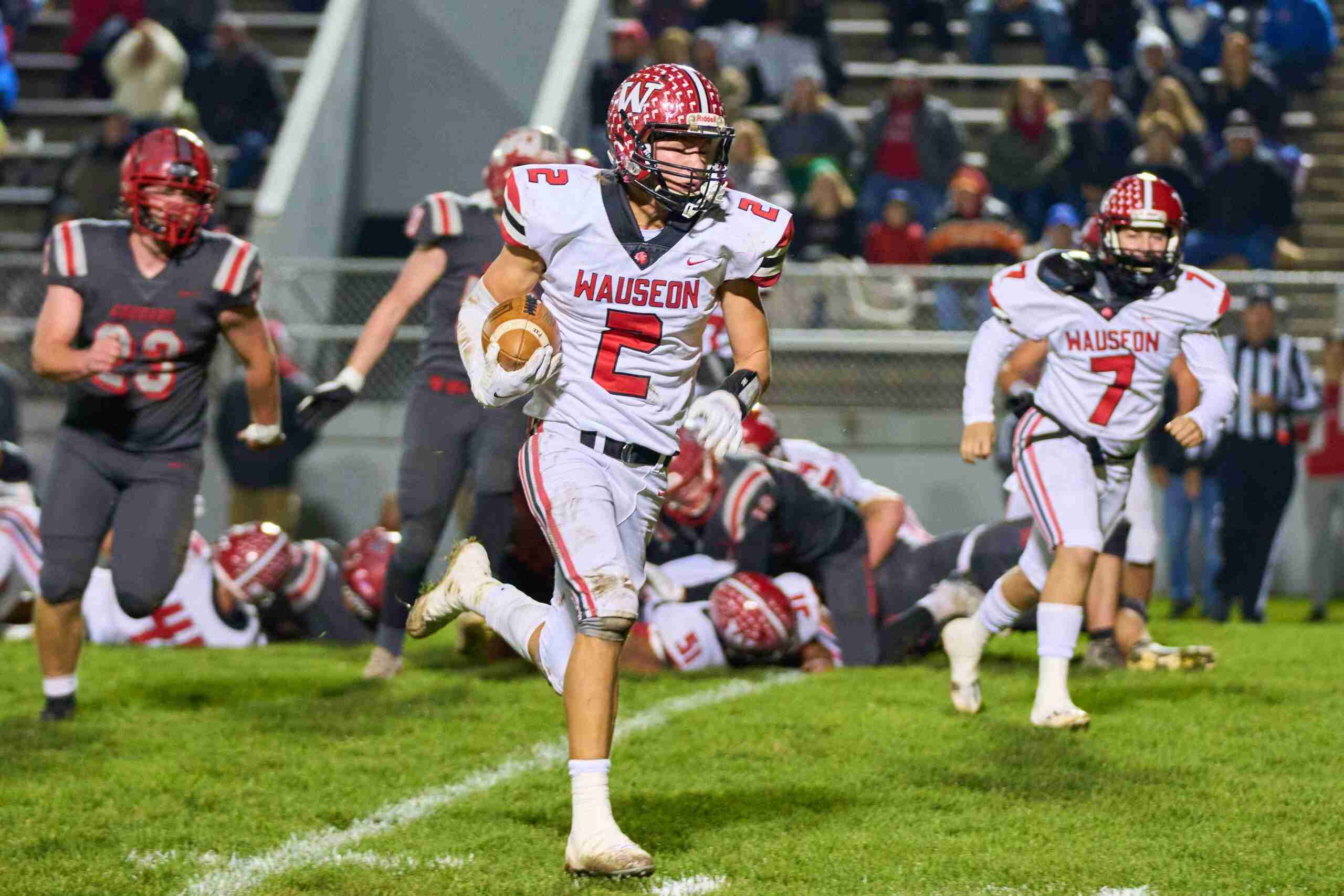 GETTING WAUSEON ON THE BOARD … Senior Jonas Tester breaks away for a 17-yard touchdown run in the first quarter. (PHOTO BY RICH HARDING, STAFF)

VAN WERT – The Cougars showed on Friday night why they are a serious contender to repeat as Division IV state champions.

Van Wert cranked out 480 yards of total offense, forced four Wauseon turnovers, and outscored the Indians 25-7 after halftime to pull away for a 53-20 win in the Division IV Region 14 quarterfinals.

The Cougars high-powered, no huddle offense asserted themselves quickly by taking the opening kickoff and marching down the field on an eight-play, 68-yard drive ending with a two-yard TD run by Nate Jackson to take a 7-0 lead.

Wauseon’s Jonas Tester would return the ensuing kickoff all the way to the Van Wert 37-yard line to give Wauseon great field position for their opening drive.

The Indians were unable to take advantage though as they would eventually turn the ball over on downs after running four plays and gaining -1 yard.

Following a three and out by the Cougars, Wauseon’s second possession ended on their second play of the drive with a Bryson Stump fumble that Van Wert’s Ty Jackson recovered.

Four plays later Jackson scored for the second time in the opening quarter, this one a three-yard run, to give Van Wert a 14-0 advantage at the 5:08 mark.

The Indians responded with the help a pass interference penalty against the Cougars and four straight completions by Elijah McLeod to move the ball to the Van Wert 17-yard line.

Facing a fourth-and-two, the Indians lined up Jonas Tester at quarterback in the Wildcat formation and he would bounce the play to the outside and raced 17 yards for the score to cut the deficit in half at 14-7.

Van Wert found paydirt again early in the second quarter as Maddix Crutchfield took a shovel pass from Pratt and went eight yards for a score on second-and goal to cap off a 57-yard drive and make it 21-7.

The Cougars went on the attack on their next possession with a five-play, 68-yard drive ending with Pratt going to Crutchfield on a screen pass covering 34 yards for a TD to stretch their lead to 28-7.

Once again Wauseon was able to put together a drive to answer the Cougars starting with a 29-yard pass from McLeod to Tyson Rodriguez before two straight passes to Tester covering 30 yards that gave Wauseon a first-and-goal at the five-yard line.

Two plays later, Logan Carroll scored on a five-yard scamper to make the score 28-13 after the missed extra point.

The Indians were then able to force the only Cougar turnover of the night as Tester intercepted a Pratt pass to give the Indians the ball at the Van Wert 37.

The threat ended though as McLeod had a third down pass picked off near the goal line to preserve the 28-13 lead for Van Wert at halftime.

With some momentum on their side, Wauseon received the second half kickoff with a chance to cut into the Cougars lead.

The Van Wert defense was up to the challenge though by recording back-to-back sacks of McLeod and Wauseon was forced to punt after McLeod’s pass on third down was incomplete.

Van Wert was able to get the momentum back with a seven-play, 65-yard drive that was finished off by a 32-yard TD run from Jackson who broke two tackles in the backfield before taking it to the house.

Wauseon once again though was able to answer as they would start their next drive from their own 14-yard line following a personal foul penalty against Wauseon on the kickoff return.

After a short pass to Sam Smith, Carroll ripped off a 72-yard run to give the Indians a first-and-goal at the Cougars seven-yard line.

The Indians eventually had a fourth down at the three-yard line where Wauseon again went to the Wildcat and Tester was able to bull his way into the end zone to make the score 34-20 with 4:39 left in the third quarter.

It was the Cougars turn for a quick answer as they started their next possession at the Wauseon 45-yard line after a long return and another 15-yard personal foul penalty against the Indians.

From there, it was a seven-play, 45-yard drive by Van Wert culminating with Pratt tossing a 22-yard TD strike to his brother Connor Pratt down the right sideline to push their advantage to 40-20.

The turnover bug would hit the Indians in the fourth quarter with McLeod throwing an interception on two consecutive possessions.

The second interception put Van Wert at the Wauseon 25-yard line and Jackson found the goal line on the third play of the drive, a nine-yard run, to make it 47-20 with 7:04 remaining in the game.

Brylen Parker ended the Cougars scoring on the night late in the fourth quarter with a 50-yard touchdown run to increase the lead to 53-20.

Pratt ended the game 22/30 passing for 230 yards and three touchdowns while Jackson led the ground game with 132 yards on 24 carries and four TDs.

Wauseon, who ends the season at 8-4, was topped on offense by McLeod (24/41, 222 yards, three interceptions) and Carroll ran for 78 yards on three attempts.

Van Wert (11-1) will now face Clyde (10-2) next Friday in the regional semifinals in a matchup of the last two state champions in Division IV.