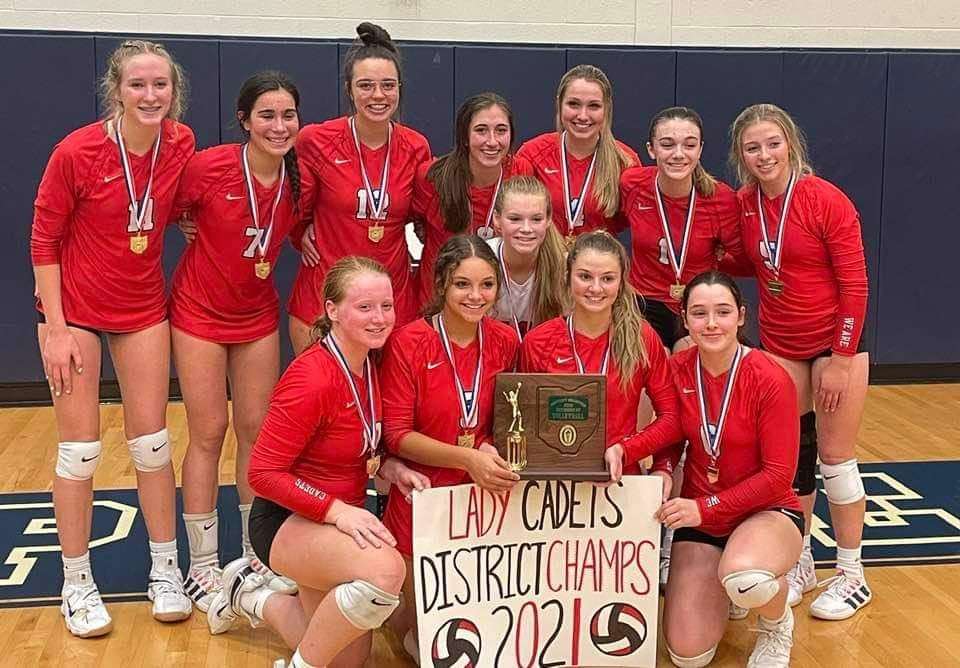 NAPOLEON – After falling in the district finals last year, Hilltop would not be denied this time as they took down Hicksville in straight sets 25-21, 25-23, 25-12 at the Grand Canyon for their first district title since 1994.

It was a solid start for the No. 3 seed Hicksville by jumping out to a 4-1 lead before Hilltop rattled of four straight points to go ahead 5-4.

Top seeded Hilltop would then end the set by outscoring Hicksville 8-4 with the set winning point coming on a serving error by the Aces.

The second set saw Hicksville dig themselves an early hole by falling behind 7-1 before back-to-back errors by Hilltop trimmed the Cadets advantage to 7-3.

A Hicksville kill made it 20-18 before Hilltop’s Libbie Baker had a kill and a block and after a serving error by the Aces the set was tied again, this time 21-21.

Hilltop then ended the set with a 4-2 spurt helped by an ace from Ray Stevens and kill from Jayma Bailey to take a commanding 2-0 lead.

Hilltop controlled the third set from start to finish getting two blocks from Baker and a pair of kills by Gabby Rodriguez to take an 8-1 lead. Hicksville closed the deficit to 10-5, before the Cadets ripped off a 9-2 run to stretch their lead to 19-7.

From that point Rodriguez added four more kills and Baker recorded match point with a block, the same as she did in the district semifinal win over North Central.

Defending state champion Tiffin Calvert (22-3) will be Hilltop’s (20-5) opponent in the regional semifinals at Elida on Thursday with the match set for a 7:30 p.m. start time.