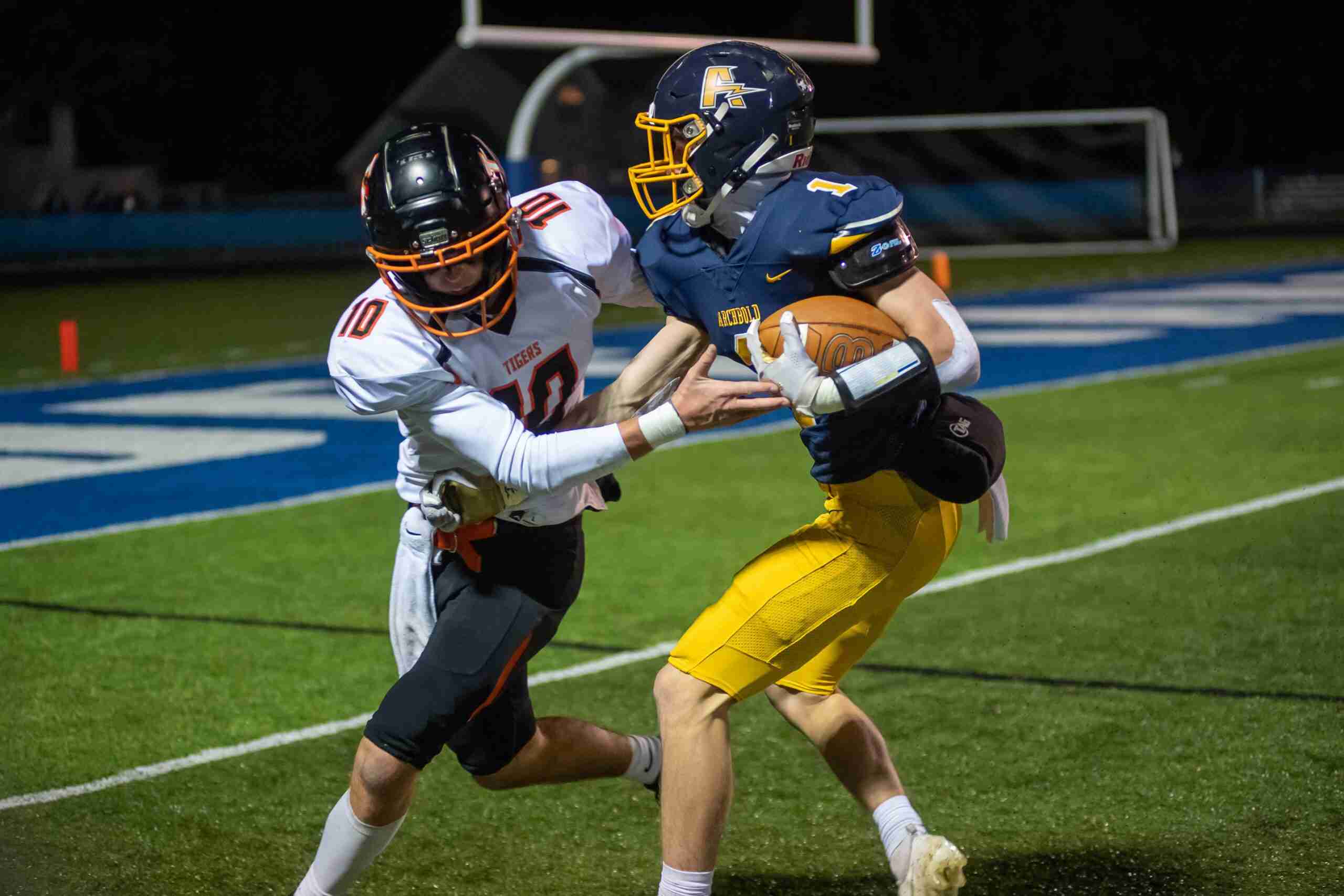 FIGHTING TO THE END ZONE … Gavin Bailey slips a tackle as he scores a first quarter touchdown for the Bluestreaks. (PHOTO BY JACOB KESSLER, STAFF)

DEFIANCE – Carly Roth etched her name into Liberty Center football history with a kick that will be talked about for decades. The senior drilled a 27-yard field goal as time expired to lift the Tigers past No. 1 seed Archbold 38-35, dealing the Bluestreaks their only loss of the season and capping off a wild fourth quarter.

Early on, it was clear this contest was going to be much different than the first meeting, a 41-7 Archbold win back on September 17th.

The Streaks rolled the dice on their opening by going for it on fourth-and-four from their own 33-yard line, DJ Newman was stopped on a quarterback keeper giving the Tigers great field position.

Liberty Center moved quickly needing six plays to go 34 yards ending with a six-yard TD run by Teejay Moore on fourth-and-goal to give the Tigers a 7-0 lead.

Archbold’s next possession resulted in a loss of 16 yards as Newman was sacked on third down and after the Bluestreaks punt, the Tigers had the ball near midfield.

Once again, the Tigers used the ground game to move the ball down the eight-yard line where they had a first-and-goal. From there, Zane Zeiter found the goal line on a designed quarterback run to make it 14-0 with 2:20 left in the first quarter.

The first play after the penalty, Newman found Gavin Bailey on a screen pass which he took 47 yards to paydirt to get Archbold on the board.

Following an exchange of punts, the Tigers went to the air for the first time has Zeiter went 25 yards to Riley Chapa and then Moore ripped off a 34-yard carry to put the Tigers at the Archbold 12-yard line.

Facing another fourth down situation at the seven-yard line, Zeiter tossed a pass to Evan Conrad for the score and pushing the Tiger lead to 21-7.

With Archbold having a hard time running the ball, the Bluestreaks used the passing to overcome a LC sack and an offensive holding penalty as Newman went for 15 yards to Jack Hurst and 28 yards to Bailey.

After three straight runs by Newman, Carson Dominique had back-to-back carries, the last one a six-yard run to the end zone to cut the LC lead to 21-14 heading to halftime.

The third quarter opened with a vintage Liberty Center drive by going 88 yards in 13 plays, all runs, using over 7:00 of the clock resulting in a Zeiter quarterback sneak for a TD to make it 28-14.

Archbold would go three and out on their next possession, but after a short punt by LC on their ensuing possession, the Streaks had the ball at the 37-yard line of the Tigers as the game headed to a fourth quarter that saw the teams combine to score 31 points.

The final quarter didn’t start like the Bluestreaks wanted as they were faced with a 3rd down and 17 at the LC 49 following an offensive holding penalty.

With Tiger defenders closing in Newman dumped off a screen pass to Karter Behnfeldt who scampered 49 yards for the score to trim the deficit to 28-21 just thirty seconds into the fourth quarter.

Struggling to stop the Tiger running game through the first three quarters, Archbold head coach David Dominique opted to try an onside kick following the score which was recovered by Landen Kruse of Liberty Center.

The Tigers would methodically move the ball on the ground, taking almost 5:00 off the clock ending with a 32-yard touchdown run by Moore to give the Tigers a 35-21 lead with 6:32 to go.

Archbold went to a hurry up offense on their next drive and after a combination of Newman runs and a 29-yard completion to Hunter-Cullen Lemley they were at the LC 14-yard line.

Newman then connected with Bailey on a 14-yard TD pass to bring Archbold back to within seven points at 35-28.

That setup another Archbold onside kick in which the Bluestreaks kicked the opposition direction of the first attempt and the Bluestreaks recovered at the Tigers 47-yard line at the 4:37 mark of the fourth quarter.

After a false start penalty backed the Streaks to their own 48, Newman rolled to his right on first down and found a streaking Bailey down the right sideline for a 52-yard TD to tie the game at 35-35.

The game winning drive for the Tigers started at their own 20-yard line and after six plays including passes of 12 and 20 yards by Zeiter to Conrad, the ball was at the Archbold 44 with 1:41 to go.

Moore would gain 22 yards on the next play to move the Tigers into field goal range. Moore then carried the ball on the next three plays, gaining another 12 yards and getting the ball to the center of the field to setup Roth for her field goal attempt with 3.6 seconds remaining.

Liberty Center dominated the line of scrimmage as they outrushed Archbold 309-49 and led the time of possession 33:55-14:05.

Moore led the Tigers with 143 yards on 18 carries and two touchdowns.

Newman ended the night 12/18 passing for 265 and four TDs and rushed for 47 yards on 14 attempts. Bailey paced the Bluestreak receivers with seven catches for 163 yards and three touchdowns.