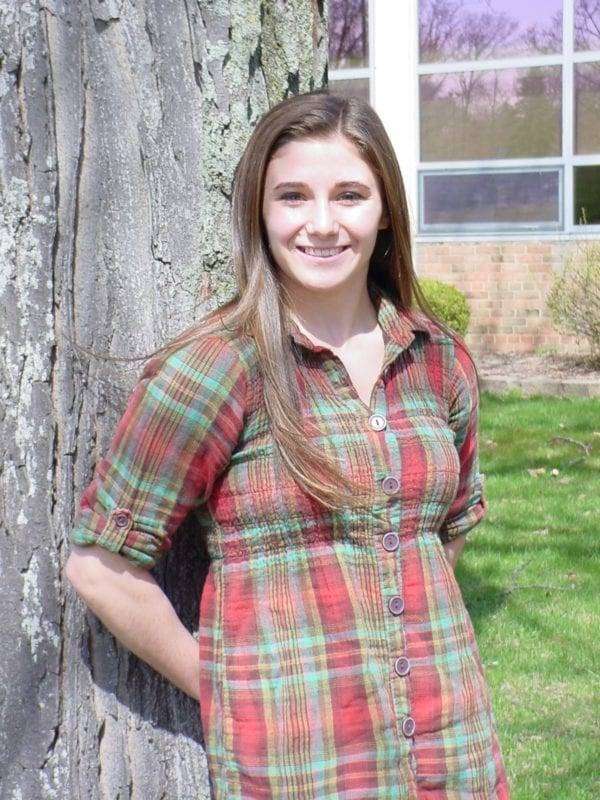 The daughter of Vance and Christi Campbell, and the sibling of Doug, Sarah, Gage, Rylee and Caiden, McKayla is completing her senior year in Wauseon High School. She is a four-year letter winner with the Wauseon Wrestling team. Because there is no OHSAA sanctioned girls wrestling season, McKayla has never grappled against a girl at the junior high or Varsity levels, including at the conference championship level. That championship means a lot to her, “But I think that it means more to girls that are coming into wrestling,” she said. “That was a big goal of mine to fulfill. I pushed myself to the limit, trying to be the best that I could be. I do that in whatever I’m doing. This way, the little girls can look at it and say, ‘Yeah…she can do it, so I can do it too.’”

Stating that she has been wrestling most of her life is not an exaggeration by any means. McKayla started when she was four, and even then only after meeting the criteria established by her father. “I started when I was four, because that’s when my brother joined when he was five…but my dad said no. I asked again next year when I was five, and he said no again. I told him that I could take my brother down, and he made me prove it. I took him down eight out of ten times.” A future champion had put on her first exhibition, but even though she convinced her father to give her a shot, he wasn’t going to let her walk into the arena without strong words of fatherly advice and guidance. “He gave me a speech about how I had to be tough,” she said. “I wasn’t allowed to cry. There were going to be people who didn’t want me there. I wasn’t allowed to quit until the season was over, so I had to wait until after the season to decide if I wanted to do it or do something else. In my first year, I won Novice State with the boys. I was only like 37 pounds…I was really tiny.”

Six year old McKayla Campbell had gained her first title, and she was not about to slow down. “I wrestled with the Tomahawk Wrestling Club up until the seventh grade, then I started wrestling with the school.”

McKayla also began working with the Shore Things Girls’ Wrestling Club. In the process, she went beyond the state title domain, and began working on the national level. “They’re down in St. Paris,” she said. “My coach is George Shore. I really like him. His son wrestles, and so does his daughter. He just started up a program for all these little girls that don’t have a team. There weren’t that many when he started it…maybe five or six. Now I go there and see all these little girls running around, and I think it’s crazy. When I was there, there was just a few of us. I like it there; they know where the girls are coming from, and what they’re going through. When you’re working with the girls, they all know what you’re going through, because they have to wrestle on the boys’ team too. There’s a lot that you have to beat, and they know it’s hard. You have to beat testosterone. You have to beat different coaches and different referees. You have the wrestlers on other teams that don’t want to wrestle you. If you wrestle a girl and win, you’re told that she’s just a girl. If you wrestle a girl and lose, your whole team is going to pick on you. It’s lose-lose for a guy. Then you get old school coaches that don’t want you there because they think it’s a sport just for boys. It used to be that most of the refs didn’t like girls out there at all, but now with more girls coming through, they’re seeing the potential. It’s getting better as time goes on with people not wanting you there. You still get the select few, but it’s getting better.” McKayla has seen a lot over the years…the sign of a true pioneer.
Upon graduation, McKayla will be attending Campbellsville University in Kentucky on a full ride scholarship. She wants to major in education, focusing on younger kids…and she wants to go into coaching. As one who has seen it all while coming up through the ranks, her coaching credentials will be impeccable. “Whatever you want to do, don’t look at it as something that you can’t do,” she says. “You can do anything anyone else can do. Whether it’s what boys or girls are doing…it doesn’t matter. If you want to go box…go box. I know girls that box. If you want to cheerlead…you can do that too. It doesn’t matter what you choose. Go do it, have fun with it, and don’t let anybody tell you that you can’t be there, or shouldn’t be there. They’re just trying to hold you down.”

By the way…about that trip to the Oklahoma Nationals that McKayla just returned from. She was placed in a bracket with 45 other girls. Against the toughest and biggest competition that she has ever faced at this level, McKayla Campbell put another championship on her already stellar résumé. An OWA title at age six, a total of four more at Nationals, and the NWOAL crown. There’s six championships for someone who has yet to graduate high school, and who has had to deal with societal pressures on top of those of the sport. Campbellsville University is picking up the blue chip of blue chip prospects in McKayla Campbell, and there might be quite a few underclass guys in the 113 pound weight class who would be glad to help her pack her bags.