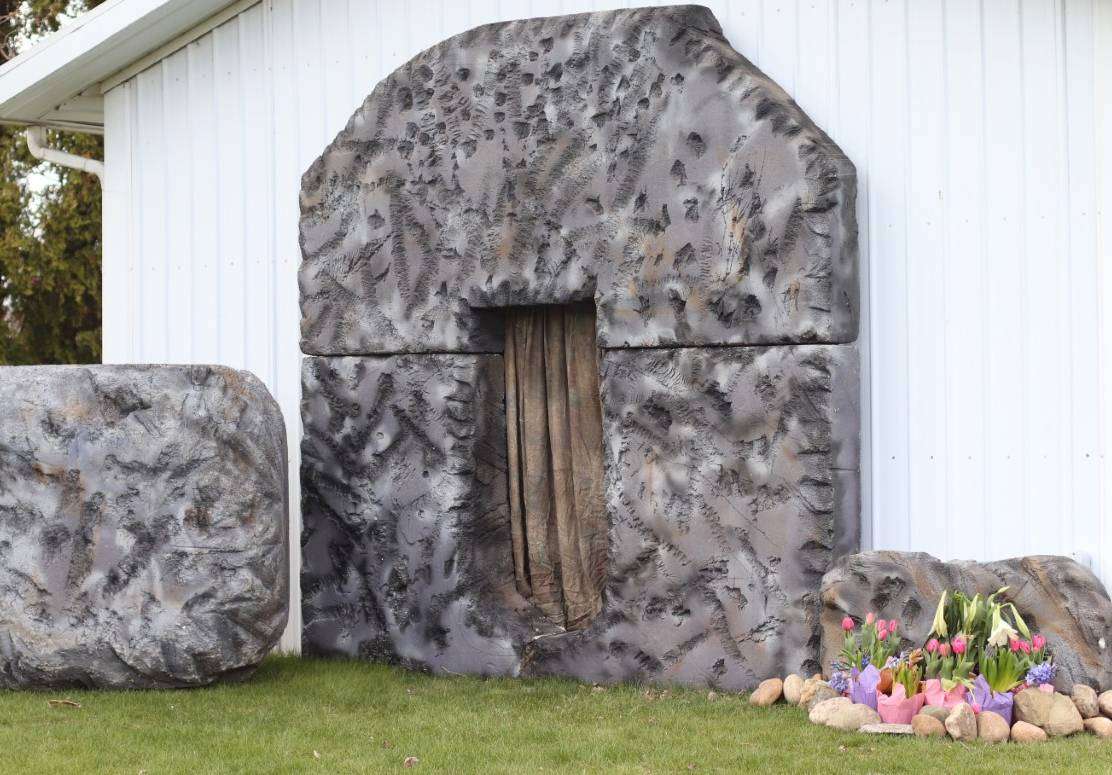 “Jesus is Risen!” “He is risen, indeed!” This greeting, shared in many churches across the world on Easter Morning each year, between believers in Jesus Christ, was brought to life by a creative Scavenger Hunt in the Archbold, Stryker area this past week.

During April 1-4, 2021, carloads of people, seeking an opportunity to think about the meaning of Easter, or to discuss it with their family, followed a map to locate specific items listed in Scripture that tell the account of Christ’s last week on this earth in human form.

Holy Week, as some refer to it, is the week celebrated each Spring, in which Christians celebrate the foundation of Christianity, in which Christ ate his last meal, was arrested, crucified, died and rose again from the tomb where he was buried.

The “Trail of Easter” was devised to give people a safe way to experience the story of Easter from their vehicles, during this second Easter spent with the covid pandemic that has changed the way we do almost everything.

Lockport Mennonite church hosted the hunt, with the map taking participants to different locations where objects, relating to the Easter story, were placed randomly in yards.

Drivers were advised to use their four way lights when necessary, as they drove slowly past, discovering the items listed on the Trail of Easter printout that was included as a flyer in local newspapers and shared on the Lockport FaceBook page.

Everyone was asked to stay in their vehicles and respect the properties where items were placed.

As a part of the map, some well written words led those who chose to enjoy this event, in a present tense explanation of the Holy Week. “Follow along as we make our way back through the Holy Week, where Christ is preparing to make the final sacrifice for all mankind.”

“As Jesus enters into Jerusalem, we hear the people shouting, “Hosanna, blessed is the King who comes in the name of the Lord;” only to have them turn against him later, shouting, “Crucify him!”
The week takes many twists and turns as Jesus moves toward his final hours on earth.

He accepts the will of his Heavenly Father and continues to teach and prepare his followers for what is about to happen. All the while, the religious leaders plot against him.

Even his most faithful followers turn their back on him. Jesus, knowing this would happen, gave himself into the hands of his aggressors and offered his blood and his body as a sacrifice for all humanity.

As he hung on the cross, he suffered the penalty for all sin, even though he himself was without sin. It is sin and brokenness that separates us from God. But God’s desire is for all people to come back to him. For this reason he sent his Son into the world. 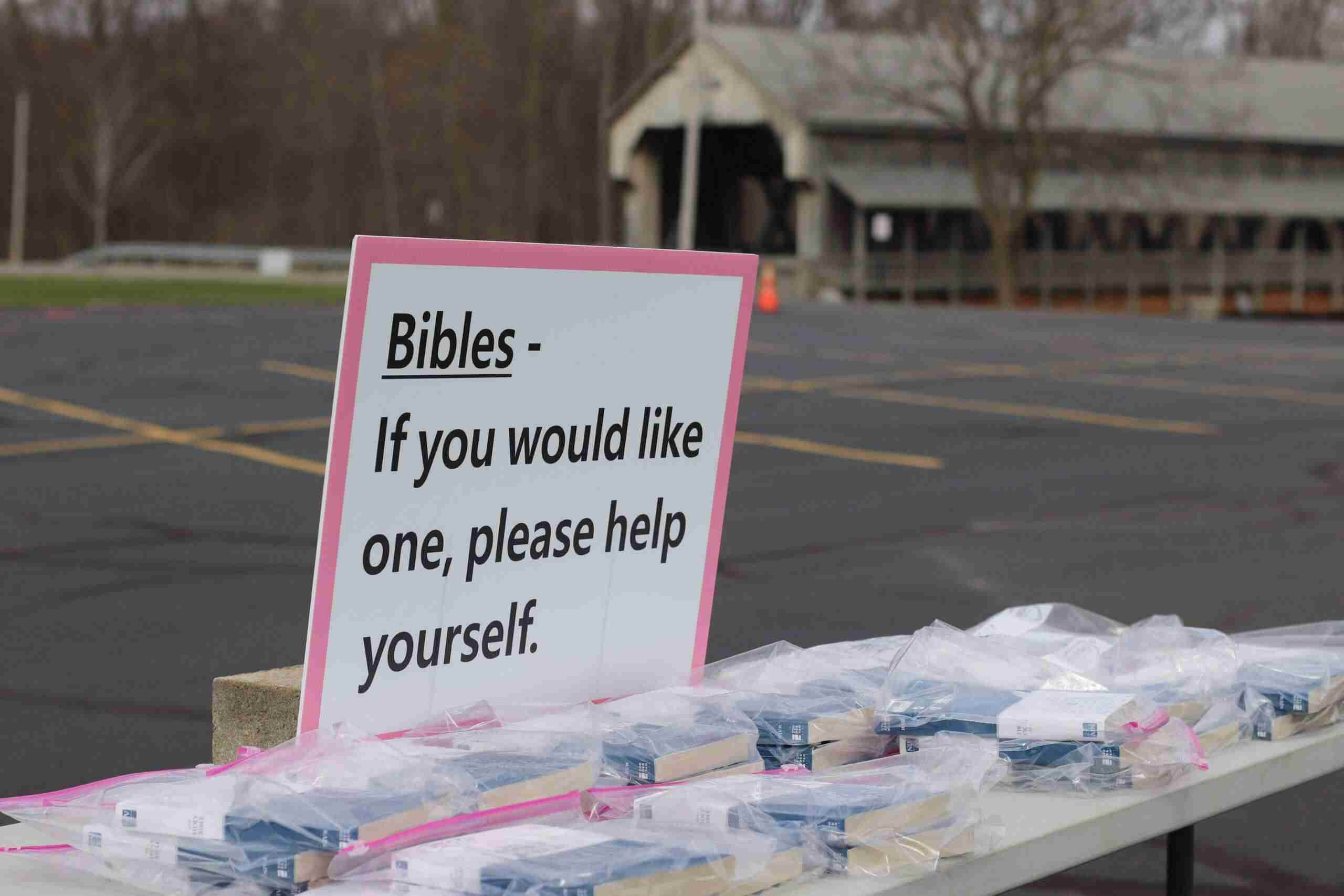 Jesus was willing to pay the price for our sin and brokenness so that we can be reunited with our Heavenly Father and, one day, live with him for all eternity. When Jesus hung on the cross, and before he took his final breath, Jesus said, “It is finished.”

At that very moment, the curtain to the room called the Holy of Holies where God was known to reside, and only the high priest was allowed to enter once a year for atonement but could never look at God’s face, tore from the top to the bottom as a sign that Jesus made it possible so anyone could enter God’s presence through Jesus Christ. The choice is ours as to whether we accept it or not.

Jesus didn’t stay dead. On the third day after his death on the cross, he arose from the grave, just as he had said he would. He presented himself to hundreds of people before he went back to heaven.

Jesus said that he was going to prepare a place for us in heaven and that one day he will return again to take all of his followers with him.

Whether you have heard this a thousand times or whether this is your first time hearing, this is our reason to celebrate! Please join us as we recall the story of Easter as we make our way through the ‘Trail of Easter!’’

Along with a list of items at the ten places involved in The Trail of Easter, were scripture references for participants to look up in their Bibles or on their iPhones, to read while letting their eyes scan the landscape looking for things like a water basin and towel, or a lamb.

One could tell that the families involved in setting up this hunt, enjoyed themselves as they chose where to place the items and how to best give participants a fun experience.

The trail was well marked with signs not only at the homes where the items were found, but with arrows directing where to turn, and warning signs to please slow down placed before each of the participating places.

The objects and scripture verses were as follows:

Many of the items were relatively easy to sight, such as the dice under a bush, or the armor creatively placed in the grape arbor, but others such as the imprint of the kiss or the crown of thorns were harder to locate, and some may not have been able to find everything on the list.

Lockport Church, which is located at 9269 County Road 21/N, near Stryker, was the last place on the Trail of Easter and did a great job of drawing it all together.

After seeing the empty tomb, viewers were also shown a cross lying on the ground, built like a planter, and filled with broken glass, symbolizing our lives before meeting Christ, who was broken for us.

The trail ended with two gifts which could be taken, one a children’s book about the gospel and the other a Bible. They were conveniently located and placed in such a way as to protect them from the weather.

Contact Information for assistance was given on a sign at the end, inviting anyone, who would like to meet Christ in person, to call Pastor Steve Heatwole or Pastor Matt Weaver at 419-682-1831. 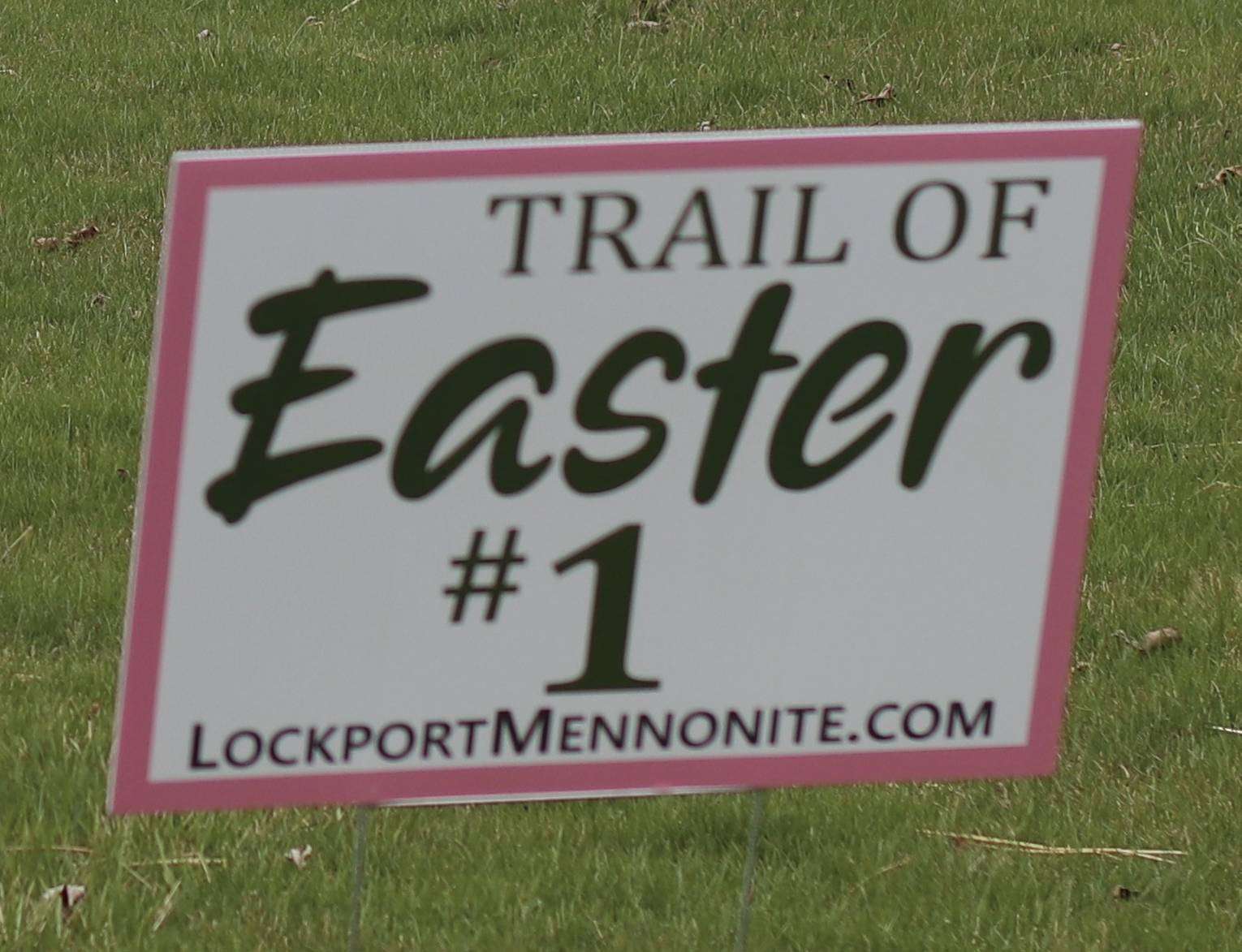 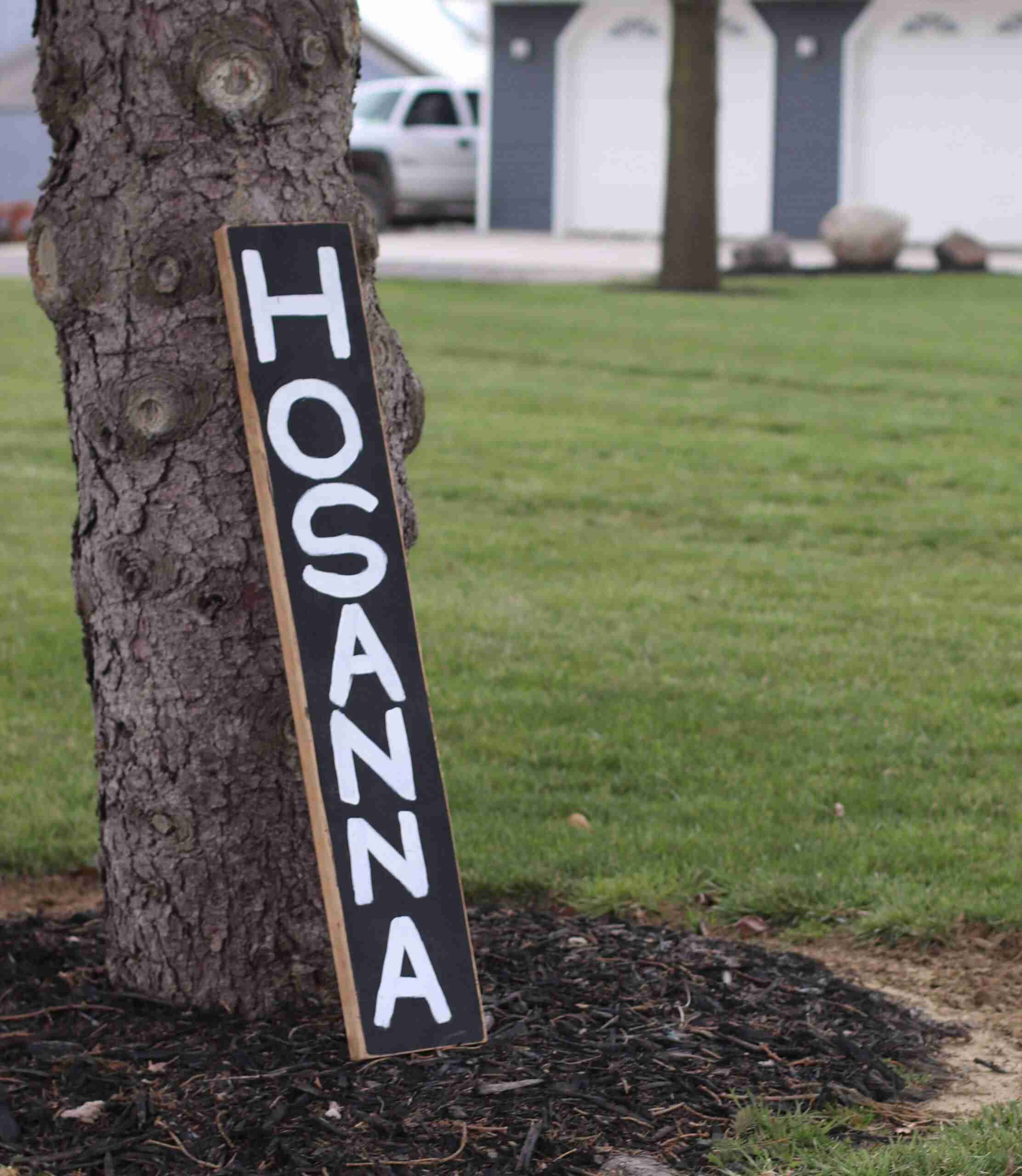 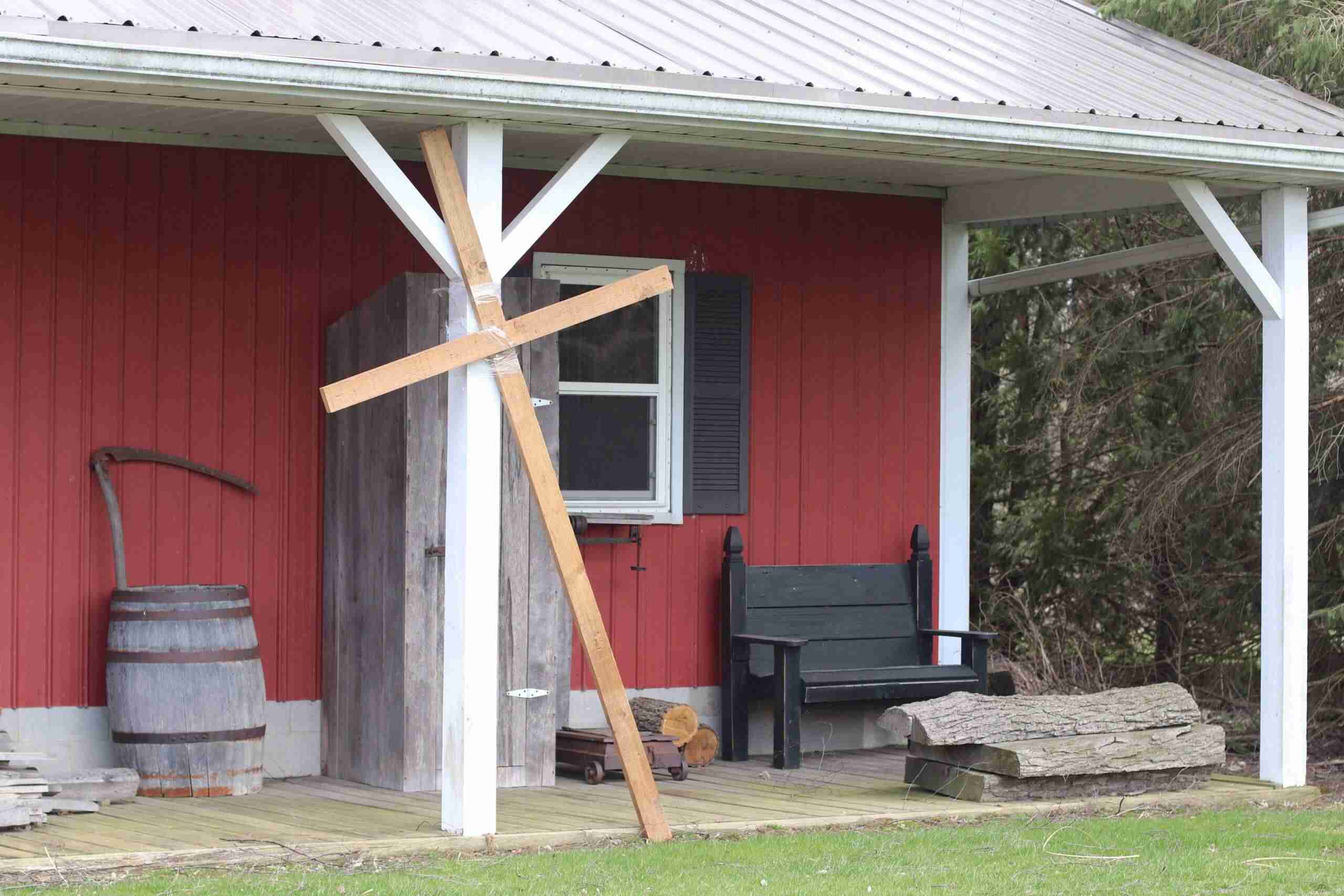 Rebecca can be reached at publisher @thevillagereporter.com