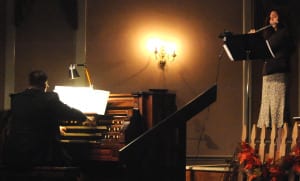 By T.J. Hug
THE VILLAGE REPORTER

The historic Fayette Opera House’s Ginnivan Auditorium played host to a dynamic concert on Sunday, as the husband and wife combination of the Ebies came to town as part of the Glasgow Reed Organ Series.

The Glasgow Reed Organ Series, named after Don Glasgow, a man who became one of the world’s leading experts on reed organ restoration by taking on a project to fill his time during retirement. The organ he set out to restore was to be quite a challenge, however, as it took him three years to “pumped new life” into an 1890s Mason and Hamlin three keyboard reed organ, which just happened to belong to the Fayette Opera House.

That very Mason and Hamlin was featured prominently in the performance of Brian Ebie at Sunday afternoon’s concert. Working an intricate series of pedals in addition to the three levels of keys, Ebie intricately manipulated the complex machine as he played iconic hymns during his tribute to Thanksgiving.

Ebie wasn’t alone throughout the show, though. For a majority of the time, his wife Laura accompanied him on her flute, creating a beautifully harmonious sound which echoed off the walls of the Opera House. She also played a duet with him on a different organ, and sang a gorgeous rendition of “Bless This House” in a traditional opera performance, varying between degrees of softness and power.

In total, the two artists played twelve songs, with an intermission taking place in the middle. The theme of the concert was “Songs of Thanksgiving.” Some of the more familiar pieces played include “Now Thank We All Our God” and “‘Tis the Gift to be Simple.” Brian masterfully handled three separate organs over the course of his routine.

Both Ebies, husband and wife, have exceptionally strong backgrounds in music. Brian holds both a bachelors and a masters degree in education and music performance from The University of Akron. He has played world premieres of organ works at the American Guild of Organists Convention and played recitals nationally. A personal highlight for him, however, was having the privilege of playing the 206-rank Aeolian-Skinner pipe organ located at the Mormon Tabernacle in Salt Lake City, Utah.

Laura studied flute performance while attending both Brigham Young Univerity and The University of Arizona. She plays the flute professionally, and even has her own teaching studio.

Oh, and both of them are vice-presidents of the respective companies for which they work; Brian at Hamrick Manufacturing and Laura at MEDIC International, a non-profit organization.

After the concert, a reception was held in the lobby. Apple Cider and cookies were served. The Opera House expressed a need for more volunteers so that this tradition could continue.

The Opera House will host its next concert on December 7, at 3:00 P.M. with the program “A Bean Creek Christmas.”