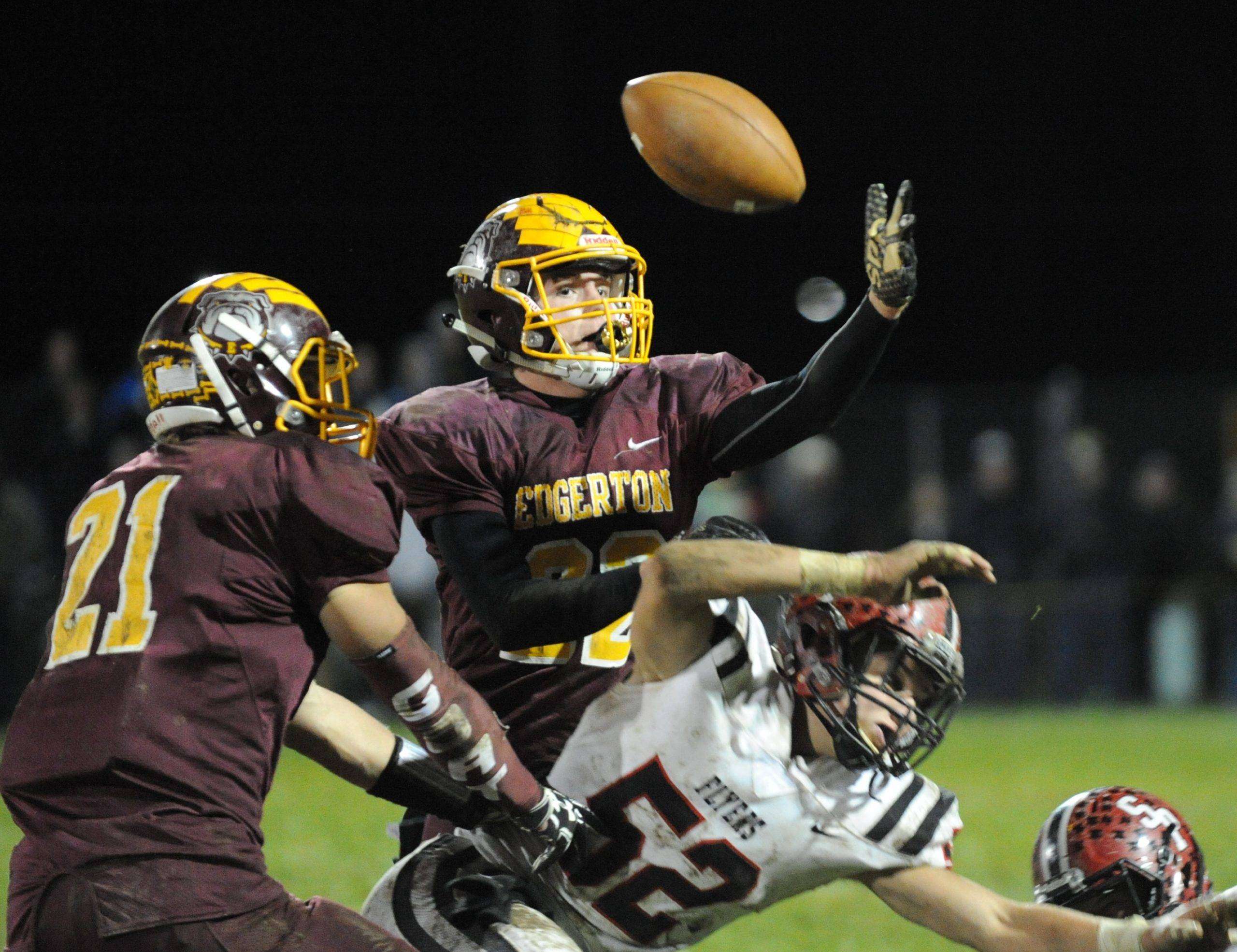 EDGERTON – On paper the Division VII Region 26 Quarterfinal Playoff Game between Edgerton and Norwalk St. Paul appeared that a winner would not be decided until the very end.

In a match-up of near mirror images, both teams entered the contest with potent running attacks, and stingy defenses. However, the Bulldogs took control from the opening kickoff, and never looked back en route to a 36-0 destruction of the Flyers, and the first playoff victory in the history of Edgerton football!

After a short kick return, the Edgerton offense went in action at their 29-yard line. Five running plays and 45 yards later the Bulldogs had advanced the ball to the Flyers 26. Edgerton put their first six points on the board the next play when quarterback Clayton Flegal hit Braydon Cape in the end zone.

Hunter Prince ran in the 2 point conversion to put the Bulldogs up 8-0, with just 2:06 off the clock. The Flyers were unable to get anything going on offense and were quickly forced to punt the ball back to Edgerton. This time the Bulldogs possession began at their 30 yard line. Once again the Bulldogs needed little time to march the 70 yards.

Prince fueled the drive carrying the ball 5 times gaining 34 yards, including a 5 yard TD run. On the PAT, Flegal completed a pass to Greg Roth, but he was stopped just short. With 5:44 left in the opening quarter, Edgerton was in control 14-0. Starting on their 29-yard line, the Flyers need just two plays to advance the ball deep into Edgerton territory. A pass completion accounted for 58 yards.

However, a sack by Brody Degryse resulted in a loss of 11 yards moving the ball back to the Edgerton 37, and a delay of game penalty sent St. Paul back five more yards. Another completion on a miraculous catch got the Flyers to the Edgerton 23.

However, facing fourth and five, the pass attempt to the end zone fell incomplete. With 2:08 still remaining in the 1st period, the Bulldog offense was back in business. On this possession ran the ball seven times, and had one pass completion from Flegal to Cape to cover the 77 yards.

Once again Prince found pay dirt, this time on a 32 yard touchdown run down the visitor’s sideline while high stepping in the end zone! Cape converted the 2 point conversion on a reverse to the right side. As 11:12 was left before halftime, the Bulldogs extended the lead to 22-0.

Obviously shell-shocked by the events of the first 13 minutes of the contest, St. Paul’s offensive possession began at their 33. Facing a third and seven, any hopes of a sustained drive were abruptly halted when Eli Branham beat his blocker and drove the Flyers quarterback to the turf for a sack and an 11 yard loss.

Another punt by St. Paul gave Edgerton the ball at their 42-yard line with 8:42 left in the half. The Bulldogs needed just three running plays, and 39 seconds to add to the demolition. Prince added his third touchdown of the night, this time taking the handoff from Flegal and sprinting 44 yards right past the Edgerton sideline and stands for the score!

The reverse to Cape was once again good for the PAT, and with just over 8 minutes remaining until intermission, everyone in attendance had to be shocked by the 30-0 Bulldog lead. The Edgerton defense once again held the Flyer offense in check. This time the drive was stopped when Cape made an incredible interception as the ball bounced off the foot of the Flyers Cam Cazzio and into his hands.

Starting at their 30 yard line, for the first possession of the night the Bulldogs were forced to punt. However, the good news didn’t last long for the Flyers as Cape’s punt came to rest at the St. Paul 14 yard line.

Prince added three yards, then the reverse to Cape paid dividends again, this time resulting in a five yard TD as just 44 seconds remained. Prince was stopped short on the 2 point attempt, but the game appeared to be decided prior to halftime as the Bulldogs extended the lead to 36-0.

With just 39 seconds left, the Flyers had one last try to get something positive going. Any thoughts of that quickly vanished as Michah Ritter broke through the left side and rode quarterback Jake Griffin to the ground, while also causing a fumble. Although St. Paul recovered the ball, it was all the way back at the 19-yard line.

Head Coach, John Livengood must have decided enough was enough as the Flyers let the remaining seconds tick off the clock. If the numbers on the scoreboard weren’t enough to show the domination by the Bulldogs, the statistics certainly confirmed the score.

Edgerton amassed an amazing 331 yards of total offense, and was well balanced gaining 232 yards on the ground and 99 in the air. Prince’s led the way picking up 153 of the Bulldogs rushing yards. Conversely, the high powered Flyer running game was limited to just 41 rushing yards, but did have 118 passing.

Per OHSSA rules, due to the Bulldog lead of over 30 points, the second half was played with a running clock. With that regulation enforced, the second half seemed to take only minutes. While Edgerton was unable to add any more points to the total, the Flyers were held in check as well.

In their first possession they did advance the ball all the way to the Bulldog 3 yard line. However, two incomplete passes, the last one in the end zone on fourth down, laid to rest any opportunity to avoid the shutout. The final stats just confirmed the total domination by the Bulldogs.

The home team gained a total of 451 yards on the night, including 339 yards rushing and 112 passing. Once again Prince had a huge game gaining 217 yards on 24 carries including three touchdowns, and a two-point score.

For the season Prince is just 9 yards shy of 2000. Braydon Cape added 8 attempts for 63 yards, a touchdown, and a pair of two-point conversions. Greg Roth had 7 carries for 50 yards, while quarterbacks Flegal and Jaron Cape had four carries for four yards, and one attempt for 5 yards respectively.

The quarterbacks also had a great night throwing the ball. Flegal completed four of six passes for 99 yards, and Cape completed his only attempt for 13 yards. Bradyon Cape led the receivers with 3 catches, for 47 yards and a touchdown. Logan Showalter hauled in the other two completions for 65 yards.

The Edgerton defense more than rose to the occasion limiting the potent Flyer offense, which included two 1000 yard rushers, and was averaging close to 300 rushing yards per game, to just 219 yards total. Only 10 of those yards were gained on the ground. The Bulldog “D” also registered 5 quarterback sacks.

Up next for second seeded Edgerton will be the Pandora-Gilboa Rockets. The Rockets, who are the sixth seeded team in Region 26, knocked off number three seed Tiffin Calvert 33-7. Something will have to give in the contest as both teams come in with perfect 11-0 records.

Both are offensive and defensive juggernauts as well. Edgerton averages 52 points per game and Pandora 42. Defensively the Bulldogs give up just 6 points per contest, with 5 shut outs, while the Rockets allow 6.5 ppg, and have held 4 opponents scoreless.

The game will be held at Defiance High School’s Fred Brown Stadium. Kickoff is set for 7 pm on Saturday, November 10.

Be the first to comment on "Edgerton Dominates St. Paul To Register 1st Ever Playoff Victory"