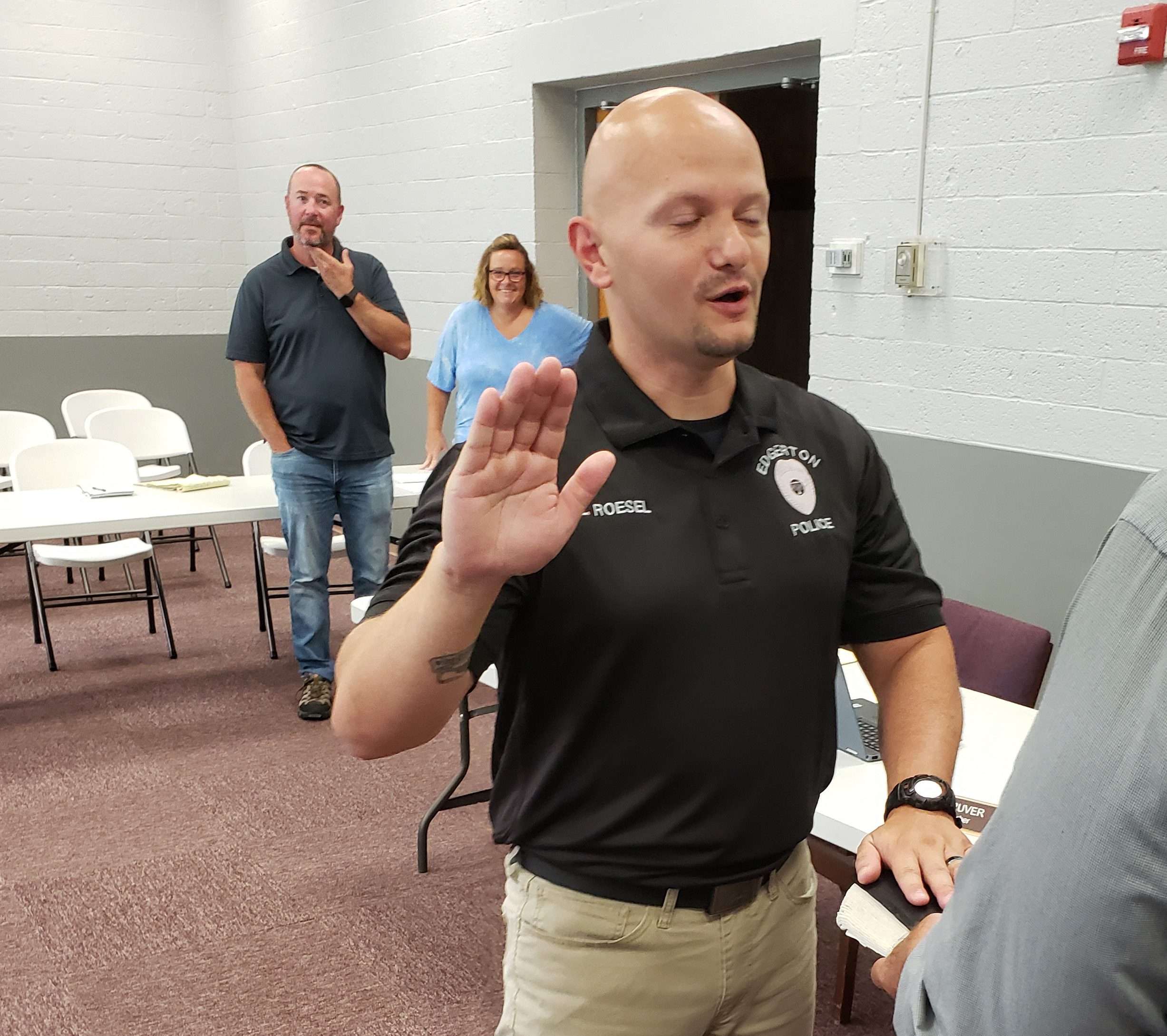 NEW OFFICER … Matthew Roesel was sworn in as a new member of the Edgerton Police Force, at the Edgerton Village Council meeting. (PHOTO BY DAN COOLEY, STAFF)

Before the Edgerton Village Council began on Tuesday night at 7, there was a 10 minute village records commision meeting that began at 6:50 p.m. Four things took place in that meeting.

After roll call, in which three of four members were present, there was unanimous approval of the previous meeting minutes, from January 19.

Next, with all documentation in the file, after approval from the Ohio Historical Society and the Ohio State Auditor, the tax records from 2013 have been destroyed.

Next on the agenda, for the next meeting on January 2022, the 2014 records will be brought to the Records Commission for destruction purposes. The meeting was then adjourned, by a 3-0 vote.

The Village Council meeting then began at 7 p.m., with the Pledge of Allegiance. Mayor Robert Day then led the group in a short prayer. With roll call, all six council members, Jason Gruver, Chuck Wallace, Leslie VanAusdale, Dean Thiel, Roger Muehlfeld and Tom Karnes, were present.

The first order of business was unanimous approval of the August 3 meeting minutes.

Next, the board gave unanimous approval of the hiring of three new part time employees to the Edgerton Police Department. The new hires are Matthew Roesel, Tracy Harding and Michael Thomas. On hand at the meeting to be sworn in was Roesel.

Next, administrator Dawn Fitzcharles reported that the tower has been repaired and is back in operation.“Thanks to the many who stepped up to get (the repairs} done,” Fitzcharles said.

“Thanks to the city of Bryan for helping out and to those who really stepped up,” added Day. “At one time, we had more volunteers than what was needed.”

In the fiscal officer report, after a quick review of the July finances and the credit card review, the board voted unanimously to pay the bills.

Next on the agenda, Fitzcharles reported that resolution number 2021-007, authorizing the tax levies, needed approval in order to be sent to the county auditor. The board voted unanimously to send the information on to the county auditor, so that the October deadline could be met.

Fitzcharles then asked for approval to send an application to the Ohio Public Works Commission, for a Railroad Street project. She estimated the cost to be $350,000.

“We are hoping to do this in conjunction with the storm drainage project,” Fitzcharles said. The board unanimously approved the application.

The board then unanimously approved resolution number 2021-008. The resolution authorized Fitzcharles to submit applications to the Ohio Public Works Commission, along with executing contracts, for emergencies.

That was followed by resolution number 2021-009, an emergency resolution, in terms with the national opioid settlement agreement.

Fitzcharles stated that Ohio Attorney General Dave Yost had asked numerous communities to join in the settlement. Mayor Day had already signed the agreement, which would give the Village of Edgerton $5900. The village could use this in a number of ways.

Needing approval from the council to execute the agreement, the council gave unanimous approval. Council also passed the resolution unanimously. Next on the agenda was getting approval to move forward with the Poggemeyer Design Group, in conjunction with the water tower rehabilitation project.

According to Fitzcharles, the inside and outside of the tower will be rehabilitated. Fitzcharles submitted a grant and said that the village hopes to get a response within the next 50 days.

She stated hat Poggemeyer will handle the engineering. Once executed, a minimum time frame for the project is five weeks, but could take as long as 15 weeks.

Fitzcharles needed approval from vthe illage council in order to move forward with the project and the council gave unanimous approval.

Next, after a long discussion about the village’s park board, VanAusdale made a motion “to have the village solicitor draw up language of who the park board is and what responsibilities they have.” The motion passed by a 5-1 margin.

That was followed by Mary Juarez, of Never Let Go Ministries, thanking the village for helping her secure a new building for her ministry.
They then entered executive session before adjourning.

Next, the village council will hold a special council meeting on August 31, at 6 p.m. The next regularly scheduled council meeting will take place on Tuesday, September 7, at 7 p.m.