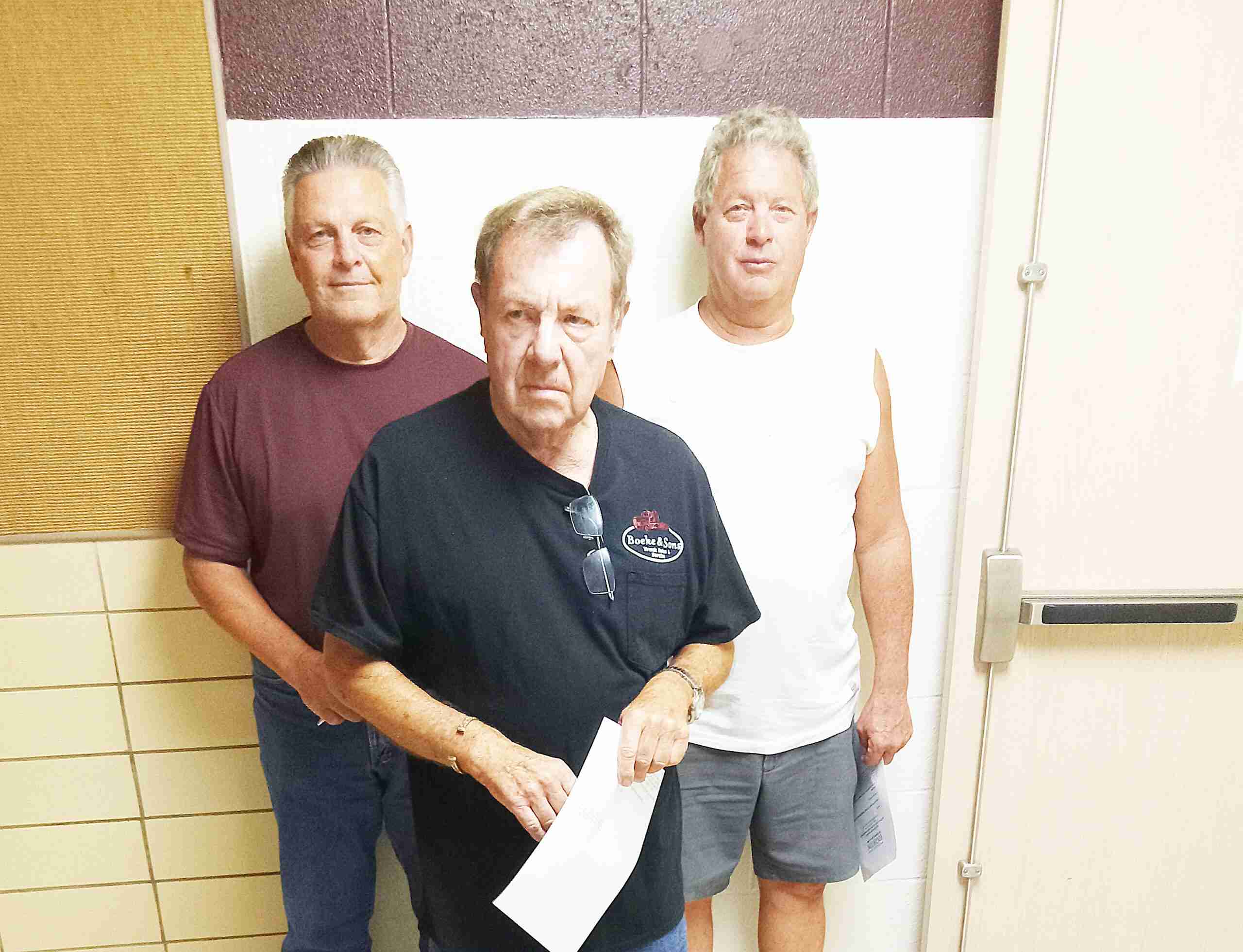 TAX LEVY … St. Joseph Trustees, left to right, are Roger Muehlfeld, Richard Moffett and Hugh Perry. The trio helped pass a resolution that puts a tax levy on the ballot that will help provide funds to the St. Joseph Cemetery. (PHOTO BY DANIEL COOLEY, STAFF)

The Edgerton Village Council had two meetings on July 19, beginning with a joint meeting with the St. Joseph cemetery trustees, at 6:45 p.m..

The joint meeting began with the Pledge of Allegiance, followed by a prayer from Mayor Robert Day. In attendance were St. Joseph trustees Richard Moffett, Roger Muehlfeld and Hugh Perry, along with council members Pam Wampler, Jason Gruver, Chuck Wallace and Tom Karnes.

First, council members and the trustees approved of the special joint meeting from July 5.

This resolution will now be filed with the Williams County Board of Elections. With the passage of the resolution, the council and trustees voted to adjourn the meeting.

The regular council meeting began at 7 p.m., with the Pledge of Allegiance and a prayer from Day. Council members attending the regular meeting were Gruver, Wampler, Wallace, Karnes and Sharon Blinzler.

In the administrators report, Fitzcharles stated that the ODOT salt contract, at $58.90 per ton, has been awarded.

In the fiscal report, Denise Knecht reported that the credit card review took place and the village is working on the budget appropriations.

Because of the rise in gas prices, the budget has been used up. An estimate will determine how much is needed to get through the year. Council then approved of the motion to pay the bills.

In the police report, chief Gary Plotts reported that some of the cameras have been installed and he hopes that all will be up and running in a week. Plotts stated that during this weekend’s homecoming festival (July 21-24), they will have full staff for the weekend.

Also, Plotts reported that police have bicycles out, to be seen by the public. Plotts said that there will be a bicycle safety meeting at the end of the month.

Plotts is also asking permission from council to move forward with a K9 program.

Most of the funding needed for the program has already taken place and the dog in place to be used is Jaxx, a two year-old Belgian.

Jaxx comes with a one-year health warranty and will undergo more training for six hours each month, at $60 per hour. each month, Plotts’ request could be voted on by council at the next meeting.

Mayor Day reported that among the events for the homecoming festival will be canoe and kayak races, a band, and fireworks. “It’s going to be an exciting weekend,” Day said.

Council then approved the motion to reclassify Devin Johnson, a fire department employee, from probationary status to regular employee status.

Next, council approved Resolution 2022-017. According to the agenda, the resolution provides “for the advancement of $15,998 from the general fund to the Ohio Department of Transportation safe routes to school fund and providing for the repayment of the advancement.”

That was followed by council approving Resolution 2022-018. Here the resolution allows for, according to the agenda, “the execution of the 2023-28 energy supply schedule with American Municipal Power.”