EDGERTON VILLAGE COUNCIL: Recognition Of Service Given During Council Meeting 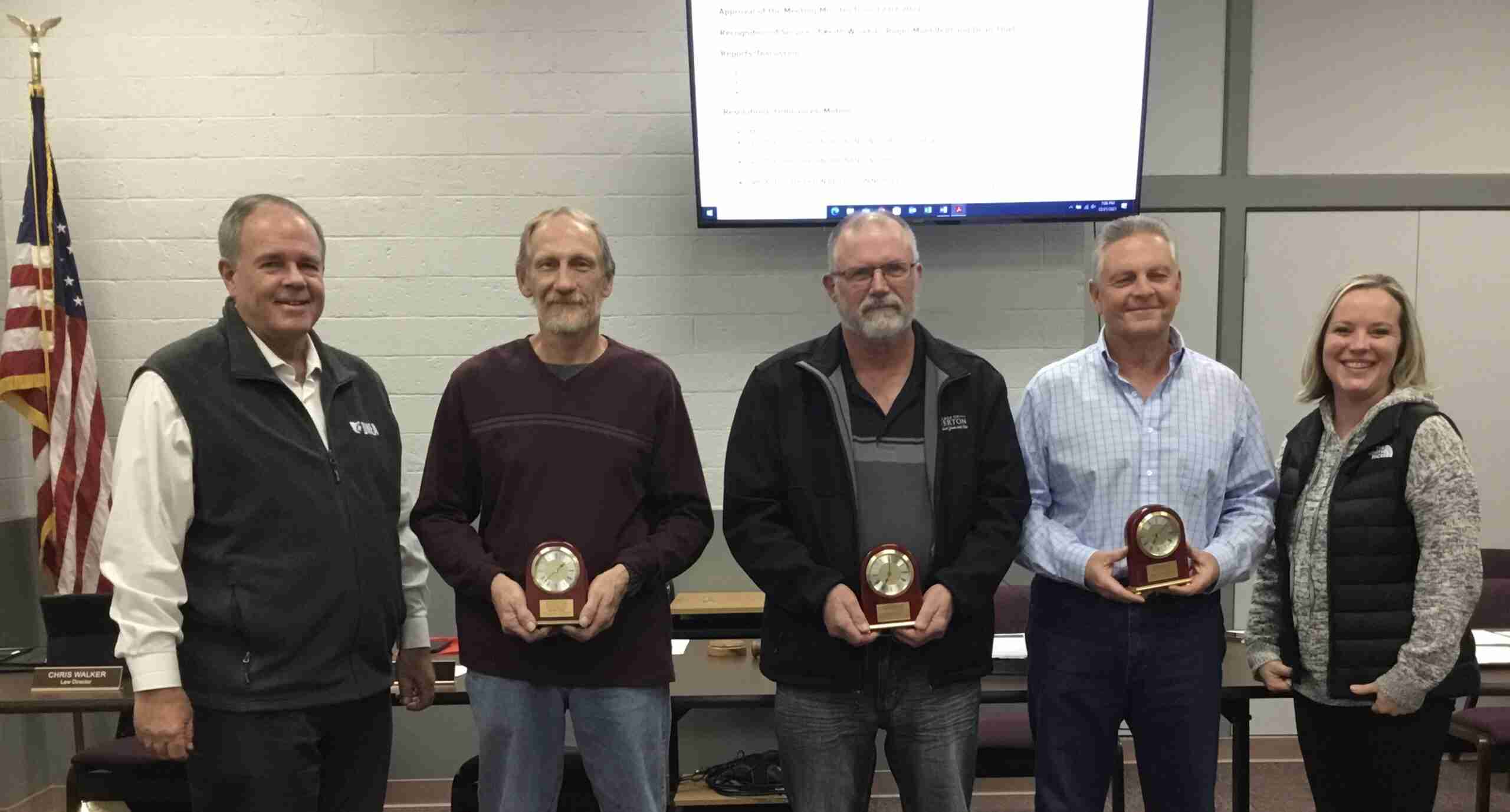 One was to correct her last name as it had been put in as her maiden name and the other was that she would like the minutes to reflect the reason she voted no on the “Sharing of Sick Leave” was that she wanted time to process. The changes were made and council voted to approve the minutes as amended.

Time was taken at that point to invite three gentlemen to the front of the room for recognition. Keith Winebar was given a clock by Mayor Bob Day and thanked for his six and a half years of service to the village in his parks job. Day mentioned that they might ask him to serve on a part time basis in the near future. He is retiring on December 31, 2021

Police Chief Gary Plotts introduced Ashley Eberly, thanking council for letting him move to a full-time opportunity on the force.

He said she has been doing a good job and “knows the ropes” and transition is working out well. The policy and procedures are in draft and will be brought to council when ready to replace the old. Spillman system is up and running and will help tremendously with a master name list.

The new cruisers are just waiting on gun racks and will be finished soon. Ashland Morey would also like to join the force on a part-time basis, from dispatch in Napoleon. References gave high praise and he is happy to welcome her as well. Fitzcharles presented motion to put her in on probation and council approved the motion.

Fitzcharles reported that they in the office are working hard to get all the 2021 business wrapped up. She said she is excited about all the plans for 2022.

Fiscal Officer Denise Knecht asked for signatures on credit card report and dittoed what Fitzcharles said about year end work in the office. She also asked for and received approval for payment of the bills.

In legislative action the council voted to approve:
-Fire Contracts for St. Joseph and Milford Townships ( Center needs renewal in 2022)
-Ordinance 1087 (3rd and final reading) amending section 139.01 of the codified ordinances of the Village of Edgerton
-Ordinance 1091 (annual housekeeping item) providing for a supplement to the 2021 annual appropriations
-Resolution 2021-013 A resolution terminating Community Reinvestment areas #1,2 & 3 in the village of Edgerton and declaring an emergency

(Solicitor Chris Walker explained that he put this in as an emergency because “it is just cleaning up” and will be certified as soon as they pass it. He pointed out that it could be done with three readings but if they want to get it done more quickly they could pass as an emergency.)

A power point was shared by Fitzcharles explaining all the details surrounding the Fire contracts with the townships.

She stated that in the past there had been some contention over the way the charges were determined so this clarifies that and makes the figures more “reasonable and fair.” It covers St. Joe, Center and Milford Townships.

She said that as they went over this recently there was no contention and all are in agreement with the solution. A method developed by a gentleman in the VanWert City Fire Department, and used also in Bryan, has been adopted as it allows them to deal with the fire protection costs in a fair and equitable way.

Mayor Day mentioned that he would be reading the list of all who passed away in 2021, at the center of town Christmas tree or in the bandstand, on Christmas Eve at 7 p.m., as it was so appreciated last year. He said it would be an informal gathering.

Fitzcharles reminded everyone that the offices would be closed in observance of Christmas, on December 24 and 27. She then asked for discussion and a decision concerning a “pile up” of vacation hours for two of the village employees.

She explained that they were unable to use their hours due to the need for them to be at work for the village. Following some discussion a motion was made to pay the two employees for those hours, and start fresh in 2022, instead of carrying them over.

There was concern that the hours would just keep building and “get worse,” so council agreed to pay them for the hours. It was mentioned that it is desirable for the employees to use their vacation hours as rest is needed. Council voted to approve the motion to pay the vacation pay.

In Council comments:
-Chuck Wallace reminded that picnic tables need to be put away for the winter.

-Roger Muehlfeld welcomed Pam Wampler to the council and encouraged her as she moves into that position. He also said he has enjoyed his time on Council.

-Jason Gruber asked about tree trimming and Fitzcharles said it might happen between Christmas and the new year, but also it could just be bumped into January depending on when the company can get to Edgerton.

He commended the office employees for their end of year hard work, and thanked Thiel and Muehlfeld for their service on council.

-Dean Thiel said “Thank you for allowing me to serve the community in this way.

With no further business the meeting adjourned. The next council meets on Tuesday, January 4, 2022 at 7 p.m.