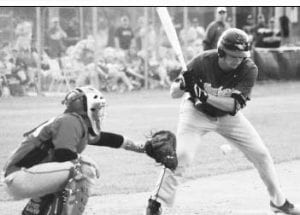 Edon wanted a chance at a rematch with Ayersville after falling to the Pilots 7-6 in last year’s District Final. After waiting while the game was postponed twice, the Blue Bombers made the most of the opportunity defeating Ayersville 6-2 in the Division IV baseball District Final at Bryan on Sunday evening. Edon hit the ball very well in their semifinal win over Hicksville and that continued versus Ayersville. Edon’s Austin Kiess doubled off of Ayersville pitcher Kasey Williams to start the 1st inning. The Bombers followed a single, another double, and a walk and just like that Edon quickly had a 2-0 with runners on first and second with two outs. Williams escaped the rest of the inning with no further damage done and it was 2-0 Edon after the 1st. Kiess provided more fire power in the 2nd with a RBI double to make it 3-0 and still runners at second and third and only one out. Williams then attempted a pickoff play at third but the throw was off line and both runners scored on the error making it 5-0 Edon and forcing Ayersville to get their ace pitcher Dauson Dales ready in the bullpen. The Pilots went quietly in the bottom of 2nd, keeping the Edon lead at 5-0 with Dales coming in to pitch for Ayersville in the top of the 3rd. Nathan Vold started the bottom of the 3rd inning for Ayersville with a leadoff single, but that was followed by a strikeout and then a double play to end the inning. Dales calmed the Edon bats by retiring nine batters in a row and the score remained 5-0 Edon going to the bottom of the 5th. Edon starting pitcher Levi Brandt found some trouble in the 5th after giving up a two out walk and hitting a batter. With two Pilots on base and Dales coming to the plate, Edon brought in Braden Miller in relief of Brandt. Dales would hit a rocket but right at Edon 3rd baseman Daryke Bass to end the inning with Edon still leading 5-0. Ayersville got on the board in the 6th has Williams started the inning with a triple, the first extra base hit of the night by Ayersville. A Jaylon Martinez groundout scored Williams from 3rd to make it 5-1. That remained the score until the top of the 7th when Edon added a run to make it 6-1 going to Ayersville’s final at bat. Ayersville (14-12) benefited from back to back errors by Edon to narrow the gap to 6-2 but that was as close as they could get. Edon (13-10-1) moves on to face Leipsic on Thursday, May 25th in a Regional Semifinal in Hamler beginning at 5pm.