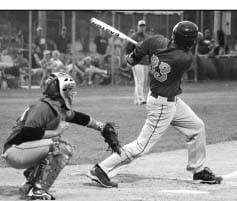 The sixth inning proved to be the difference in this District Semifinal at Bryan on Wednesday, May 17th. Hicksville, who were their own worst enemy at times with five errors through the first three innings and seven for the game, were able to string together three straight doubles and score three runs in the bottom of the 4th to trim the Edon lead to 4-3. Each team scored a run in the 5th to make it 5-4 moving to the pivotal 6th inning. The Aces (15-11), made a pitching change bringing on Jake Greer to face the Blue Bombers. Greer was able to record a couple outs along with two walks before facing Edon’s Braden Miller. Miller then drove in those two baserunners with a triple and the Edon (1210) lead was now 7-4. Austin Kiess would then come to the plate and crush his second triple of the night; that scored Miller from third base and it was now 8-4 in favor of the Bombers. Edon wasn’t done in the inning though as Levi Brandt reached on an error that allowed Kiess to score and make it 9-4. Carson Brandt then joined in with a double, scoring Levi Brandt, and it now a 10-4 Edon lead. Carson Brandt later scored on a wild pitch and when the dust had settled it was 11-4 Edon after the six run inning. Hicksville wasn’t able to find any offense in the sixth or seventh innings and Edon came away with the win. Edon then faced the Ayersville Pilots in the District Finals at Bryan. This was a rematch of last year’s Division IV final at Archbold that was won 7-6 by the Pilots. The winner of this game advanced to Regionals at Patrick Henry to face the winner of Kalida-Leipsic.