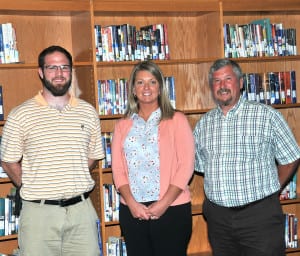 By: Lucinda Held-Faulhaber
THE VILLAGE REPORTER

Addressing annual routine matters and awarding personnel contracts for the next school year were just some of the agenda items taken up by Edon Northwest Local Board of Education during its regular session held Tuesday, June 23, 2015 in the Media Center. President Jamie Schaffter called the meeting to order with all members and five guests in attendance.

Additionally that evening, highlighted Reports were presented to the Board as well:

Superintendent John Granger:
•Noted a recent letter from State Senator Cliff Hite indicated the District is projected to receive a 12.5 percent increase in funding (from the last fiscal year) and a 3.5 percent increase the following year; further details will be available once the State’s Biennial Budget is passed.
•Offered Board members information on NEOLA, Inc., a School Board policies provider, to peruse before July’s meeting; although much easier to follow than current policies from OSBA (Ohio School Boards Association), switchover cost to the District is estimated at twenty-four thousand dollars.

Grades 7-12 Principal Anthony Stevens:
•Congratulated the Class of 2015 on their fine achievements; thanked faculty and staff, as well, for all the work done in making sure students were prepared to successfully reach this point in their high school career.
•Shared the planned June 20 Golf Outing fundraiser (to help defray costs for improvements to the high school gymnasium’s sound system) has tentatively been rescheduled for Saturday, July 18; community support for the event is greatly appreciated.
•Noted twelve students took part in last month’s High School Credit Recovery Intervention program, receiving the full amount of credit available to them; Summer OGT testing is completed and Spring OGT results were above (and many well above) the State average.

Treasurer Bill Blakely:
•Submitted his standard SM2 Report indicating revenues were down thirty-six thousand dollars and expenses up two hundred thousand dollars for the same eleven-month period as last year. The District is tracking two hundred thirty-six thousand dollars worse than a year ago.
•Shared State Biennial Budget updates (currently back in negotiations); some form of the Budget, even if only temporary, is expected to be passed prior to its July 1 deadline.
•Noted eighty-two days of cash is available in the general fund to operate the District if no further cash is generated.

Buildings/Grounds/Transportation Committee:
•Learned the annual bus inspection went well; the District’s Bus Fleet passed on its initial attempt. Thanks were extended to Todd Muehlfeld and Steve Livensparger for their efforts in preparing all busses for the early spring assessment.
•Noted the District sign at West Indiana and Webster Streets would be taken down.
•Heard improvements to Leanne Field and bus garage parking areas had been completed together with Mark Trausch and M & M Asphalt; Turnpike asphalt grindings were crushed, spread, rolled and leveled into a six-inch base for less than seven thousand dollars.

In other business brought forward, the Board:
•Accepted, with thanks, Cash Donations during May from CM Closeout/Cheryl Burlew ($50/Band and Choir Washington DC Trip) and Ohiopyle Prints from sales at Kaiser’s Supermarket ($15.20 shared equally between Elementary and High School Funds).

•Accepted the $21,411 bid from Fritch Construction and Excavation LLC for the campus tiling project; drainage issues will be corrected before mid-August (new catch basins, improvements to existing basins and the usage of double-walled tile). Costs are covered by Permanent Improvement Fund monies.

•Renewed two separate Cafeteria Software Maintenance Agreements with Esber Cash Register for 2015-2016 at a cost of $936 and $1275.

•Granted permission to participate in all federal programs for the 2015-2016 fiscal year (community and parental input is welcomed and appreciated!) as well as participation in the 2015-2016 Federal Lunch and Breakfast Programs, including the commodity program and free and reduced lunches and breakfasts.

•Approved the agreement with Northwest Ohio Juvenile Detention Training and Rehabilitation Center for 2015-2016 at a cost of $38 per day per student placed there.

•Voted to enter into Executive Session prior to adjournment for the expressed purpose of discussing compensation of personnel; no action was taken.
The Edon Northwest Local Board of Education will next meet Tuesday, July 14, 2015 in the school’s Media Center beginning at 5:30 p.m.

Be the first to comment on "Edon Northwest Local Board Of Education Approves Annual Routine Matters; Personnel Contracts"